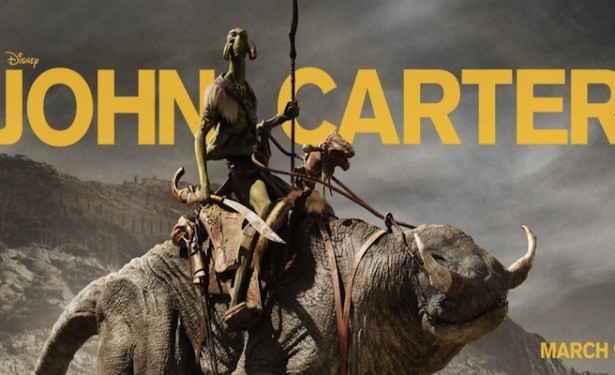 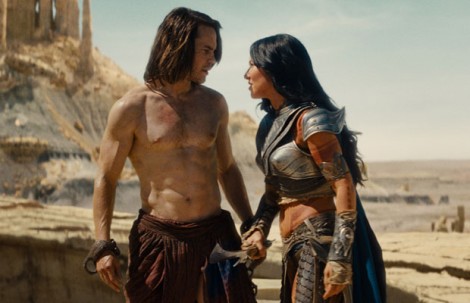 Summary Judgement: A convoluted pastiche of poorly aged source material that yields an utterly forgettable plot despite the best efforts of the actors.

John Carter is probably the first time I’ve hoped that a screen adaptation would depart from its source material. Edgar Rice Burrough’s Mars series is, at best, a quaint reminder of how much the novel, as a literary form, has evolved since the current generation’s great grand fathers fell in love with a swashbuckling Virginia-man teleported to the red planet. On some levels, John Carter rises above its more colonial and paternalistic roots. The problem is that it does so in the most bat-shit crazy way a person could imagine.

The plot is simple yet, for any viewer not initiated into Burrough’s mythology, likely Byzantine in its complexity. I shall attempt to distill it down to component parts. Contrary to what we think, Mars, called Barsoom by the natives, is not dead; it is however, dying. Upon the surface of this world there live a number of sentient races. For the sake of this movie they come in three flavours: Red, Green, and White. Nothing says 19th century colonial attitudes like reducing people down to the colour of their skin.

At this point, I suspect anybody who has read A Princess of Mars is throwing out the bullshit flag on the grounds that the Therns don’t show up until the second novel and are not shape shifters. Quite right. This movie takes elements of Princess of Mars and Gods of Mars and glues them together without any warrant for how well they fit. Now back to the movie plot.

The central conflict within the story focuses on the warring Red Martian city-states of Helium and Zodanga – which for some reason is a mobile city that is somehow destroying the planet. The details never really get explained. Things were going well for the Helumites until the Therns gave Zodanga a technological edge in the form of a McGuffin called “The 9th Ray”, which is your basic kill-all death ray. Said ray is never really explained, despite having an origin in the book. I can only imagine how confusing the movie’s “physics” will prove for neophytes to the story.

Zodanga’s Jeddak (Martian for King) Sab Than (Dominic West), at the demands of the Therns, who come off as nothing but tired clichés of “power behind the throne” bad guys, offers Helium a truce. If Tardos Mors, Jeddak of Helium, (Ciaran Hinds) agrees to marry his daughter, Dejah Thoris (Lynn Collins) to Sab Than, the latter will spare Helium from destruction. Enter John Carter (Taylor Kitsch) to save the day, that is after he A – plays through the tropes of being the damaged hero who finds something new for which he should fight and B – acts his way through a god-awful twenty minute Martian remix of Dances with Wolves. The months that Carter spent learning the customs, traditions, and language of the Green Martians in the book is literally reduced to a sip of magic know-all potion.

At this point I’d like to remind you, my good reader, that this is me trying to foist a bit of order on this story. The movie itself is not nearly as considerate. Like its protagonist, John Carter makes mighty leaps from one plot point to the next, never really connecting things together in a meaningful way. Everything in the story depends on iconography (Helium=blue banners=good / Zodanga=red banners=bad) and menacing looks from Therns to fill in the background. Again, as I know the books I could grumble about the script’s complete hack and slash job. Put in broader strokes, though, I don’t know how an outsider could approach this movie and see anything other than a shallow depiction of, and do pardon the phrase, Cowboys and Indians…on Mars. Even so armed with my foreknowledge, by the time I realized it was the third act, and thus time to start caring, the big dramatic battle was over. John Carter had saved the day, slain the bad guys, and won the girl.

NB: There’s no premarital sex on Mars. You marry a girl after knowing her for a week. Or maybe that’s just how they roll in Virginia.

The film accepts as a matter of fact the now disproven science that drove Burroughs novel vis-a-vis Mars’ thin atmosphere and lessened mass accounting for John Carter’s physical strength and ability to leap tall buildings in a single bound. Fair enough as the story falls apart without turning John Carter into Superman. Of course, I didn’t think it necessary for the story to stop and take a moment to comment on its own implausibility. There’s a scene when Matai Shang (Mark Strong), King of the Therns, captures John Carter. The Thern not only reveals that his kind have been to Earth on many occasions, but that they should have been able to account for Carter’s physiological abilities. Duh! Really? You’d think the Earth’s mighty gravity crushing their puny Martian bones once they set foot upon the planet would have been the first clue. It’s hard to believe that Andrew Stanton, a man who has earned Oscar glory for his writing and directing, would let that bit of dim-witted dialogue slide. Suspension of disbelief is one thing; when a movie points out that I’m using it, that’s a very different matter. Such actions presume stupidity on behalf of me and the rest of the audience. For shame sir, for shame.

The acting is the only thing that offers an ounce of redemption for this movie. Bryan Cranston has a bit role as a Union Colonel that attempts to draft Carter into the Arizona Territory Cavalry. Lynn Collins is okay as Dejah Thoris. She plays a very much retconed character as compared to what is found in the novels. Yet despite being a skilled fighter and the Regent of Helium’s scientific academy, Dejah still evokes her plot fodder origins in announcing her need for John Carter to save her people and by default herself from a political marriage. I only really wrote her off as a character when the Princess of Helium expresses her wants in the form of a temper tantrum followed by an emotional breakdown in the desert. Source material or no, I don’t buy a warrior-scientist-princess having a tantrum.

As for Taylor Kitsch as John Carter, he had the hardest job of all. To my modern eyes, John Carter is a bit of a despicable character. First and foremost he’s a proud Virginian and ex-confederate officer. Nobody born north of the Mason-Dixon line within the last fifty years is going to connect with that. Although the film iteration of Carter is a man who, at first, refuses to fight, he does so not because of the horrors of war. Rather his reticence stems from the death of his wife and child while he was fighting for the Confederacy. Sorry, Disney, but that doesn’t remove him far enough from Southern roots and ideology for me to get in line behind this guy. Combine that with the fact that Carter, in the novels, has the personality of a Turnip, and there’s not a lot for an actor to work with. So Kitsch tries hard. But when the story has all the inherent accessibility a chess match as recorded in Farsi, there’s only so much a fellow can do.

All that said, I want to know who is going to go see this movie? Hard core fans of the books will likely be put off by the huge inaccuracies in translation between novels and screenplay. Neophytes will spend two hours scratching their heads wondering what exactly is going on. Being that it’s a Disney movie there’s not enough violence, explosions, or cleavage shots to really hold the “action” movie junkies either. Nor do I see watching this movie in 3D as a particularly strong selling point. If we take away all those groups, who is left?

For my time, John Carter is little more than a way to burn two hours and $20. Despite its best efforts to be the first blockbuster of 2012, the movie is only slightly more interesting than taking a nap. The plot is disjointed; the writing is dreadful, and the acting suffers because of the writing. Know that only insomniacs and the morbidly curious should pay premium money to see this in theatres.