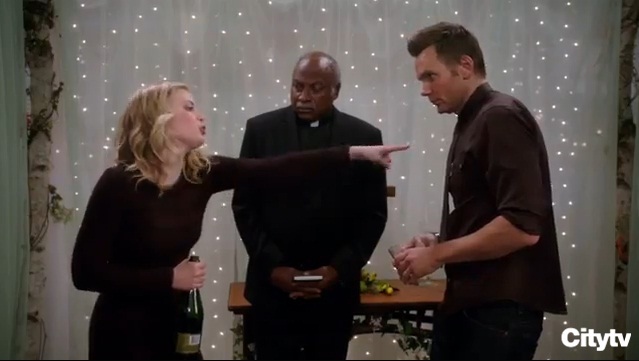 Summary Judgement: In what is possibly the safest episode it has ever done, Community goes meta on being normal and manages to pull it off.

““Urban Matrimony and the Sandwich Arts” was a safe episode of Community. For that reason, some of the series’ more gung-ho fans might have been a bit put off. The usual irreverence was in play, but not withstanding three references to Inspector Spacetime something was missing. The comedy was, for want of a better word, normal. In fact it was downright pedestrian. I mean, a wedding episode? What’s that all about, right? Fans didn’t spend the last three months holding their collective breath to see Shirley (Yvette Nicole Brown) get married. This isn’t Friends. We’ve been waiting for the satire that presumes equal knowledge of popular culture and high culture. We wanted You Don’t Know Jack and Dan Harmon and team gave us Jeopardy. Or did they?

Well yes, they did a little. But with good cause and in the spirit that makes Community work as a show.

According to TVLine, the Ides of March saw Community pull in 4.9 million viewers. That is a 36% increase from “Regional Holiday Music” and a 20% increase from season three’s premiere episode. Fun fact, The Office also pulled in 4.9 million on March 15th. Accounting for word of mouth, DVD sales, Netflix, and Hulu I think it is safe to assume that this boost represents a large number of freshman Community watchers. Bearing that in mind, Community’s return to television glory couldn’t be a balls out meta-Voltron that saw Jeff (Jole McHale) piloting Black Lion into battle against Pierce (Chevy Chase), who was supposed to be King Zarkon but got the costume wrong and showed up as an ice pirate. All the newbies would get scared away. Instead we got an extended version of Jeff’s dream from the first episode of the season.

The song says it all: “We’re going to have more fun and be less weird.”

And that’s exactly what Community did to usher in its return. It went meta on itself and being normal. For what is more normal than a man and a woman getting married? What is more normal than having to put on a false facade as a wedding guest for fear of offending people with non-inclusive small talk? It’s all nice and happy and normal until the line between being yourself and being the fake person that you have to be to fit in becomes blurred.

As a former lawyer, Jeff Winger should have no problem coming up with a polite toast for Shirley’s second wedding to ex-husband Andre (Malcolm Jamal Warner). The cornerstone of the legal profession is saying one thing and meaning another. Yet Jeff ends up going on a bender as he fails to reconcile his belief that marriage is a dead institution with the fact that he genuinely cares about Shirley. Britta (Gillian Jacobs), who has spent her life eschewing cookie cutter ideas of orthodoxy, collapses into alcohol’s warm embrace when she realizes her natural talent as a wedding planner. A well meaning gesture intended to free up Shirley’s time forces Britta to confront the fact that she is, quite likely and despite her best efforts otherwise, a normal hetero American woman. For Britta there can be no greater crisis of identity. Meanwhile, Troy (Donald Glover) and Abed (Danny Pudi), suspecting that their natural personalities will ruin Shirley’s big day, take to a 24-hour nerd out to purge themselves of whimsy. What remains are two seemingly self-effacing guys in suits whose attempts at being normal come off as condescending to Andre. The enduring message is pretty clear; attempting to adhere to artificial standards of normality makes a person crazy, just like Annie (Alison Brie), whose next mental breakdown is always lurking just beneath the surface of her calm exterior.

So when Abed and Troy turn their back on dancing like idiots and begin to suspect that Blorgons have found a way to assume human form, they do so not only to reclaim their true identities, but to implicitly call out all the other party guests as frauds. The subtle extension is that network television/the world/whoever should cease their attempts at foisting normality on things that are best left to their own devices.

“”Be yourself, because we sure as hell are going to be.” Despite some indications otherwise, that’s the take away message from last night’s episode. Perhaps it’s a slower start than some people wanted, but it’s the best way to give new viewers a solid foundation upon which to stand before things start to get weird.

Welcome back, Community. We missed you.