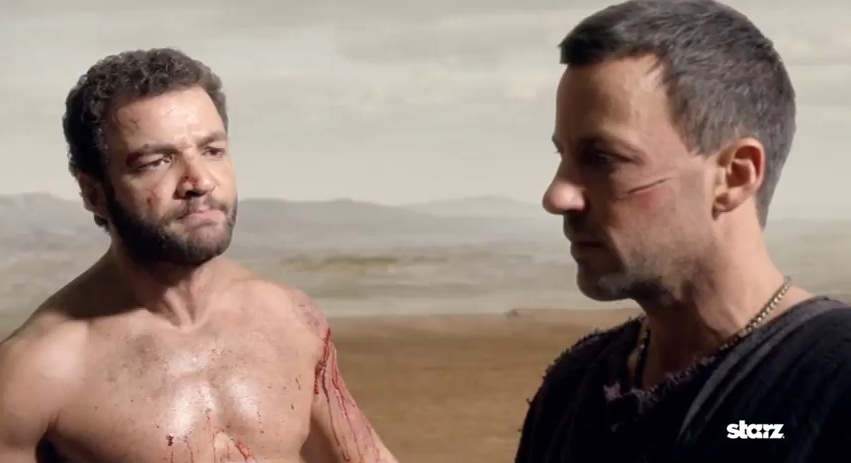 More minor characters die, Spartacus gives a couple of speeches, and something unexpected happens to Lucretia. This week on How Glaber Got His Groove Back Spartacus: Vengeance

I don’t want to say that “Chosen Path”, Spartacus: Vengeance’s sixth episode, squandered the momentum that last week’s “Libertus” built, but it’s hard to keep an objective eye and not feel that something is missing. Perhaps it is a decent plot for Spartacus and Crixus? Despite the writers’ best(?) efforts to make the eponymous character more important to the overall story arc, I think it’s fair to say that the main thrust (no pun intended) is being directed toward the Romans in Capua, rather than the slave army gathering at Vesuvius.

Speaking of thrusts, Ashur raped Lucretia. Look, there’s no good way to segue into a scene about non-consensual sex; I stand behind my wordplay. That said, this was arguably the most powerful scene of the season, if not the entire series. It came in the aftermath of Ashur beating down three Roman Legionaries as a way of proving to Glaber that gladiators are “no mere house slaves”. Within his cell, Lucretia challenged a beardless Ashur as to how Glaber could have discovered Ilithyia’s abortion vial. Rather than allowing himself to once again fall under Lucretia’s yoke, the former gladiator revealed that he was Glaber’s man before extracting a little revenge for past indignities. You’d think that after all the perversions and hedonism that this show has piled on, seeing one character rape another would be a matter of course; it’s not. The fully clothed scene with tight shots on the faces of Nick Tarabay and Lucy Lawless was chilling to say the least.

Were that things so well scripted within the camp at Vesuvius. In a word, Spartacus’ plot arc is boring. When the Romans talk they do so to move pieces on the chessboard. But when these former slaves chatter, nothing much comes of it.

After an attempt at sex sends Naevia into flashbacks, she spends most of her screen time trying to tell Crixus that she has some serious PTSD. While it’s interesting to see a broken character in the show, this tertiary plot point is coming at the expense of more relevant ones. I’m tired of hearing Spartacus spew clichés about putting thought to purpose before recycling the same old speech about freedom. It’s tedious to see Oenomaus collect beat down after beat down. As for Crixus, where’s the former champion? Who is this giant teenage boy that spends his days having tantrums and moaping? Is there a point in Gannicus making everybody feel bad about their quest for freedom? Why is the blonde haired former slave that used to be sleeping with Rhaskos, but never actually had her name said until Mira killed her at the end of the episode because she was going to betray the slaves to Glaber for a bounty, somebody the audience should care about?

The acute problem of removing half the interesting characters from the ludus grows more chronic with each passing minute. Half the show’s leading men have no character interaction save for with each other. When they do trade a word or two it’s always about practical matters of survival. Turning Spartacus and Crixus into allies killed all the dialogue that emerged out of their animosity. This is the reason why material that should land on the cutting room floor is making its way into the show. With nothing better going on they might as well explore Agron and Nassir’s budding gay romance.

Sidebar: Anybody else expecting a reveal that sees Nassir and Ashur turn out to be brothers?

Thank the gods for the Romans then. When the former slaves went back to Vesuvius to scratch their heads and contemplate the meaning of freedom, Glaber ran with the ball. In earnest, this is Glaber’s episode. He’s no longer the reflection of perpetually screwed over Batiatus, but rather a pissed off ex-General with a new supply of political capital. In his first scene, we see Glaber directing the wealth of his dead father-in-law’s estate into the hunt for Spartacus. He’s also made it perfectly clear to Ilithyia that she lives only so long as the unborn baby does. And for reasons that are revealed in the episode’s final scene, Glaber has charged Ashur with rounding up a small contingent of Capua’s most undesirable henchmen.

Glaber’s actions drive the emotional train wreck that is Ilithyia further into the arms of Lucretia. Playing the role of a wise older sister, Lucretia counsels submission and devotion as the best tools to win back her husband’s favour. A gambit that Ilithyia readily employs when she suggests to Seppius, who was attending another of Praetor Glaber’s “let’s work together meetings”, that his sister join her and Lucretia for some group mourning. The subtext of this meeting is that Ilithyia and Lucretia will woo Seppia to get to Seppius. To her credit, Seppia proves smarter than she’d let on in the past as she calls out the sham. As it happens, her promise to talk to her brother, despite the misdirection, amounts to little. Enter Ashur.

The episode’s final scene sees familiar thugs killing slaves and citizens alike within a Roman villa. Ashur and Glaber emerge from the shadows, with the latter placing boot upon Seppius’ neck. Proclaiming himself as anything but the fool people assume him to be, Glaber snuffs out Seppius life, the life of a Roman nobleman, simply to acquire the troops under his command.

So there’s the trade off. We endure Gannicus trolling people and extras elevated to the level of minor characters in exchange for having Glaber emerge as a worthy successor to John Hannah’s Quintus Batiatus. Perhaps next week the writers can give Liam McIntyre some dialogue that actually lets him act rather than orate.