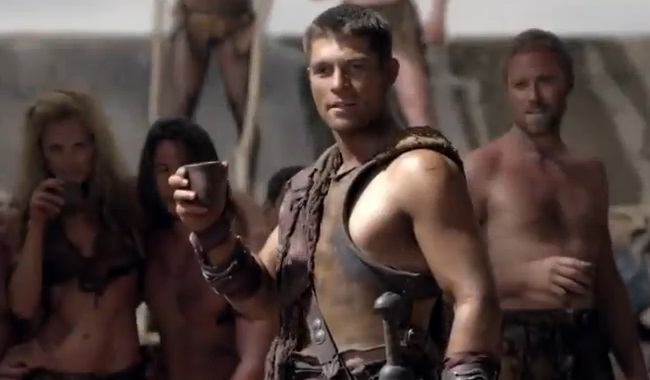 Misdirection was the word of the day for “Monsters”, the penultimate episode of Spartacus Vengeance. Yet with Spartacus making speeches in two out of his first three scenes, I feared another painfully talkie episode. Thankfully, I was proven wrong. Though getting from A to B was perhaps a bit too easy of a plot twist.

The story picks up with Ilithyia returning to the former house of Batiatus. After opening the door but before passing out, Ilithyia notices her husband wrapped up in Seppia’s arms. When the Praetor’s wife wakes up, she finds herself in the villa’s guest bedroom. Glaber initially greets Ilithyia with what seems like genuine concern. Of course, his facade of support quickly gives way as he attempts to use the details of his wife’s captivity to divine the location of Spartacus’ camp. When Ilithyia presses Glaber on the nature of his relationship with Seppia, the Praetor admits to the liaison and reminds his wife that he is a monster of her own making.

Back at the rebel camp, all is not well; so what else is new?

Spartacus, Crixus, and Gannicus, all clad as legionaries, scale the temple’s wall, walk through a warren of sleeping Germans and Gauls, and make it into the inner sanctum before Naevia sounds the alarm. After making another one of his bland speeches (Seriously, if the writers gave Liam McIntyre a chance to act rather than orate, he might make a great lead) Spartacus sets the camp to training. Unfortunately for the would-be army, petty grudges have given way to disharmony. In Crixus’ words, “We are but flailing fingers when we ought to be closed fist.” So Spartacus enacts a plan. He has Agron knock over a wagon full of wine so the rebels can spend a day drinking and bare knuckle boxing to settle old grievances. But before that kicks off, Mira finds the time to corner Spartacus to talk about their relationship. It’s all rather trite on that note.

Spartacus: You shouldn’t have tried to kill Ilithyia…

Blah blah blah. The fast version is that Mira wants “more” and Spartacus is damaged goods what with it being less than a year since he held the bloodied corpse of his wife. So they sort of break up. Which means that Mira is probably going to die next week.

Other events shape up like so: Agron and Crixus settled their differences after being jointly beat up by Oenomaus and Gannicus, who proved that they can work together despite the latter’s habit of nailing the former’s wife which indirectly killed said wife. I know everybody has to pull together during a time of crisis, but this just seemed a little too contrived for my taste. I liked the tension between allies. Hopefully this “friendship” paves the way for more meaningful deaths next week.

In case you haven’t figured it out yet, I think next week is going to be a main cast blood bath.

Okay, back to Capua where Glaber and Ashur are meeting for a planning session. Despite narrowing the range of possibilities for Spartacus’ base of operations, the Praetor still has too few men and too large of an area to search. Enter the Greco-Roman god of plot convenience bearing the head of dead Lucius. Contrary to popular belief, dead men do tell tales in ancient Rome. Ashur’s connections managed to identify Lucius and trace his home to the Greek temple at the foot of Vesuvius. Armed with that information and Ilithyia’s vague descriptions of where she was held, Glaber plans to march on the rebel camp – a camp where, in case you forgot, they’ve spent the day drinking and fighting.

For his part, Ashur is offered a place at the Praetor’s side during the coming battle as well as Roman citizenship, possession of the ludus and marriage to Lucretia. He conveys this information to the widow Batiatus as a preamble to yet another implied scene of non-consensual sex. I really used to love Ashur as a character. Now, I’m a little torn. Emotionally, I know I want him to die for his sins. From a narrative point of view, I wonder what role he could serve in the show next season when Pompey and Crassus replace Glaber and Varinius. Yet some twisted evil part of me likes having a character who works toward his own goals without any limitations or moral compass.

Anyway, the stage is finally set for some action. Right? Wrong. Along comes Seppia. No longer apt to be bound to Glaber, Seppia summons Praetor Varinius to Capua with news of Ilithyia’s disappearance and proof of Glaber’s role in her brother’s murder. But by the time Varinius arrived in Capua, Ilithyia had returned to the villa. Also Seppia’s proof of Glaber’s murder, the snake bracelet in Ashur’s box, is laughable in Varinius’ eyes. Needless to say, the Praetor is quite pissed off. The only balm for Varinius anger is the Senatorial order that he carries demanding Glaber’s recall. Since ignoring the order would mean the end of his political career, Glaber acquiesces and makes preparations to return to Rome. This leaves Varinius free to take care of Spartacus.

Poor Seppia is now at something of a loss. Knowing that Roman law will not see justice done, the young Roman noble confides in Lucretia. For her part, Lucretia offers a dagger along with the suggestion that she take matters into her own hands.

This is where the misdirection starts happening. The writing leads the audience to fully buy into the idea that Seppia is going to put a knife into Glaber’s back. Moreover, Ilithyia talks to Lucretia about wanting her life back, and how that can only happen through blood. It makes perfect sense for Lucretia to agree with this sentiment as Glaber’s death means the end of Ashur’s hold over her. When nervous Seppia enters the bath and trades lines with Glaber about returning to Rome, it seems like his fate is sealed. Like a good little Roman wife-in-training Seppia strips the Praetor of his armour and clothing. Then she smashes an amphora of wine against his face. Blade in hand, Seppia is positioned to slay Glaber. Who would have expected Ilithyia to cut Seppia’s throat before she could finish off the Praetor?

Lest we forget, this is ancient Rome. Women are the property of their husband, father or nearest male relative. Ilithyia has none of these save for Glaber. The only life she could get back is the one of privilege that comes with being a kept woman. It’s the ideal solution for Lucretia, as well. A Glaber tempered by Ilithyia will allow Lucretia to come to Rome, rather than languishing in Capua as Ashur’s concubine.

Blood stained and stunned, Glaber asks why Ilithyia would save him. Ever the puppet master, Ilithyia reminds her husband that she is a monster as well. Further she suggests that they should turn their venom outward to set fire to the heavens. Encouraged by his wife, Glaber sets out for Vesuvius.

At the rebel camp, Spartacus stands vigil over his now unified troops. After trading some words with Gannicus, he happens to see a signal fire from one of his lookouts atop Vesuvius. It can mean only one thing: a Roman army approaches. How lucky it is that he looked up at the exact right moment upon the conclusion of a day of team building activities; once again the god of plot contrivances strikes. The approach of Glaber’s men quickly sobers everybody up as they take defensive positions.

As a group of rebels work to repel the first wave of Romans over the temple’s wall, another squad strikes at the flank of the main force. The battle goes so well that they capture the Praetor himself. But wait, it’s not Glaber that they grab but Varinius, who upon capture orders his men to lay down arms. Huzzahs all around. The rebels have captured a Praetor. Now they can outfit their ranks with proper military kit, right? Nope. Misdirection time.

Here’s the thing with this particular battle scene. The Romans might have been a bunch of puritanical, superstitious, sticks in the mud, but they were good engineers. So I thought to myself, “Why wouldn’t a Praetor of Rome deploy siege engines before sending in the infantry?” Varinius is an idiot, that’s why. As Spartacus and the rebels consider their victory, flaming catapult shot starts flying into their camp. Glaber, it would seem, is not as dim as his co-Praetor when it comes to matters of war.

When faced with Roman artillery, the rebels have no option but to retreat. Legionaries, mercenaries, and Ashur feat. hired goods pour in through the breached temple walls. While the remaining rebels evacuate through their escape tunnel, Oenomaus takes a knife in the eye as he and the other named characters attempt to hold the line. When the rebels emerge from the tunnel they find more legionaries advancing on them. Rather than fight, Spartacus orders a retreat up Vesuvius’ lone foot path.

The episode ends with Glaber taking possession of the temple and ordering his men to set up a picket at the base of the footpath. Rather than attack from the low-ground, he plans to starve the rebels out.

The misdirection here and there makes up for the embarrassingly obvious “Oh shit! How do we get this back on track?” moments that serve to move the plot forward. And while the scale of the battle seems off, Glaber brought 3000 men to Vesuvius according to the history books, the stakes finally feel appropriate. Too bad there’s only one more episode left. A drawn out battle of attrition could easily work over two episodes with a third after that to lay the foundation for where things are going to go next season.