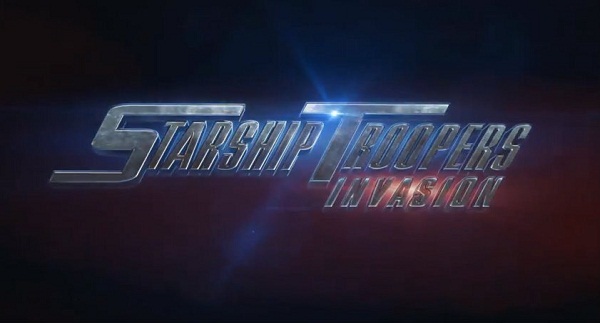 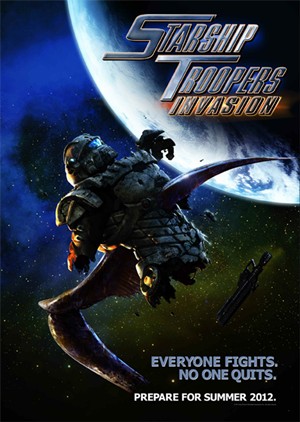 Today has shaped up to be a pretty big day in science fiction. The BBC announced that Jenna-Louise Coleman is replacing Karen Gillan and Arthur Darvill as the Doctor’s companion on Doctor Who. SyFy offered a carrot for fans of man-on-robot warfare with a trailer for their much talked about (web?) series Battlestar Galactica: Blood and Chrome. Oh and BioWare’s co-founder, Ray Muzyka, took to the internet to say that Mass Effect 3’s ending is getting retcon’d due to popular outrage. Is this a thing now? If I complain loud enough will the endings to other things get changed? Somebody dig up Heinlein, I want to talk to him about the ending of The Cat Who Walks Through Walls.

While we’re talking about the grand master, let’s take a minute to change the news cycle. In a day already filled with revelations, I happened upon a trailer for a new Starship Troopers movie. My thanks to friend and PoR reader Jay Helstrom for the tip.

Let’s all have a watch, shall we?

Compared to some other things that I’ve seen within the last twenty-four hours, that looked pretty good. The redesign of the starships makes them look like instruments meant to drop troopers from orbit with pinpoint accuracy. Whatever the grunt in the trailer was putting on, it didn’t look like canonical powered armour per se; perhaps it’s an update on the standard issue power suit from Roughnecks the animated Starship Troopers series. I even recognized the voice over as a modification of Heinlein’s own words.

I always get the shakes before a drop. I’ve had the injections, of course, and hypnotic preparation, and it stands to reason that I can’t really be afraid. The ship’s psychologist has checked my brain waves and asked me silly questions while I was asleep and he tells me that it isn’t fear, it isn’t anything important – it’s just like the trembling of an eager race horse in the starting gate.

I couldn’t say about that; I’ve never been a race horse. But the fact is: I’m scared silly, every time.

So perhaps this trooper is a bit more gung-ho than Juan Rico was before his assault on the Skinnies in the first chapter of the novel. The bottom line is that I look at this trailer and I’m reminded of the excitement that I felt fifteen years ago when I caught my first glimpse at Paul Verhoeven’s Starship Troopers. Sony Pictures and Stage 6 get to put one in the win column because I really want to see this movie.

Being the good trooper that I am, I always want to know more. This is what I found in the “about the film” section of the movie’s website.

A distant Federation outpost Fort Casey comes under attack by bugs. The team on the fast attack ship Alesia is assigned to help the Starship John A. Warden stationed in Fort Casey evacuate along with the survivors and bring military intelligence safely back to Earth. Carl Jenkins, now ministry of Paranormal Warfare, takes the starship on a clandestine mission before its rendezvous with the Alesia and goes missing in the nebula. Now, the battle-hardened troopers are charged with a rescue mission that may lead to a much more sinister consequence than they ever could have imagined….

It’s not the worst piece of copy that I’ve ever read, but it’s not the best either. Perhaps we could make the first sentence active so the bugs are attacking rather than the fort getting attacked. Should this copy suggest that Carl is the minister of paranormal warfare? Or is he just a member of said ministry? And why would the Terran Federation have ministers, anyway? That’s more of a parliamentary thing.

I know these aren’t huge details, so why am I making a big deal out of it? Because if a person walks into a room full of nerds and says the words “Starship Troopers”, they’ll meet with giggles, groans, outrage, and maybe the odd approving nod. The name and associated story lines, from Heinlein and others, have a bit of an image problem. At best, Starship Troopers is a campy big budget B-movie. At worst, it’s a screed from Heinlein that attempts to legitimize semi-fascist military juntas as effective governments. So when something comes along that looks like it might just transcend either of those narratives, the least the producers can do is offer up some copy that doesn’t look to have been written by a nervous intern.

So here’s how I would have done it.

When the bugs attack Fort Casey, an outpost on the fringe of the Federation, the fleet dispatches the fast attack starship Alesia and its battle hardened troopers to assist in the evacuation. As the Mobile Infantry fight a losing battle to hold the fort, Carl Jenkins, an operative with the Department of Paranormal Warfare, coordinates the evacuation of vital personnel and research aboard the base’s lone orbiting defender. The Alesia’s troopers expected an easy hot drop and bug out. That is until they arrived at Fort Casey and found Jenkins and his starship missing. Loyalties will be tested when the Federation orders the Alesia to hunt down one of its own.

Starship Troopers Invasion drops later this summer as a direct to DVD release. Shinji Aramaki of Appleseed and Appelseed: Ex Machina is directing. Edward Neumeier and Casper Van Dien are attached as executive producers. Neil Patrick Harris does not appear to be reprising his role as Carl Jenkins.