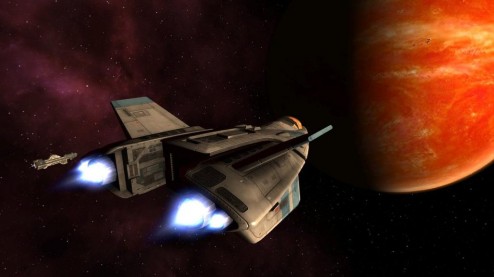 It’s been sixteen years since Wing Commander: Prophecy became the last entry in Chris Roberts’ award winning space opera/combat series. Two years later the sub-genre as a whole sang its swan song with Volition’s masterpiece Freespace 2. Since then space combat simulations have become something of a dying breed. Notwithstanding StarLancer, a product of Chris Roberts’ brother Erin, attempts to replicate the Wing Commander magic have been few, far between, and generally unimpressive. On March 22, 2012 all of that stands to change.

The game is called Wing Commander Saga, and if it lives up to the hype, it stands positioned to breathe fresh life into Wing Commander’s mythology and space combat as a whole. Oh, and before I forget, it is going to be completely and totally free. More on that in a moment though.

Development on Wing Commander Saga began in 2002. Since then the all volunteer production team has been working with the Freespace 2 engine to produce original art, music, sound effects, ships, and a brand new story set within the timeline of Wing Commander 3: Heart of the Tiger. Even a cursory look at the release trailer suggests that this team has not been labouring in vain.

WCS will feature two fully formed campaigns. The first, WCS: Prologue, introduces players to the story’s protagonist: a wet behind the ears Second Lieutenant named David “Sandman” Markham. Freshly drawn out of officer candidate school, Markham is sent to an aging carrier in an unimportant sector as his first deep space assignment. The main campaign, called The Darkest Hour, sees Markham transferred to the front lines. Once aboard the TCS Hermes, he participates in the final days of humanity’s valiant but faltering battle against the unstoppable Kilrathi war machine.

Tolwyn, one of the project’s co-founders, has been very clear in stating that The Darkest Hour does not subvert the events of Wing Commander 3. Working from canon established in the Wing Commander novels, a successful play through of The Darkest Hour will set the stage for Colonel Christopher Blair to lead his famous raid on Kilrah, thus saving humanity from extinction. Tolwyn has also spoken on WCS relationship with EA/Origin/Chris Robers vis-a-vis intellectual property.

We are not officially or unofficially sanctioned or endorsed by Chris Roberts, Origin, or EA. We are thankful to them for permitting us to make Saga- as manifested by them taking no action to shut us down but allowing us to develop it, just as they have done with other projects like Standoff and Privateer: Gemini Gold- but they have in no way, shape, or form sanctioned our project, nor have they done anything to make it official. They have not contacted us and we have not discussed it with them. Once again, we are thankful that they are permitting us to do this, but no endorsement of Saga by these entities should be implied from that fact.

Over nine hours of voice dialogue.

Approximately 70 cut scenes for a total of about 90 minutes of pre-rendered footage (not counting in-flight communications and command briefings).

Over 60 voice actors, some of whom are actual professionals.

With recent attempts at reinvigorating this particular gaming niche receiving luke-warm critical reactions, Sol Exodus I’m looking at you, it will be interesting to see what sort of reception WCS receives. The ten year wait comes to an end on March 22nd.