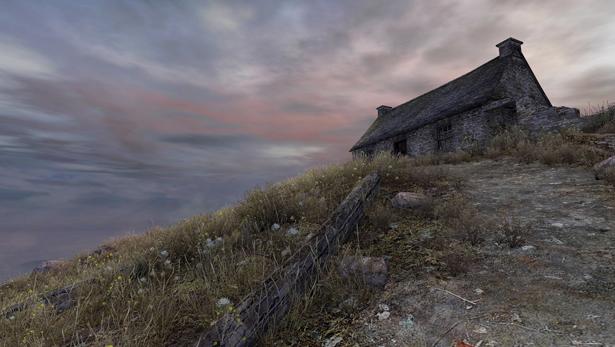 Summary Judgement: Think of it this way, you’re not paying for a “game”, but rather admission into an avant-garde art installation.

Developed by: The Chinese Room

*Caution* I don’t know that it is possible to spoil this “game” in the traditional sense. However, I will be talking about certain aspects of Dear Esther in detail. Then again, if you’re reading this it means you got past the part where I said “art installation”. So I’m willing to bet that you’re not the type of person for whom an ending is the most important part of the story.

Dear Esther began as mod to Half-Life 2 back in 2008. Working out of the University of Portsmouth, project lead Dan Pinchbeck produced the title as a means of exploring experimental game play and storytelling. Since then, the “game” has enjoyed several major graphics overhauls and the addition of a custom soundtrack. So, what the hell is it, and why do I keep putting danger quotes around the word “game”?

In my estimation, Dear Esther isn’t a game. Some reviewers have taken to calling it an alternative first person shooter, but there’s nothing “shooter” about it. Like life, Dear Esther is a first person walker. There’s no gun play, running, jumping, or action of any sort other than looking and walking. People engaging with this title do so through exploration, contemplation, and self-reflection. There’s no winning, losing, or dying, well except for the existential ending but that goes more toward the aforementioned introspection than anything else. I should also mention that, like life, Dear Esther is beautiful, sublime and a disquieting.

Other attempts to classify Dear Esther have put it in the realm of a mystery game. Once again, I beg to disagree. Yes, “players” engage with a mysterious story that is larger than the “game” itself. And yes, there are “clues” scattered about the island. There’s also a narrator that recites semi-randomized lines from a book. But a mystery implies a puzzle that can be solved through reason and deduction. In the tradition of games like Myst and Riven, mysteries generally offer a game play mechanic that brings everything together. Yet none of those elements can be found within Dear Esther. Understanding the chemical diagrams, circuit charts, and bible verses scattered throughout the island is a purely internal affair.

Which brings me back to my original point; Dear Esther is less a game and more an art installation. For me, the fundamental questions of this experience aren’t about level design, draw distance, or AI quality; they are about the intentions of the creator as well as my reaction to what is being presented before me. There’s a temptation to fixate on the story, as video games have become a medium for narrative transmission that have in some ways superseded television and film. Yet attempting to force a linear order on Dear Esther’s story is to ignore the “game’s” invitation to answer “why” rather than “what”. Once the line of inquiry moves in that particular direction, it’s hard for me to see Dear Esther as anything other than very experimental art.

So in the seventy-five minutes that it took me to walk through this installation, what did I take away from it? Sadness. Loss. Regret. The banality of broken car parts. Obsession with things that can’t be fixed. The empty comforts that the world offers us in the face of tragedy. I think, a lesson on aging. The agonizingly slow pace at which the character walks put me in the mindset of an old person who has grown tired of the world. Perhaps the whole thing is even a metaphor that probes the futility of attempting to tie together the vignettes of life into some sort of capital-M meaning.

Art, like most things, is often in the eye of the beholder. Maybe there is nothing more to this “game” than walking through a big open space for an hour and looking at some pretty scenery. Considering Dear Esther’s $10 price of admission, I don’t think anybody with half a brain could go wrong attempting to answer that question on their own.