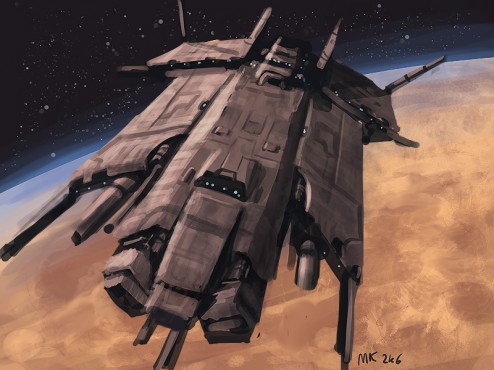 Image by: MK01 via DeviantArt

I had a hard time trying to classify James Bambury’s Estimated Time of Arrival. The story is funny, but it’s not a comedy. There are well crafted technical elements, but it’s not hard science fiction. Political motifs seem skillfully plucked from contemporary society, but the story’s anything but a manifesto. I suppose the best thing to do is simply reiterate what was said in the summary judgement; this is a fine example of frontier/colonial (not in the Foucaultian sense of the word) science fiction.

Estimated Time of Arrival is set on a planet called HD 156668, commonly known to its human colonists as Saskadelphia. The story begins when two colonists, Ori and Violet, notice an “alien” starship streaking into their atmosphere. When the vessel lands, it reveals two men from Earth, one of whom claims that he has bought Saskadelphia. At that point, the story begins having fun with some of the tropes of sub-light and FTL travel. Specifically, ETA plays with one of the oldest questions asked by hard-SF aficionados: what happens when the vast distances involved in space travel result in first expeditions being superseded by subsequent ones?

But rather than letting the pace get bogged down in relativistic real estate claims, Bambury keeps the focus on events as they unfold. In doing so, Mr. Smesh, the most recent clamant to  Saskadelphia, evokes memories of the Earth government in Kim Stanley Robinson’s Red Mars. As the hard working colonial commune talks about rights and principles, Smesh bandies about euphemisms that would see the colonists reduced to peonage. His foremost concern, much like that of the Earth’s, is stripping the colonial world for its mineral wealth, regardless of the current inhabitants’ claims to settler’s rights via government mandate.

Perhaps it is an inevitable comparison given the current state of affairs in the world, but I couldn’t help but see Smesh as a caricature of populist outrage against the hyper rich. It’s not simply that the character is rich enough to afford an entire planet; he’s also utterly dismissive of the “bumpkins” who live on Saskadelphia. When they form a mob in front of his self-constructing nanotech mansion, Smesh callously orders his lawyer/attaché/Smithers, Tehva, to spray them with a jet of nanites that would deconstruct the colonists into their base elements. There’s something wonderfully repulsive about a character who views people as “human resources” in the most literal sense of the phrase.

Yet even after reading the story a couple of times, and letting the ideas percolate in my head, I don’t know that I’m totally sold on the romantic thread that is woven through the plot. The narrative hints at an extremely complex relationship between Violet and Ori, beyond their most recent tryst that Ori’s narration uses to introduce the text. Although their banter seems quite honest and contributes to the comedy of the story, it doesn’t do much to enrich the overall experience until the very last paragraph. In that moment Ori’s actual audience  becomes clear, and the relationship therein takes on a redemptive tone.

I suppose I just wanted a better motivation for that redemption than what I could glean from Ori and Violet’s “John Crichton vs Aeryn Sun” sniping. It’s far from poorly done, but perhaps lacking sufficient gusto to justify, in my mind at least, what seemed like Violet’s impulsive decision to leave the colony in the story’s final act. If a little misdirection from her fellow colonists was too much for Violet, imagine how bad life will be on an Earth that is two thousand years removed from where she left it.

Overall, the story is a supremely enjoyable jaunt that blends comedy, politics, economics, individual liberties, and even a little romance, into a cohesive frontier narrative. I look forward to seeing what James Bambury comes up with next.