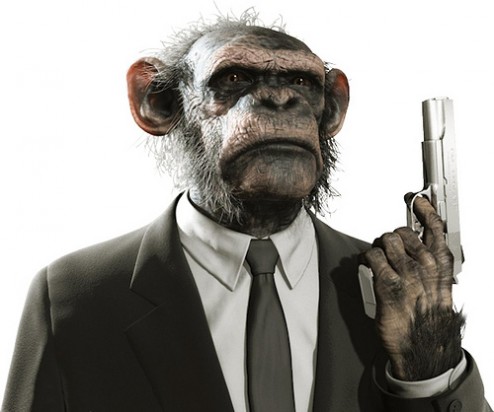 Last year I had a brilliant idea: I would write a review on each of the Aurora Award nominees in the short fiction category. Of course, I had this idea a full nine days before voting closed. Needless to say, tracking down copies of the nominated stories turned into a giant pain in the ass.

Many interns were fired.

That’s not a problem this year as all the authors in the short fiction category have included a copy of their work in the voter’s package. Thanks, writers.

Starting today, and every Friday for the next four weeks, I’m going down the list of short stories contending for Aurora glory. Derek Künksen’s To live and Die in Gibbontown just happened to be on the top of the pile.

To Live and Die in Gibbontown is a black comedy about a hit man named Reggie. Reggie, and his partner/sidekick Murray aren’t typical contract killers. In fact, at the start of the story, Reggie isn’t even really a gun for hire. When faced with deportation, Reggie goes into business for himself as a hit man who offers an international spy theme to palliative care. If you’re old and want to die with a little excitement, Reggie can take care of you. Reggie’s also an ape, more specifically a Macaque. And his ticket to staying in Gibbon country involves offing the mother of the Bonobo ambassador.

But it’s okay, euthanasia is legal in Gibbon country. Also, Alexandria Bonobo is a mean old racist who hates Macaques.

It’s a story about a trans-simian primate with genetic/cybernetic augmentations who circumvents immigration laws as a hit man for the elderly. Why wouldn’t it work?

Elements of the setting are familiar, Ford Broncos, international intrigue, hippie marketplaces, but viewed through this odd lens of primate society. The world, notwithstanding the fact that there are no humans, looks and sounds exactly like our own. Now I know what you’re thinking, because I was thinking about it too, this is the ending to Tim Burton’s god-awful Planet of the Apes remake. Perhaps Künksen did draw some inspiration from that piffle, but he’s elevated it far beyond anything Burton seemed capable of offering in that movie. How so? Well we could start with the fact that this story is a conversation on assisted suicide.

Perhaps telling a story about apes in a world that is so human that they might as well be human is a bit of a farce, but that small dash of absurdity is necessary to ease the reader into the essential details of the text. I’ll also concede that it treads very close to the “Heinlein Line” of “Rayguns in the suburbs”. However, force fields, gene hacking, and cybernetics combined with terrestrial non-human characters are necessary to create a buffer between the text and the contemporary issues orbiting assisted suicide.

Maybe if the story were simply asking and answering the Kevorkian question with a sombre and reflective affirmation of an individual’s right to choose their own end, it could get away with human characters. But creating a hit man whose motto is, “If you see it coming, you don’t pay.” turns the act of dying into an ultimately life affirming, and slightly fun, activity. I find that to be tremendously clever, and maybe even a healthy approach to death. Why go out with a whimper when you can, literally, go out with a bang? Isn’t it better than lying in a bed and pumping morphine into a person until they end up in a terminal coma?

Still, the issue remains controversial enough that there’s good reason to insulate the characters from potential reader outrage with a species change (even if most of us know that they are still human).

The most memorable part

When Reggie gives his business card to another character who wants to bring his aging mother-in-law to town for a “visit”. On one level, there’s the comedy in witnessing the unbridled joy that Reggie, as a small business owner, feels at making some face-to-face contacts. The fact that he’s going to have to kill somebody never enters the equation. On a deeper level, it speaks to the lack of agency that often accompanies a person’s end of life care. The message is clear, but it’s processed through a comedic filter.

In To Live and Die in Gibbontown Derek Künsken follows in the footsteps of George Orwell wherein he uses animals to ask a question about humans. Perhaps issues of end of life care are not as grand as the questions of political science that Orwell probed in Animal Farm. However, the developed world’s aging population should only accentuate the story’s direct, albeit comedic, approach to death becoming a cottage industry.

To Live and Die in Gibbontown was originally published in the October/November 2011 issue of Asimov’s. Check it out there, or join the CSFFA and get access to a voter’s package which contains this and many other great works of Canadian sci-fi/fantasy/horror.

Marie Bilodeau’s The Legend of Gluck is up next week. I’m told there are going to be decapitated heads.