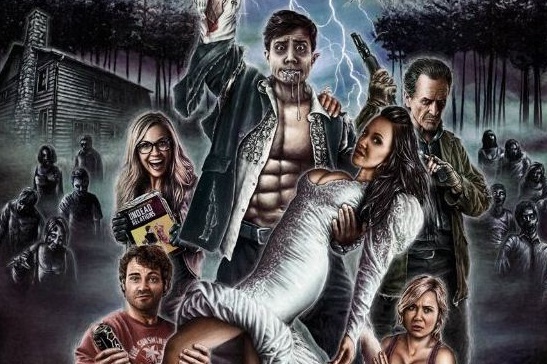 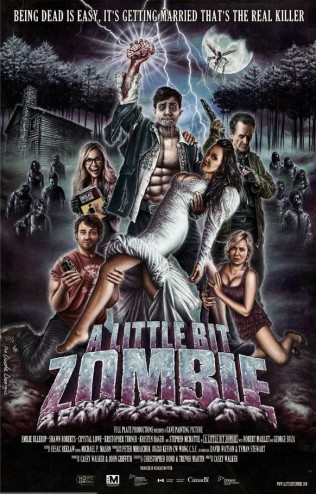 Summary Judgement: A unique twist on the conventions of zombification sees this movie deliver laughs a plenty, even if it does lean a little immature.

I didn’t know what to expect as I settled into the Toronto premiere of A Little Bit Zombie. I knew it was a zombie comedy, but not much more than that. Contemporary zombie comedies are tricky things as they inevitably invite comparisons, perhaps unfairly so, to the zombie masterpiece that is Shawn of the Dead. So let’s get the big question out of the way right now; is this Canada’s answer to Shawn of the Dead? No, I’ll explain why later in the review. However, it’s still a very funny movie. And as it happens, pure straight forward comedy is exactly what director Casey Walker admitted to as his goal during the post movie Q&A.

Like any zombie/horror movie worth its salt, A Little Bit Zombie involves young people and a cabin in the woods. Yet its opening scene subverts the “let’s go party” pretext that drives most horror movie slaughters with the promise of a team building/wedding planning weekend. This atypical setup is courtesy of the film’s protagonist, Steve (Kristopher Turner), a well meaning human resources manager. Steve has a bit of a problem. His overbearing passive-aggressive fiancée Tina (Crystal Lowe) doesn’t get along with Steve’s sister, Sarah (Kristen Hager), who just happens to be Tina’s Maid Matron of Honour. Nor does Tina score any points with Craig (Shawn Roberts), Steve’s brother-in-law and long time friend. As the group settles into the cabin, professional zombie hunters Max (Stephen McHattie) and Penelope (Emilie Ullerup) are blasting their way through a zombie outbreak at a nearby circus. Then comes the twist: a mosquito bites one of the walkers before flying away with the zombie pathogen. Cut scene to Steve getting bitten by a bug that won’t die, and there’s your premise for the story that follows.

Over the course of a night, Steve goes from boring beta male to partly undead. Sure, he hungers for brains, but he’s still a nice guy who feels really bad when he accidentally eats his fiancée’s pet rabbit.

For a brief moment, I thought that the invention of the human-zombie hybrid might open the door to some new dimension of zombie subtext. After all, there’s a well established history of zombies and zombification as a metaphor for larger social issues. Other than Penelope chastising Max for his love of zombie killing, and Steve’s reticence to kill as a means of sating his hunger, there’s not much in the way of a deeper story within this movie. A Little Bit Zombie is content to work on the same physical gag/dick and fart joke level as something akin to Kenny Versus Spenny or Billy Madison.

Yet there’s an unmistakeable charm that holds together this litany of fast paced pratfalls and punch lines. You see, I’m the first person to roll his eyes when somebody advises I turn off my brain and go with the flow. A case could be made for A Little Bit Zombie as perfect ‘turn off thy cognitive functions’ fodder. Yet, I never had to make the conscious decision to abandon half my IQ in viewing this movie. Strong acting, mile-a-minute jokes, and a self-aware lack of pretension in the story telling all came together as something that is subtlety disarming. By the time I stopped to think about a lack of a subtext, I was already forty minutes into the movie. By that point, the constant laughter and sudden onset of emotional investment in the characters had won me over.

There’s only one role within the story that didn’t work for me, Stephen McHattie’s Max. His scenes weren’t terrible, but his motivations were never really explained to my satisfaction. While his demands for canned “tactical bacon” were amusing, his temper tantrums and blind zombie hatred were a little unoriginal, especially when set against Tina and Sarah stipulating that they would find Steve a human happy meal, but that they would only let him eat a douche bag. Odd as it may be to say, the presence of a gung-ho zombie killer strained my suspension of disbelief as I watched Turner/Steve try to cope with the struggle between his zombie’s biology, his human brain, and a looming wedding.

At the start of this review I said that A Little Bit Zombie didn’t make the cut for me as Canada’s answer to Shawn of the Dead. Here’s why: where Shawn of the Dead embraced its essential Englishness, A Little Bit Zombie downplayed itself as Canadian. From ketchup bottles to licence plates, everything that could give a whiff of Canadian flavour is made generic. I understand the marketing/distribution value in creating an environment that could be anywhere in North America. Still, the effort that went into erasing the overt Canadian content was far too obvious.

These few criticisms aside, A Little Bit Zombie works quite well as a comedy meant to appeal to as broad a base as possible. It might not win awards for being the smartest movie out there, but it delivers on the director’s promise of being a Canadian production that is primarily concerned with entertaining rather than propagating a given political message.

A Little Bit Zombie opens in theatres on May 18th, 2012. I recommend going to see it instead of Battleship. PS: This is a red band trailer – you’ve been warned.