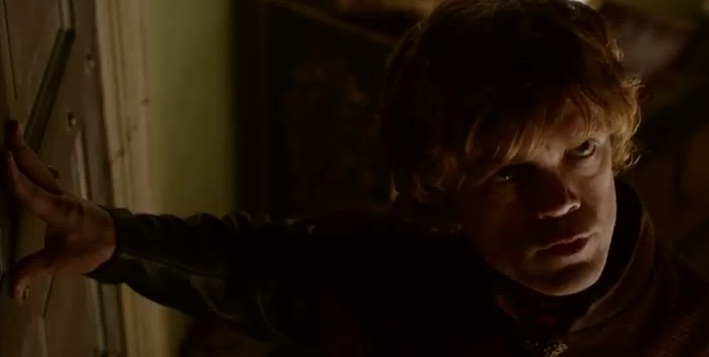 Summary Judgement: “The Night Lands” is a strong episode that spends most of its focus on Arya Stark and Tyrion Lannister, with an occasional jaunt to Theon Greyjoy’s old stomping grounds and a trip across the Narrow Sea.

““The Night Lands” begins north of the wall. There’s no real action between the men of the Night’s Watch and the looming wildling/white walker threat. Instead, the audience is treated to an anthropology lesson within Craster’s incestuous/polygamist village. Gilly, one of Craster’s pregnant daughter-wives, approaches Sam and Jon Snow with a request for protection and freedom from her father-husband. The girl hints at some sort of enigmatic fate if her child is born male. Though Sam is sympathetic to her request, Jon refuses to hear anything on the subject. The end of the episode sees Jon investigating a male baby abandoned in the woods only to be found by some sort of white giant monster thing.

Events in King’s Landing focus primarily on Tyrion with a brief appearance by Cersei and Little Finger. Upon returning to his room in the palace, Tyrion finds Shae and Lord Varys having an eerily pleasant conversation. The defacto Hand of the King confronts the spymaster, informing him that unlike Ned Stark he knows how the game is played. For those who don’t recall, Tywin Lannister, the actual Hand of the King and patriarch of the Lannister clan, forbade Tyrion from bringing his whore with him to King’s Landing. The situation is left at an impasse as Varys responds to Tyrion’s threat to have him thrown into the sea with a colourful sailing metaphor.

Exercising his power as Hand of the King, Tyrion then proceeds to fire the previous Lord Commander of the City Guard, much to Cersei’s outrage. In place of the man who betrayed Ned Stark, Tyrion appoints his sell-sword Bronn to the position. During her confrontation with Tyrion over Bronn’s promotion, Cersei reveals that it was not she who ordered the execution of all of King Robert’s bastards, but Joffrey. Cersei and Tyrion also trade a few insults on how the latter’s life was not worth the death of their mother.

Little Finger’s role in this episode is so small as to almost escape notice. Having witnessed the death of a baby at the hands of Joffrey’s thugs, one of his courtesans won’t stop crying (I think it was Ros from up north, but it’s been so long who can remember these passing details). So Lord Baelish tells Ros(?) a story about how his women are “investments” subject to any imaginable depravity of a paying customer. It’s possibly the most creepy straighten up and fly right speech ever.

On the Kingsroad, two riders from the Kingsguard catch up with the convoy containing Arya Stark and Gendry Baratheon. Arya dives into a ditch, fearful that the men are after her. In doing so she tips her hand to Gendry. Later in the episode Arya reveals to Robert’s bastard that she is in fact Arya Stark. Gendry almost blushes when it occurs to him that he’d pissed in front of a high born lady.

Elsewhere, Theon Greyjoy returns home to the Iron Islands in search of his father’s support for Robb Stark’s war against the Lannisters. After accidentally getting to third base with his sister en route to the castle, Theon gets the verbal equivalent of a bitch slap from his father who sees his son as nothing more than a Stark dandy. Lord Balon then burns Robb’s request for an alliance. Balon then calls upon Yara, Theon’s sister, as the leader of the Iron Island’s military forces; a force that would not be directed against the Lannisters.

Across the Narrow Sea, Daenerys, her dragons, and her followers are still lost in the Red Waste. Hopes are dashed as one of her reconnaissance riders returns headless. Then one of the Dothraki women sounds off about souls and mysticism.

Meanwhile “King” Stannis Baratheon has taken to recruiting pirates into his army via Davos Seaworth. Stannis spends much of his screen time lamenting the fact that his younger brother Renly has filched 100,000 men who would otherwise be under his command. Meanwhile that red haired woman (Her name is Melisandre but I don’t think anybody has actually said it in the show) suggests that Stannis shag her rotten on a giant Settlers of Westeros board give himself over “fully” to the new one true god.

Though I’ve never read the Song of Fire and Ice novels, I’ve heard that George R. R. Martin loves adding new characters to the story. This is problematic for a television adaptation. Unlike Heroes, Game of Thrones seems to have a good handle on its sprawling cast. Rather than giving everybody five minutes, the series is being efficient in focusing on the relevant stories. Because, really, do we need to see Caitlin Stark for two minutes while she rides to Renly Baratheon’s fortress? Do we need more of Bran as an underage bureaucrat? I think not.

Let’s talk Lannisters for a moment. There’s little room for doubt that Peter Dinklage and Lena Headey have earned their top billing in the series. Consider that Tyrion Lannister’s exchange with Varys was more important than it seemed. To my recollection, this was the first time that the imp has ever been truly out manoeuvred by another character. Similarly, Queen-Regent Cersei has proven herself adept at being out flanked by the actions of her sadist son: first in his execution of Ned Stark and more recently with his hunt for Baratheon bastards. Yet where outrage and counter plots could well be expected, both characters have leaned more toward vulnerability. Headey and Dinklage seem to have taken that one step farther in conveying, dare I say, a degree frailty through their acting. That said, were I in Westeros, I would not so much as breathe in the wrong direction of Cersei Lannister.

Also on the subject of Lannisters, as Cersei and Jamie have made incest a bit of a moot point within the series, I won’t bother waxing poetic on Theon Greyjoy’s advances toward his sister. Well maybe just one thing: nine years might be a long time, but it’s not that long of a time when the object of affection is a sibling. On a positive note, Alfie Allen has always done a marvelous job in playing Theon as an upstart who regularly forgets his place within the world. Watching Patrick Malahide as Balon Greyjoy ruthlessly emasculate his son was a welcome piece of hubristic comeuppance.

My only complaint rests within Daenerys Targaryen’s plot point. It is the exception to the general rule that Game of Thrones is good with efficiency in storytelling. Rather than witnessing a fit of histrionics that did nothing to get the would-be Khalessi out of the Red Waste, I would have preferred to see an extra two minutes spent clarifying the relationship between the Greyjoys and the Starks. Maybe that got explained last season, but it’s been a while and I shouldn’t have to look these things up on a Game of Thrones’ Wikipedia page. Say nothing for the troublesome fact that the series is playing with issues orbiting the Dothraki and race with all the aplomb of Edgar Rice Burroughs and his treatment of the Green Martians vs the Reds.

Bottom line: It’s a mostly good episode with some very strong acting from the principle cast. There’s not a lot of plot movement, but this early on in the season it is still a game of catch-up more than anything else.