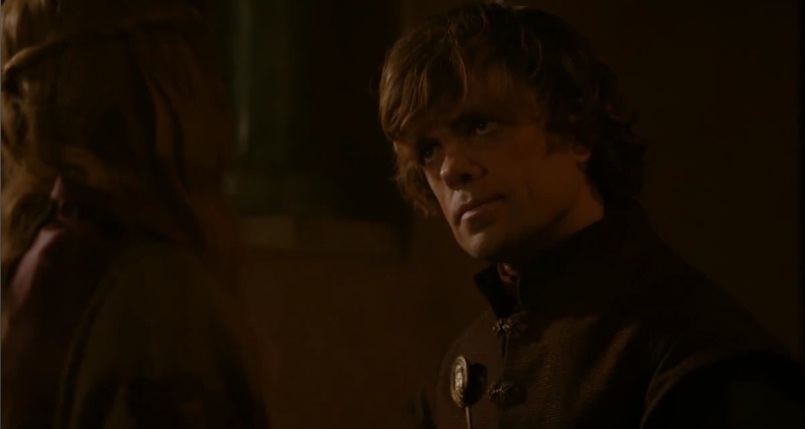 Game of Thrones’ third episode, “What Was Dead Can Never Die” does two things. First, it reminds the audience that women are power players in the Seven Kingdoms. Second, it dares us to ask who is playing whom within Westeros’ various intrigues.

As foreshadowed last week, Craster ejects the men of the Night’s Watch from his camp. Lord Commander Mormont’s responds to John Snow’s indiscretion as a lesson in the hard nature of life north of the wall. As the men pack up their camp, Sam all but professes his love to Gilly as he gives her his mother’s thimble. I couldn’t help but smile at the naive innocence of the gesture. Yet we shouldn’t forget that this isn’t the sort series where good things happen to nice people.

The episode’s quick stop in Winterfell reaffirmed through denial that which we already know via Daenerys Targaryen’s dragons: magic is returning to the world. No longer a subject for speculation, Bran Stark’s “dreams” are contextualized as a manifestation of some supernatural relationship between him and his dire wolf. Maester Luwin, an accomplished scholar of the arcane and occult, reminds Bran that while there used to be magic in the world, it has long since vanished.

Is it the truth, or does the Maester have an agenda? Perhaps he wants to protect Bran from the power that magic can offer. Imagine for a moment the righteous fury of a crippled wizard whose energy is fueled by frustration and resentment.

Theon Greyjoy wastes no time confronting his sister over their grope fest from the previous episode. Yara responds to his conniption by stating that she wanted to see what sort of man he was. Before Theon has a chance to respond to yet another emasculating comment from his family, their father announces plans to attack the north while the Starks and Lannisters fight in the Riverlands. Yara is given command of 30 ships and the most important targets of the campaign, including Winterfell. Theon is relegated to command of one ship intended to harass fishing villages. In working through this power triad, the episode offers a bit more clarification on the relationship between Theon and Balon Greyjoy. I still think that exposition would have been more useful last week, but at least it happened.

The prodigal Greyjoy then finds himself choosing between his family of blood and his family of circumstance. We’re led to believe that Theon is siding with his father. First he burns a letter he wrote warning Robb Stark about Balon’s plans to attack the north. Then, he bends a knee to his father before a salt water baptism into the faith of the Iron Islands’ patron deity “The Drowned God”. So is this a story about Theon wanting some approval from daddy at any cost? Or is it a set-up for a double cross that will prove Theon’s loyalty to the Starks?

Catelyn Stark arrives in the court of Renly Baratheon on the heels of a tournament. The final round of this battle sees Brienne of Tarth, a seven foot tall female warrior, triumphant over Loras Tyrell, brother to Margaery Tyrell, who is the new wife of “King” Renly Baratheon. As a reward for her victory, Brienne is named to Renly’s Kingsguard.

Renly then welcomes Catelyn into his court as an emissary of “King” Robb Stark, despite his brother-in-law’s objections. Renly offers Catelyn quarters before going to pray. Prayer, as it happens, is code for gay sex with Loras. That’s right folks, more incest! At least this is only the political sort. Still, my mind was filled with flashbacks to The Tudors as I imagined a season long plot arc that saw Natalie Dormer reprising the role of an ignored queen.

Instead, Margaery admits to Renly that she knows about his orientation. She further suggests calling Loris in to the bedroom when their attempt to consummate the marriage fails. “You are a king,” she repeats to Renly. Rather than act as a victim of gender politics a la Cersei Lannister, Margaery is actively working with Renly to retain her new found station. Kudos to the writers for taking this character in a genuinely unexpected direction.

While the Watch recruits sleep, Yoren and Arya talk about how death haunts a person through obsession. Arya’s comments on seeing Cersei, Joffrey, and Sansa presiding over her father’s execution evoke a genuine feeling of PTSD from young Maisie Williams. Then the sound of horns and riders, in the form of last week’s promised Lannister reinforcements, shatters the tranquility of the scene.

In the battle that ensues, Yoren as well as a number of Night’s Watch recruits die trying to repel the Lannister guards. Arya and Gendry both survive the ordeal only to be captured. Gendry himself seems ready to confess his identify rather than watch the remaining captives be put to the sword. But it’s Arya who speaks first. She points to one of the dead, who just happens to be in close proximity to Gendry’s bull head helm, naming him as Gendry. At least Arya’s alive, but now the only person who knows she’s the daughter of Ned Stark is the bastard son of Robert Baratheon. Not exactly an actionable position when one is under the watch of Joffrey’s goons.

Once again, Peter Dinklage and Lena Headey manage to make the Lannisters look as well adjusted as the Kardashians. To ensure he survives his tenure as Hand of the King, Tyrion seeks to test the loyalty of the Small Council. Tyrion constructs three scenarios that involve marrying off Myrcella Baratheon, Cersei’s only daughter, to a different noble house. He tells one story to Pycelle, another to Little Finger, and a third to Varys, swearing all three to secrecy. It’s a scene of deliciously cold served revenge when Cersei confronts Tyrion with the story he told to Pycelle: that Myrcella would be sent to Dorn, just as she was sent to Robert Baratheon. In using his own niece against his sister, Tyrion finally gets to punish Cersei for all the injustices she has heaped upon him.

With Pycelle in a black cell, Varys and Tyrion share a drink. It’s a cordial moment, but not one that should be mistaken for trust. Despite the fact that Varys pulled strings to see Shae assigned to Sansa Stark as a handmaiden, rather than working in the kitchens as Tyrion initially planned, the eunuch still holds that particular leverage over Tyrion. Even if Varys has no ambitions of his own, Tyrion’s lover makes for an impressive insurance policy should the Hand decide to swat the Spider.

There’s nothing I love more than intrigue. However, I have it on good authority that people also like action. This is the second episode in a row that’s extensively talked about Robb Stark’s war but shown nothing it. If next week’s focus remains on politics, then Game of Thrones is going to start treading into Battlestar Galactica (the good one) territory. I don’t have a problem with that, and I suppose HBO doesn’t either since the series has already been picked up for a third season. Yet the fact remains, if you want to have a show about war, then from time to time you need to depict that war in concrete terms.