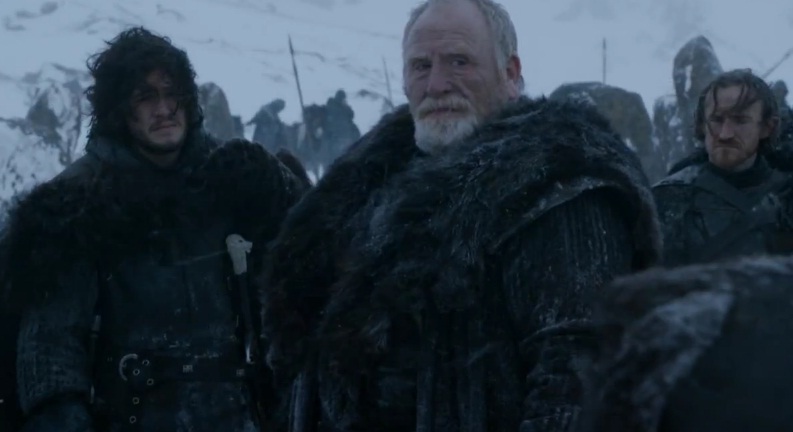 Damn it all to hell. I had so hoped to start this review with, “Wow, that was the greatest smoke monster killing frenzy I have ever seen.” Ah well, we can’t always get what we want. The short, fast, and dirty of “The Ghost of Harrenhal” is that the only plots worth caring about are happening in the South of Westeros. The farther North and East the story is set, the more obvious it is that the writers are working overtime to keep the audience’s interest.

The episode begins with Catelyn Stark negotiating a deal with Renly Baratheon. Renly’s content to let Robb be king of the North, so long as Robb swears fealty to Renly in the same way that Ned Stark swore his loyalty to Robert Baratheon. It’s probably the best deal either party could hope for, so of course it’s all going to go terribly wrong. Melisandre’s smoke baby apparates into Renly’s tent and stabs the man who would be king through the chest. Renly dies. Brienne screams, then cries, then kills a couple of guards who thought she killed Renly. Fearing that they will both be hung for treason, Catelyn convinces Brienne that she must flee in lieu of seeking revenge.

Dawn sees Stannis Baratheon’s fleet closing on Renly’s encampment. Little Finger bursts in on Margaery and Loras Tyrell holding vigil over Renly’s dead body. Margaery orders her brother to saddle their horses so that they, as well as the Tyrell banner men, can flee. We are, however, left with the implication that we haven’t seen the last of Margaery Tyrell. When Little Finger asks if she wants to be a queen, Margaery answers, “No, I want to be the Queen.”

Aboard Stannis’ flagship, Davos Seaworth attempts to confront his king about Melisandre’s smoke baby. Stannis, dour as ever, is hearing nothing of it. Citing the courage to give bad news as a key part of loyalty, Seaworth admits to Stannis that the men fear Melisandre will take King’s Landing from Stannis as easily as he took Renly Baratheon’s men. Reluctantly, Stannis agrees to leave Melisandre behind when they push on King’s Landing. Stannis also assigns Seaworth to command the invasion of the aforementioned city. I coudn’t quite tell if Stannis made the decision in the same way that Tywin Lannister assigned Tyrion to the front lines of his first battle against Robb Stark; the expectation being that he would die. Seaworth has been nothing but loyal, but he also knows that Melisandre is a magic user. If Stannis wins the Iron Throne, Seaworth, who knows that Stannis’ power base rests in sorcery, might prove a liability.

Elsewhere, between the Riverlands and the Strormlands, Catelyn and Brienne try to decide their next step. Brienne wants revenge, but Catelyn advises her against an inevitably suicidal effort. Instead, Brienne offers herself to Catelyn as bodyguard in exchange for a promise that when the time comes, Brienne will get to kill Stannis. It’s actually a rather touching scene to see two of the strongest characters, one literally the other spiritually, exchanging fealty with each other. In that moment the audience can truly understand why the Starks are so beloved by their people.

Having heard of Renly’s death, Cersei Lannister is positively dripping with hubris. Despite the fact that the Lannisters are now outnumbered on land and sea by Stannis Baratheon’s forces, Cersei is confident in King Joffrey’s plans to deal with a siege of King’s Landing.

Yeah, I said King Joffrey’s plan. And as Bronn points out with his usual aplomb, the plan is bat shit crazy.

After pressing his cousin for information, Tyrion finds out that some combination of the Cersei/Joffrey brain trust has ordered the creation of something called Wild Fire aka Westeros’ version of Greek fire/napalm. And there’s something on the order of 9000 kegs of the stuff inside the walls of King’s Landing. So maybe the Lannisters will repel the invasion, or maybe, as Bronn suggested, they will burn the city around themselves trying to lob exploding Wild Fire projectiles from catapults.

Theon Greyjoy is back. In his one scene, he introduces himself to the crew of his ship, the Sea Bitch, like a preening fop. Low and behold, the crew don’t care about him. His first mate reminds him that they are iron islanders and thus accustomed to doing what they like. Translation: perhaps Theon should sack-up and do what he likes as well.

So instead of going to raid fishing villages, Theon decides/is manipulated into attacking a village near Winterfell. Though it’s never said, the implication is that once Bran Stark sends men to aid the village, Theon and his one ship will go besiege Wintefell itself.

I call shenanigans on that.

One sailboat with a crew of 150 men (just guessing based on the size of the ship – also if they don’t have cannon why would they square rig a ship?) can not possibly besiege, let alone capture, a castle. What are they going to do, throw rocks and foul language at Winterfell’s walls?

Bran continues to hold court as Lord of Winterfell. After dealing with pasture problems, word reaches him of the attack on the aforementioned village. Playing into Theon’s “plan” he dispatches 250 men to deal with the incursion. So now Winterfell is vulnerable, I guess. Things make even less sense after Bran talks to the wildling “slave” woman about a dream where the sea floods Winterfell keep. Okay, Bran has a bit of prescience happening if we view the sea as a metaphor for the imminent Greyjoy attack, that’s cool. But then the wildling “slave” confirms what we know from the show’s opening credits, Winterfell is a walled city in the interior of Westeros.

Maybe I’m missing something from not having read the books, but I don’t see what threat one ship full of surly pirates is against a land locked city. Perhaps Theon has some sort of semaphore system that he can use to signal his sister with her 30 ships…so they can all walk inland together?

Does anybody remember why the men of the Night’s Watch went North of the Wall? I had a serious “oh yeah, that’s why” moment when the Watchmen reminded us that there’s some wilding king who has rallied all the other wildings behind him. Atop some mountain that was settled by the first people who lived in Westeros (narrative infodump warning) the Lord Commander and his rangers decide they need to send a small team of men to kill the wildling king rather than engaging him in pitched battle. So off Jon Snow goes with the rangers to do just that, I think.

Here’s the problem with this plot thread. It seems like the writers are desperate to come up with something for Jon Snow to do. Again, I haven’t read the books, so maybe the powers that be are doing exactly what they should be doing. However, it seems to me that they haven’t locked on to a motivation for Jon Snow that translates from text to television. Last season I knew why the Night’s Watch was important. This season they have spent so much time diddling around with Craster, Sam, Gilly, and dead babies that even though the white walkers are upon them and wildling kings are raising an armies, neither of the two seem very menacing. The entire expedition has the tone of camping trip, rather than an incursion into hostile territory.

So how about this, let’s kill Sam next week. Nothing would raise the stakes better than killing the nicest person on the show.

See Daenerys. See Daenerys go to parties. Party, Daenerys, party. Once again, Daenerys spends the episode alternating between confusion and outrage. First, she learns that Robert Baratheon is dead. Then Xaro Xhoan Daxos, the black guy who let her into Qarth, reveals that he is filthy stinking rich and wants Daenerys to marry him. In exchange he will outfit her with men, horses, and ships to mount a campaign against the Seven Kingdoms. Jorah Mormont convinces Daenerys that the men she needs to reclaim the Iron Throne are in Westeros, not Essos. Mormont then adds that she will need only one ship, a ship to carry her home.

So the plan is that Daenerys is going to walk into Westeros, announce to everybody that she has some baby dragons, and then those same people will forget about her father’s insane rule and rally behind her?

I don’t care if it’s a divergence from the novels, but it’s time to either do something very interesting with Daenerys Targaryen or kill her so we can focus on more interesting characters.

The eponymous ghost of Harrenhal turns out to be one of the men that Arya freed from the prison cart. After some talk about the Red God, he offers Arya three lives in exchange for the three that she spared. Arya first asks for the life of the man who was torturing the prisoners. The Ghost delivers it to her at the end of the episode.

The big question is this: will Arya ask for the life of Tywin Lannister. On the one hand he’s the man who saved her, Gendry, and the other prisoners from certain painful death. He’s also the man waging a losing war against her brother and is, indirectly, responsible for the death of her father. Arya statement to him that “any man can be killed” could certainly be construed as an adequate foreshadow of events to come. But Arya’s not stupid, there’s no real point in killing her benefactor without an exit strategy.

And that, as they say, is that. Five episodes down, five to go.