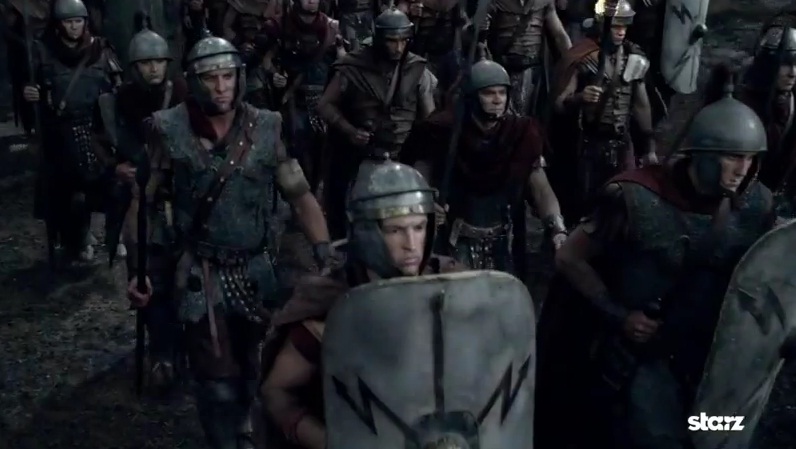 As prophesied, the final episode of Spartacus: Vengeance sees a whole bunch of main characters get killed. Did their deaths serve a purpose? Maybe, a little.

Was there action? Yes. Was there blood? Oh yes, by the bucket full. Did people get what they deserved? Some. How do I feel about it? Meh.

I’m going to write a wrap-up piece on the series next week, so I’ll save much of my criticism for that. For now, I’ll say that the route that Steven S. DeKnight, took to get Spartacus from A to B is not the path I would have walked. Yay, arm chair screen writing/directing; isn’t the internet a great place?

The episode opens atop Vesuvius. As expected, things are pretty rough. Mira explains to Spartacus, before getting in a little dig about his “next woman”, that the group is running low on food. Before Spartacus can respond to Mira’s barb, Crixus alerts Spartacus to the fact that some of the Germans are trying to breach the Roman position at the foot of the mountain.

This unauthorized sortie would have worked had Ashur and the Egyptian not conveniently arrived at the picket line to lend a hand. Before Ashur can cleave German skull asunder, Mira, Spartacus, Crixus and Gannicus show up to save the day. And then Mira gets an axe in the chest.

Also, remember last week when I said that for want of a relationship with Spartacus, Mira had no point in the story?

Normally I love being right, but Mira’s death is just too pointless for me to feel good about it. It reminded me of when Wash died in Serenity. The powers that be killed somebody just to show the audience that no primary is safe. Oh wait, this is Spartacus, we already knew that; we learned that lesson when Varro died. So now Katrina Law, who I’ve found to be a rather good actress within the series, is gone for season four. Boo!

Cut scene to Lucretia and Ilithyia in a cart together. Having reconciled with Glaber, Ilithyia is eager for her child to be born in Rome. She takes to the road so that she might convince Glaber to press his men up the mountain, rather than letting starvation do his job for him. Ilithyia also expects that Lucretia will be returning to Rome with the couple. Inevitably, Lucretia reveals Glaber’s plans for her vis-a-vis becoming Ashur’s bride. She also hints at a plan of her own to get out of it. Ilithyia, who now seems to have well and truly forgiven Lucretia for everything that happened in Season 1, reassures her friend that all will be put right.

With Shakespearian delicacy, Ilithyia pours a little poison into Glaber’s ear. First, she convinces Glaber to assault the mountain sooner rather than later. Then, she re-writes the story of how Seppia came to learn of her brother’s fate. With the now infamous snake bracelet in her hand, Ilithyia casts Ashur as the agent provocateur behind Seppia’s aborted assassination. Glaber, perhaps too easily, buys into the idea that Ashur is nothing more than a Syrian viper. And since murder is always more fun in pairs, Glaber informs Ilithyia that Lucretia has served her purpose as prophetess. The oddest of couples are loose ends that need tying up.

It seems odd to write Ashur’s name in close proximity to the word innocence, but such was the case. Glaber, however, refused entertain the Syrian’s pleas of loyalty. Instead, the Praetor sent Ashur up Vesuvius with an offer of clemency for the rebels if Spartacus would surrender his life. After giving a speech, Spartacus sends Ashur on his way. Yet Crixus has other plans. The Gaul would send Ashur’s head to Glaber as answer to his offer. Ashur cites his wounded arm as grounds for unfair completion between Crixus and himself. So Naevia steps up to settle accounts with the Syrian.

Oh don’t look so surprised; we all knew that Ashur had to die. Once he crossed the line in to being Mr. Rapey McRaperson, his days were numbered. However, his Iago-esque final lines were, for want of a better word, spectacular.

““Killing me won’t erase the feeling of my cock inside her, or all those that followed.”

One last chew at the scenery for a once great villain.

Still, Mira dies and Naevia lives? It hardly seems fair if you ask me. Mira evoked Artemis: a strong warrior and voice of proto-feminist reform. Naevia is as blood thirsty as Ares. I’ll take the earlier one for the win any day. I suppose the writers will have an easier time with brooding Spartacus than having to dive headlong back into the scummy waters of howling mad/sad Crixus.

After a chat with Gannicus, Spartacus devises a plan. He’d been using the vines that grow on the rock face of Vesuvius to shroud Mira’s body. Perhaps they could be used for other purposes? Purposes that involve rappelling down the side of the mountain.

Meanwhile Lucretia and Ilithyia are back at the ludus in Capua. Lucretia, thinking herself free of Ashur, tosses the red wig over the villa’s balcony to the cliff below. Joined by Ilithyia, the two women go on about how both shall soon be free of this, that, and the other thing.

With Lucretia’s back turned, Ilithyia moves closer to the woman who earlier in the episode was a “cherished friend”. Despite her mixed feelings, the Praetor’s wife is intent upon uniting Lucretia with the gods. At the last possible second Lucretia turns to see her “friend” with hands raised in murderous intent. Pause for dramatic effect; then camera pan down to reveal Ilithyia’s water has broken.

Seriously? Considering the amount of water on the floor, I expect Ilithyia would have noticed something amiss a little sooner. Then again, I’ve never witnessed that particular biological function. Anybody care to educate me on this point? Anyway, murder is set aside as Lucretia takes Ilithyia inside to deliver.

Back at Vesuvius, Spartacus, Agron, Crixus, and Gannicus use vine ropes and cover of night to get behind the Romans’ line. After slitting a few throats, they make for the siege engines. The bombardment that follows lays waste to the Roman encampment. Furious, Glaber orders a charge on the rear flank. Just before the first rank of Romans cross steel with the small commando squad, Oenomaus and Nassir lead the rest of the rebel contingent down the mountain. The desperate assault catches the advancing Romans completely out of position. Guts and gore ensue. Oh and I hope nobody particularly cared about Oenomaus because he gets a sword through the stomach while fighting the Egyptian. With his final breath Oenomaus tells Gannicus that he’s off to be reunited with his wife.

I don’t want to say I saw it coming, but Oenomaus hadn’t been getting a lot of screen time. Notwithstanding the second and fifth episodes, I don’t really think the writers knew what to do with him.

Having lost the imitative in battle, Glaber orders a retreat to the temple. Spartacus, covered in blood and full of fury, commands his men to press their advantage.

Now things start to get a bit stupid.

We return to the villa to see Lucretia playing midwife to Ilithyia. She returns from getting some “herbs to soothe pain” covered in blood. It seems that Lucretia went on a killing spree while she was gone, a spree that extends to the slave attending Ilithyia’s bedside.

I’m sorry, but the time for Lucretia to go crazy was way earlier in the series. She’s been too normal for too long for this reversal of character to have any meaning. Any thoughts that I had toward Lucretia playing the long con died when the arena burned down. Now, without any regard for the integrity of the character or the intelligence of the audience, Lucretia decides to go bat shit crazy. Cut scene and Lucretia is outside on the sands of the ludus. With the newborn babe wrapped in her dress, she’s walking toward the cliff at the far side of the training area. At the same time, Ilithyia is crawling toward Lucretia, leaving a trail of blood behind her as she moves.

For the briefest of moments I thought Lucretia would claim the baby as hers. A legal heir to Quintus Batiatus would allow Lucretia to act as steward of the boy’s inheritance until he came of age. Such was not the case. Lucretia, one of the best characters in the show, mutters something in her crazy voice about “Quintus always wanting a son” before throwing herself and the baby off the cliff.

Bullshit. Total bullshit. Remind me again why I’m going to watch this show without Lucy Lawless or John Hannah?

Things wrap up at Vesuvius about as I expected. Romans die. Spartacus has a sword fight with Glaber. Glaber warns Spartacus that he hasn’t won anything; Rome will send legions to hunt him down. And Spartacus puts his sword down Glaber’s throat.

The season ends with Spartacus telling Crixus that it is time to build an army. Then there’s one last quick speech about freedom.

At least now that they’ve killed Lucretia, Seppia, Seppius, and Glaber, there’s no reason for the series to be tethered to Capua. Next season SHOULD see a shift toward Rome, Crassus, and the glory stealer himself, Pompey. Still, I can’t help but thinking that this was the season of unrealized potential. I kept waiting for things to happen, but they never quite materialized in the way I expected. I’ll speak more on this next week when I do my season wrap-up post.

For now, I want to thank everybody for coming back week after week to read my recap/reviews. Starting next week, Monday shifts from Spartacus to Game of Thrones on the Page of Reviews.