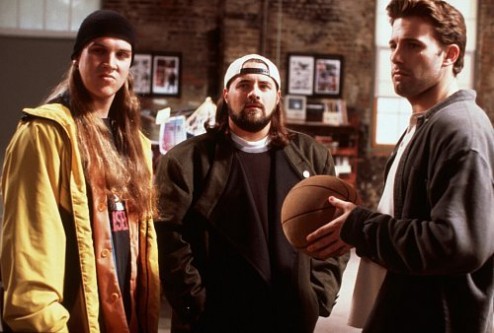 Though a glorious experience, I came home from Ad Astra 2012 exhausted in every sense of the word. After summoning the strength to do the bare minimum of unpacking, I collapsed on the couch in search of the dumbest thing on television. There upon I came across Jay and Silent Bob Strike Back.

““Perfect,” I said to myself. “I thought this movie was stupid when I saw it in theatres eleven years ago, so it’s sure to be a brainless affair now.”

I mean really, who expects to have to turn on their cognitive functions when a movie starts like this…

So why did twenty-year-old Adam think it was stupid? Well, let’s start with I was twenty.

My initial screening only revealed the story’s first meta layer. Therefore, I saw Jay and Silent Bob Strike Back as incredibly self-referential to Kevin Smith’s corpus of work up to that point. I think I might have bandied about words like “shameless vanity project” in discussing the movie with my other twenty-year-old friends. And since my friends and I were completely indoctrinated into the mythology of Hollywood “art”, it never occurred to us to look at Jay and Silent Bob as a commentary on the business of movie making. I mean, why would we? Who would ever dream of putting something as pedestrian as box office returns above the purity of telling a story, right? Oh 2001 Adam, how innocent you were.

Then, out of my near comatose post-con state, another idea dawned upon me; I didn’t watch Kevin Smith’s movies in the right order. Chasing Amy was my first exposure to Kevin Smith. Despite the fact it too was wrapped in dick and fart jokes, Chasing Amy was the first movie that made fifteen/sixteen-year-old Adam start to  think seriously about the fact that there were other people out there who did things differently than I did (Yeah yeah, you try growing up in St. Catharines, Ontario and see how worldly it makes you).

Two years later I was in a theatre watching Dogma, which I saw as a legitimizing force for a case “Obnoxiously Vocal Juvenile Atheism” that emerged sometime around my seventeenth birthday. Despite this lack of social graces, I began to understand Kevin Smith as a director who used comedy to make social commentary. Chasing Amy attempted to contextualize and perhaps even normalize homosexuality for a teenage audience. Dogma, for all its slandering of Catholicism, wanted people to believe in ideas rather than ideologies. Jay and Silent Bob used Hollywood to subvert Hollywood as embodied by Miramax. But at age twenty, I wasn’t quite plugged in enough to film culture to pick up on that message. Thus I assumed there was no message other than one that served to gratify Kevin Smith’s ego whereby I wrote off the entire picture until this past Sunday night.

So if you, gentle reader, watched Jay and Silent Bob in your younger years and found it wanting, but now you can’t stop talking about how much you love Community, Harold and Kumar, or Tropic Thunder, then it might be time to revisit Jay and Silent Bob Strike Back.