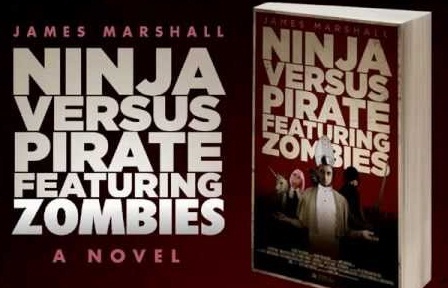 Summary Judgement: The novel’s satire runs so perfectly parallel to the zeitgeist of contemporary culture that it’s either the most flippant and offensive thing I’ve ever read, or the most concise allegory on post-industrial culture to ever to be constructed.

Where the hell does a book reviewer start when the protagonist of the novel in question is a teenage trillionaire who is also the founder of the world’s most popular religion as well as the self-appointed saviour of humanity? Did I mention that Guy Boy Man, the eponymous pirate of Ninja Versus Pirate Featuring Zombies wants to save humanity by destroying it?

NVPFZ is set in a world, very much like this world, quite possibly this world, where zombies control everything. Upon realizing that life is a prison meant to entertain human teenagers until such time as they can become infected with “The Strain” and turn into zombies, Guy Boy Man kills his parents. It’s okay, they were zombies, probably. He then meets a centaur named Centaur111 who gifts him with all the money in the world on the condition he can never tell a girl that he loves her. Therein, Guy Boy Man, demagogue, messiah, and teenager begins his quest to save humanity by purging his school of all zombie influences.

Eradicating Scare City High School of its zombie control means that Guy Boy Man has to confront the unseen foe that dominates all aspects of school life, The Principal. Along the way he meets Babydoll15, the love of his life, even though he can’t tell her, Sweetie Honey, the most bad-ass ninja to ever grace the Earth, and a quartet of impossibly perfect looking Eastern European girls who are the result of an abandoned KGB project to spy on America.

It’s absurd, nihilistic, narcissistic, and bitingly funny – no pun intended, and that’s just the first chapter. The only other thing I’ve read that is this measured in its planned insanity is Kurt Vonnegut Jr.’s Slaughterhouse Five.

Yet the satire that drives the story is a complicated thing. There’s a very real chance that everything that Guy Boy Man sees as reality is just a twisted acid trip, or some similar demarcation from reality – case in point, throughout the book Guy Boy Man imbibes enough whiskey as to kill a full grown Rhinoceros. There are enough clues in the text to suggest that when confronted with the uncaring tedium of the world, Guy Boy Man adopted a perceptual filter that allows him to cope with Western civilization through the tropes of 70s genre movies. Perhaps Guy Boy Man, and the world that Marshall has created, embodies the perceived, if not essential, cynicism that was Generation X’s ethos. Then again, it could be a bad acid trip, who’s to say.

That’s where things get potentially alienating. Guy Boy Man, who is also the narrator of the text, has some rather unusual ideas about the world. For example, he employs a very clever sort of sophistry to explain how religion, specifically Catholicism and Christianity, is a form of piracy. He considers obese people as well as the disabled, both mentally and physically, apt human shields during a gun fight with some “troubled teens”. Also, the aforementioned festively plump factor into Guy Boy Man’s plans to harness human bio-fuel as a means of ending America’s dependence on foreign oil.

One level, it’s quite obvious that Guy Boy Man is echoing the absurd notions of certain fringe minorities were their ideas taken to the extreme. In doing so, the narrator’s voice becomes a way of subverting harebrained politics and policies. A deeper reading of the text reveals a character who perfectly channels the teenage desire to root out hypocrisy in all its forms. But where most teenagers could well be expected to default into outrage and “damn the man” philosophy, Guy Boy Man is The Man. His reactions to the world are that of a fully empowered Stephen Colbert.

So there can be little doubt that this is a highly political and socially aware novel. But hardly anything therein is scared. In so much as I laughed at the one-liners, the deep satire, and the semiotics as foreplay to the most awkward sex scene ever, I can imagine a great many people who won’t be able to get past Swiftian discourses on eating babies under the age of three, or one of Guy Boy Man’s sermons on howtoendhumansuffering.com that is anchored around the idea that killing the unemployed would be the best way to stimulate the economy. It’s not enough to say that some people won’t like this book. Some people won’t like any book. NvPfZ goes out of its way to make light of a great many things that are very important to a great many people. In doing so, the novel offers a powerfully didactic relationship with its readers in that it uses absurdity to comment on existing self-destructive trends within society.

Make no mistake, Ninja Versus Pirate Featuring Zombies might have all the trappings of a light hearted genre romp, but it would be folly to assume it is a frivolous piece of writing. This is a tremendous literary work that draws together a teenage voice of outrage with the various “adult” problems of our world. Like all novels by ChiZine Publications, it’s probably not for everybody, but who wants to live in a world where everything is?