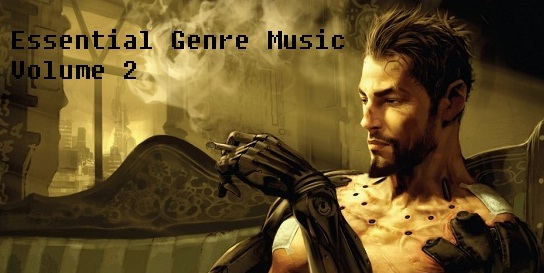 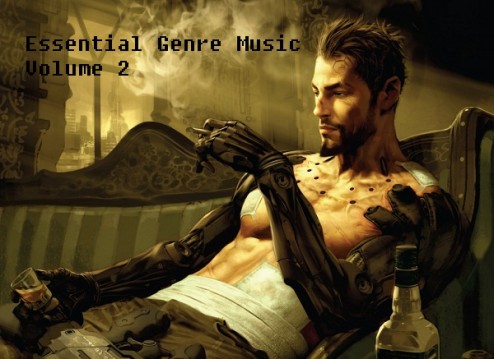 I’ve pulled together fifteen (mostly instrumental) selections from television, movies, games, and anime for this ultra nerdy “what if” CD.

So without further ado, let’s get right into some tunes.

McCann’s work on the Deus Ex: HR soundtrack earned him “best in music” nominations in the Canadian Video Game Awards and the BAFTA’s Video Game Awards. It’s a haunting and powerful piece of music that serves as the perfect complement to Eidos Montreal’s recent post-human masterpiece.

Why this particular piece? Because every time I set out to build something from Ikea, this is the tune that starts playing through my head. More than iconic, the Terran Suite is a touchstone to the very roots of Starcraft’s success as a piece of contemporary mythology.

If I had to guess, “Tank” is probably second to the Space Battleship Yamato anthem as the most remixed/covered song to emerge from an anime series. It’s also the benchmark for any saxophone players who want to prove their musical chops while simultaneously establishing their nerd cred.

I don’t know why I didn’t think to put this on the first volume of essential genre music. In the thirty years since the song was first heard by human ears, it has become the godfather of music to all things cyberpunk.

Perhaps not as iconic as “Making of a Cyborg”, the title track to 1995’s Ghost in the Shell, Inner Universe, from the 2002’s Ghost in the Shell: Stand Alone Complex, has always stood out in my mind as a fascinating song. Setting aside the fact that the lyrics are in Russian, Latin, and English, I’m told the range required to hit all the notes is quite challenging.

Yes yes, the actual Doctor Who theme song is awesome. But there’s more to the musical history of the recent series than various takes on a fifty year old tune. As performed by the BBC National Orchestra of Wales, “Doomsday” is tied with “Vale Decem” as the musical high point of David Tennant’s time in the TARDIS.

The rebooted Battlestar Galactica reached its zenith with the second season cliff-hanger “Pegasus”. There, I said it, and I don’t care how much fan rage it gets me. After Admiral Cain died it was all downhill, albeit at a gentle gradient. This song, which built to an epic crescendo during Adama and Cain’s camera-pan face off, accompanies not only the best moment of the series, but arguably one the finest moments in television this side of the 20th century.

Giacchino made a bold decision when he abandoned Alexander Courage’s influence in crafting a new Star Trek theme. Though Courage’s score would be remixed into the ending credits, “Enterprising Young Men” became the headline refrain for Trek’s alternate timeline. Like it or not, it’s here now.

You may not recognize the name, but fans of the British series Spaced will know the song. It’s a song to be played in moments of pure, unrivaled joy. Such moments include getting around giving notice at a job by telling your boss that Babylon 5 is shit (not actually true) so that he fires you.

I don’t know if it’s fair to say that one track on this album is superior to another. Consider that I haven’t watched Aliens in a couple of years, but I could tell you exactly what scene accompanies each piece of music on this CD. If that’s not the mark of a brilliant piece of musical accompaniment, I don’t know what is.

What’s that? You want me to name the scene where this track plays? Fah, child’s play.

This starts playing as Ripley emerges from the service elevator in LV 426’s fusion plant. With Newt in tow she yells out, “God damn you, Bishop,” suspecting that the synthetic has taken the Sulaco’s remaining dropship and fled. Ripley turns around to see the other service elevator, presumably containing the xenomorph queen, rising up. Low on ammo, she tells Newt to “Close your eyes, baby.” At the last second Bishop flies the dropship into the frame, allowing Ripley and Newt to escape. As the ship tries to break atmo, a computerized voice counts down to zero before the fusion plant explodes.

Since 2002, Jeremy Soule has been the composer on the hugely popular Elder Scrolls series of video games (Morrowwind, Oblivion, and Skyrim). I suppose I could have just used the Morrowwind theme since the other two are built upon its back, but listening to the evolution of ten years worth of work is just too fantastic to pass up. Also, the Skyrim bit makes me want to drink a lot of mead and pick a fight with somebody weaker than me, preferably in the East coast of England.

Unlike the cake, this song is not a lie.

Fun fact: The voice of Albanian opera-singer Inva Mula was dubbed over that of the actress playing the Diva in The Fifth Element. Luc Besson’s movies might not be the smartest thing out there, but it takes a certain kind of something to integrate opera into beating the piss out of aliens.