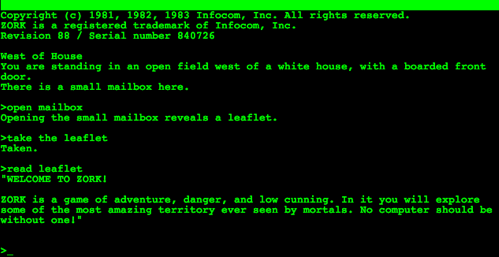 As a reader, critic, and occasional writer, I don’t much care for the second person narrative style. That isn’t to say that I think it’s a pointless thing that needs to die an eternal death in the darkest foulest bowels of hell’s antiquated septic system, not at all. Second person can be quite useful. Choose your own adventure novels demand a second person narrative structure. Decades of Dungeons and Dragons DMs have forged elaborate worlds using the second person. Within more “conventional” storytelling (novels, short stories, modern video games) second person seems like a problematic thing.

First, a quick refresher for the benefit of anybody who doesn’t know what I’m talking about.

First person narrative: I couldn’t stand the sound of his voice for another minute. The way he went on and on, and the way everybody listened as if he was god’s chosen prophet. So I did what any coward would do; I kicked him in the nuts.

Note that the narrator is telling the story from their own perspective. FPN is life as you live it every day…or this.

Third person narrative: Adam’s practiced poker face was about to shatter. For three years he listened to his boss drone on and on about a managerial style that increased ROI each quarter. For three years Adam watched his colleagues genuflect to the pontification of a blowhard who outsourced his work to unpaid interns. At exactly eight minutes into the 10am meeting, Adam stood up from the boardroom table, walked to the front of the room, and smiled as he kicked his boss in the balls.

Notice here that the story is being told from a perspective external to the character in question. Both first and third person perspective should be quite familiar to anybody who has ever read a novel. Now things get weird.

Second person narrative: You can’t stand listening to him any longer. He’s taken so much credit for other people’s hard work. Everything he’s done is built on the backs of people half his age but twice his intelligence. You didn’t go to business school for this. You know going to Human Resources won’t solve anything. You don’t think about your next action, really. All you do is stand up, square yourself to the man who has stolen your life, and drive a size ten-and-a-half wingtip firmly between his legs.

Hilarious as crotch shots may be, these vignettes illustrate an essential problem with second person narrative. “Adam” might be the sort of guy who kicks his boss in the junk, but what if “You” are not?

What if the story is about something less cathartic than avenging one’s self against a boss? What if a reader is being told that they are standing at the feet of a dead body, licking a blood stained knife as a crimson pool slowly wraps around their feet. I don’t know about you, but sometimes I don’t feel like giving up who I am to become somebody else’s monster.

A narrative built in the more conventional first or third person style can safely assume that a reader wants an experience removed from their own world. To read Dune, or The Adventures of Sherlock Holmes is to ride on a worm behind Paul Atreides or follow along in the cab next to Holmes and Watson. At no point does the story ask the reader to do anything other than maintain their suspension of disbelief. Who the reader is, is irrelevant to the issues at hand. Second person narratives depend on a reader’s willingness to abandon their sense of self. If you, the reader, are not willing to become the serial killer, the half-demon spawn of a fallen angel, or the sexy horse vampire, then the story falls apart.

So what’s the problem? For my part, I hate audience participation (save for choose your own adventure novels, especially the ones that offer a hierarchy of endings [Hierarchy of Endings is the name of my next band]) in printed text just as much as I do in theatre. As a reader, I’m looking to be entertained. As a critic, I’m looking for subtexts and themes. As a writer, I’m looking to see what I can learn from the words in front of me. How can I do any of those things if I’m spending the lion’s share of my mental energy turning myself into someone who is compatible with the narration?

What am I gaining by undertaking this effort? Who is the writer to make me think I would even want to become this person? After all, the reader is the consummate and professional voyeur.

When evaluating recent encounters with second person narratives, the reader in me invokes Benedict Cumberbatch as he sighs “Bored”, the Jay Sherman in me says, “This is weak character construction masquerading as high concept bullshit”, and Adam, the scribbler of words, desperate for the approval of his peers, moves on to a new teacher as the story appears to be the ultimate form of telling without showing.

So to the writers of the world, I would offer these words, for whatever devalued Hellenic currency they are worth: it is infinitely easier to appropriate a concept, culture, historical figure, political ideology, or religious doctrine than it is to bank on your reader’s desire to abandon their sense of self as to give your story its necessary cohesion. If a reader is unable, or outright refuses, to participate in what you, the writer and possibly your editor and publisher, think is a transcendent experience, then all of the deeply layered metaphor and allegory in the world won’t amount to jack.