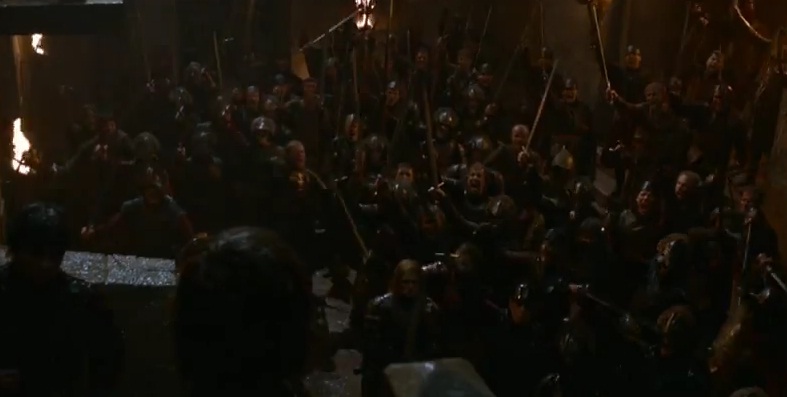 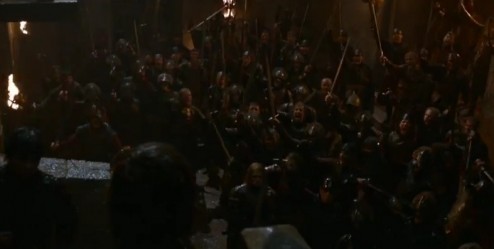 This might be the easiest review/recap I have ever done for Game of Thrones. The whole episode, written by George R. R. Martin himself, was set in King’s Landing, and damn if it wasn’t the epic pay off that viewers have been waiting for all season.

Let’s start with a quick run through of the salient events.

Varys meets with Tyrion as the men of King’s Landing enjoy their last night of peace before Stannis’ fleet arrives. As Tyrion gets armoured for battle, Varys offers a map of the city’s extensive underground as well as a confession that he thinks Tyrion to be the city’s only hope for survival. Heavy is the chest that wears the pin of the Hand.

The Battle of Blackwater Bay itself is a thing to behold. I can’t recall an episode of Game of Thrones that ever looked quite so expensive. The sea battles, land skirmishes, and eventual siege had all the elegant brutality of a high priced Hollywood feature. 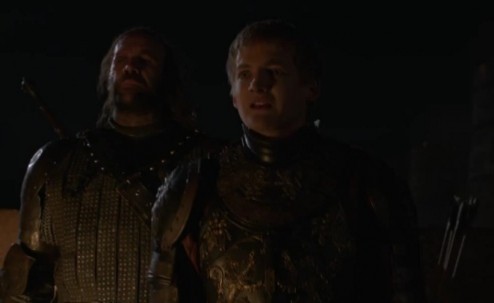 Round one of the battle goes to the Lannisters. Tyrion blows up a significant portion of Stannis’ fleet with a single ship filled to the gunwales with Wildfire. But it’s a one trick pony that fails to turn Stannis’ attack. It’s also worth mentioning the look of sheer horror on Peter Dinklage’s face as Tyrion comes to understand that he, and he alone, is responsible for killing all those men. While Joffrey gets giddy, Tyrion learns something of war’s human cost.

Therein, the “legitimate” heir to the Iron Throne sends his surviving men ashore to begin breaching the walls. Clearly traumatized by the sight of an immolated Blackwater Bay, the Hound quits the battle, telling the Lannisters and King Joffrey to fuck themselves (I’m not being colourful, he actually says “Fuck the King”). Despite losing one of their champions, the Lannisters put up a good fight, yet Stannis has a clear numerical, if not a tactical, advantage. Fearing for his life, and encouraged to do so by his mother, who sends Lancel to tell Joffrey that playtime is over and he’s to come home, Joffrey quits the battle leaving the burden of leadership on Tyrion. With some difficulty, Tyrion manages to rally the men, leading them into the sewers so that they might flank the Baratheon force at the wall.

Once again, Peter Dinklage gets one liner of the night when he says, “Those are brave men knocking at our door; let’s go kill them.”

Tyrion’s counterpunch routs the vanguard of Stannis’ troops. There is the briefest moment of celebration before the main force of Stannis’ men charge into the battle. Something quite interesting happens here. During the battle Tyrion is fighting in the thick of it. He’s saved from a Baratheon sword by what looks like a man dressed in Lannister livery. But then that very same Lannister solider swings a sword at Tyrion. The only thing that saves Tyrion’s life is the quick intervention from his squire. Still, the Hand of the King catches a sword tip to the face and falls to the ground, probably not dead, most likely in shock, and arguably the bravest half-man in all of Westeros.

Meanwhile, Shae has commanded Sansa out of the tower containing the highborn women. She returns to her room only to find the Hound waiting for her. Newly retired from the Lannister army, he offers to take Sansa home to Winterfell as wants to go somewhere where there’s no fire.

With Stannis Baratheon rampaging atop the battlements, somehow he was he only guy to make it up a siege ladder without getting his head squashed by a rock, and an army battering down the mud gate, things seem their darkest. Enter deus ex machine Tywin Lannister to the rescue.

Amazing as the battle was, the real star of the episode has to be Lena Headey’s drunken/honest portrayal of Cersei in a powerless situation. 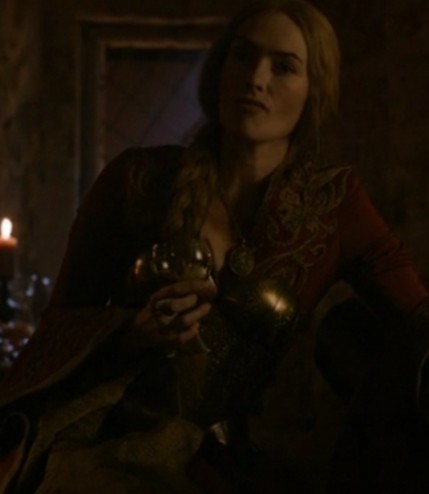 Unable to connive, seduce, or puppet master her way out of the siege, Cersei takes to drinking. In doing so, she gets very ugly, yet remains supremely vulnerable. Some of her statements echo those of other women who “should have been born men” within fantasy environs. For example, Cersei demonstrates her Machiavellian leadership style when she tells Sansa that that the only way to rule (unless you’re a Stark) is to make your own people fear you more than they fear the enemy. Eventually she takes on a more practical tone, especially when she tells Sansa to cut the bullshit and start learning that the world is full of killers up to and including her beloved father. Toward the end of the episode, she falls apart back on what she told Sansa a few weeks earlier: all a mother can do is protect her children.

Cersei orders Joffrey off the wall, morale of the troops be damned, and manically cradles her youngest son on the Iron Throne. As she prepares to give her non-awful child a dose of Nightshade poison, so that he might be spared the rapine and slaughter of Stannis’ men, we can see the mask that Cersei wears to fulfill her role as queen-regent shattering to the floor around her. Yet in the instant that Tywin opens the doors of the Red Keep and proclaims the battle won, her duty bound visage is restored to its previous glory. Such is the talent of Lena Headey that over the course of an episode she can gradually unravel her character, and then put her back together on command.

I imagine that next week will return to the “all over the world” style of storytelling, further subjecting us to Dany and Jon’s dull plot arcs. All we can do now is hope that the Lion’s share of the episode will be dedicated to Robb and wherever his army ends up. Also Arya, I’d like to get a proper end of season wrap-up/cliff-hanger for Arya.