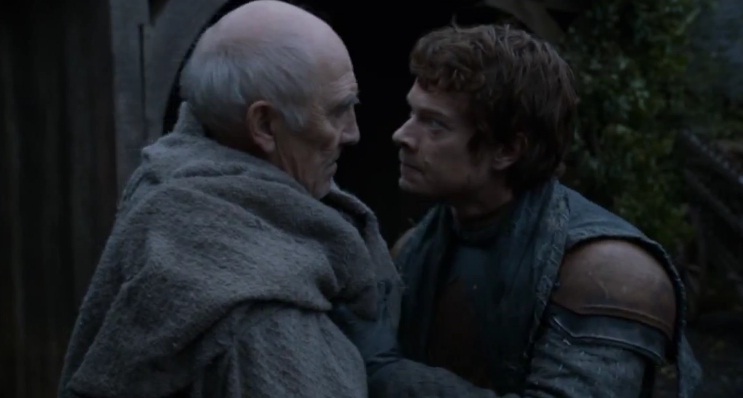 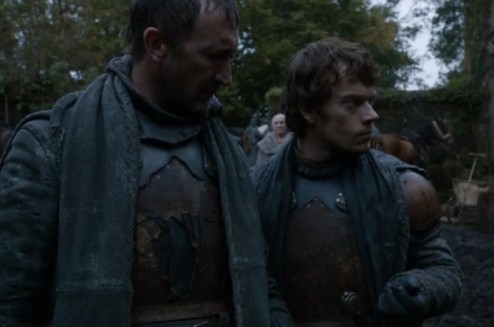 This week on Game of Thrones, life is a prison and the choices that we make are its bars. How poetic.

Let’s go East, South and North for this episode. That way recapping is like eating a really expensive steak served in a cheap hamburger bun.

I spent a good chuck of Saturday playing Game of Thrones: the board game. During which time I complained about how bored I am with Daenerys Targaryen’s story as well as Emilia Clarke’s substandard acting abilities. My friends assured me that by the fourth novel Daenerys’ character becomes interesting. At least we can all have something to look forward to in the Summer of 2014.

Long story made short, Daenerys whines about her missing dragons. She then complains to Jorah Mormont about how she can’t trust anybody, the irony of which becomes apparent when the face mask lady from a few episodes back reminds us that Mormont almost let her Daenerys die in exchange for a pardon from Robert Baratheon. Finally, Daenerys begs the city fathers of Qarth to help find her dragons. In a surprise turn of events Xaro Xhoan Daxos and the jaundiced fellow from the House of the Undying admit to stealing the dragons. The two men then proceed to have all of the thirteen killed so that Daxos might become king of Qarth. Once again Daenerys’ decisions have trapped her in an untenable situation.

Poor Sansa Stark wakes up to find that she’s had her first period. Fearing that she will now be able to bear Joffrey’s children, Sansa and Shae attempt to destroy the evidence before anybody else in the palace notices her bloody sheets. Shae intercepts one of Cersei’s hand maidens but returns to find The Hound in her room. 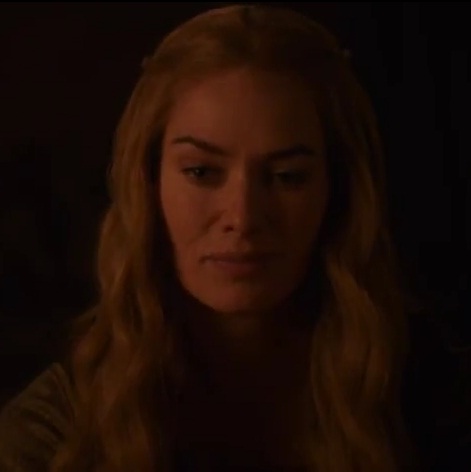 Surprisingly enough, Cersei is rather understanding toward Sansa. In a moment of forthright honesty, Cersei warns Sansa that a queen should only love her children as loving anybody else, including her husband, would make her weak. Later, during a conversation with Tyrion, Cersei admits that Joffrey is a lost cause. And again, it’s a moment of gut wrenching honesty conveyed through Lena Headey. As a mother, Cersei Lannister wants to protect her son, but she knows that he’s a power mad tyrant. Cersei’s fear, a fear she voices to Tyrion and in doing so all but abandons the pretence that Robert Baratheon is Joffrey’s father, is that her eldest son’s madness is the result of her incest with Jamie. For his part, Tyrion seems almost sympathetic toward his sister, a woman who last episode was vowing revenge against him.

Robb has another run in with the sexy nurse lady. In need of medical supplies, she accompanies Robb to some negotiations where the Lannisters are apparently surrendering to the Starks. When did that happen? Did I miss something? 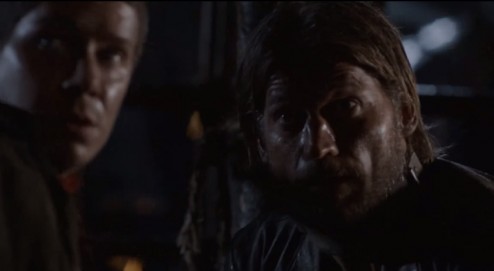 Meanwhile Alton Lannister, who you’ve probably forgot about by now, returned to Robb bearing Cersei’s refusal to acknowledge the Stark’s peace terms. Alton then gets thrown in a pen with Jamie Lannister. Therein the two trade stories about being squires before Jamie beats Alton’s head to a bloody pulp as a means of facilitating his escape. It’s a futile gesture as he’s very quickly recaptured by the Starks, whose banner men are now howling for Lannister blood. Catelyn Stark manages to impose some order, but the peace is a dubious one at best. During a subsequent conversation with the Kingslayer, Lady Stark draws a sword on Jamie as he pokes Catelyn’s raw nerve concerning Jon Snow and Ned Stark’s extramarital affair.

Tywin Lannister is treating the death of his man in the previous episode as an attempt on his own life. For want of information on the would-be assassin, he’s taken to torture, hanging, and village burning as a research tool. So much for the Tywin who put a stop to needless waste a few episodes back.

There’s a bit more banter between Tywin and Arya on the finer points of Westeros’ history and Tywin’s legacy to his children. This results in Tywin calling Arya out as a high born girl masquerading as a commoner. Arya parries with a story about how her mother was the handmaiden to a Lady, ergo she knows proper manners and etiquette. Line of the night goes to these two when Tywin asks, “Has anybody ever told you that you’re too smart for your own good?” and Arya answers, “Yes.”

So the big question, does Tywin know she’s actually Arya Stark? Or is he operating under the assumption that she’s the daughter of a minor noble from the North? 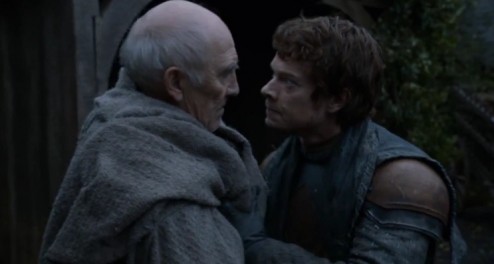 NB: I continue to call supreme shenanigans on what the writers are doing with this plot arc. More so after finding out that in the novel Theon Greyjoy took Winterfell through deception, rather than force of arms.

Theon’s big theme this week is that it’s better to be cruel than weak. So he beats the ever loving piss out of one of his men for letting Bran and Rickon escape with Hodor and the wildling woman. Then, Theon literally releases the hounds.

The motley crew, pun intended, take a bunch of horses and go riding after the fugitives. I guess they brought those horses with them on their one boat? Because anybody who knows anything about horses knows that a horse is rather particular about its rider.

As for Bran, Rickon, and company, they come upon a farm but Bran insists that they not expose themselves to the people there, lest the hounds track their scent and Theon torture the farmers for information. In the episode’s final scene, there’s a hint that Bran and team have been captured. Returning to Winterfell, Theon, intent to set an example for the people in the city, hoists up two charred bodies before the city gates.

I know we’re supposed to think that’s Bran and Rickon, but I’m not buying it. My suspicion is that Theon did indeed lose Bran and Rickon’s trail and decided to BBQ some locals in keeping with his cruelty before weakness policy.

Wake me up when something that isn’t predictable happens. The wildling captive spends most of her screen time pointing out the obvious flaws in the Night’s Watch prohibition on sex while simultaneously pointing out just how capital-F “Free” she and the other wildlings are North of the Wall.

The girl’s continuous attempts at seducing Jon, both sexually and ideologically, away from the restrictive life of the Night’s Watch eventually leads her to another run for freedom – big surprise there. Jon follows her into a boxed canyon where a dozen or so wildlings appear from nowhere with spears in hand.

Though predictable, the scenes with the wildling girl add a bit more depth to the wildlings’ back story. Despite living on the other side of the Wall, the wildlings share a common ancestry with the people of the Seven Kingdoms via the “First-Men”. I know a friend of mine who would have a lot of fun looking at this reveal through the lens of displaced indigenous peoples. Since the wildlings don’t live in cities and castles, they are not civilized. So why not build a wall to keep them isolated on the shitty land and away from the rest of Westeros’ proper folk.

I’m curious to know if the books lend themselves to any such discussion – somebody who’s read them can feel free to leave a comment and fill me in.

A step in the right direction compared to last week. This week also produced a bit of subtext worth parsing out here and there. With Stannis’ invasion less than a week away from King’s Landing, I think we have to view this as the calm before the storm.