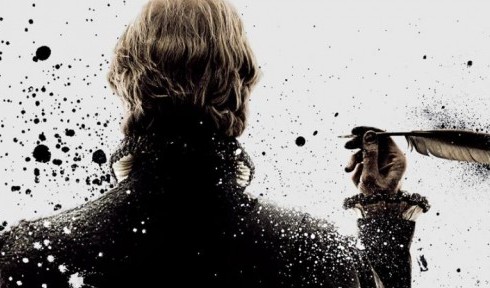 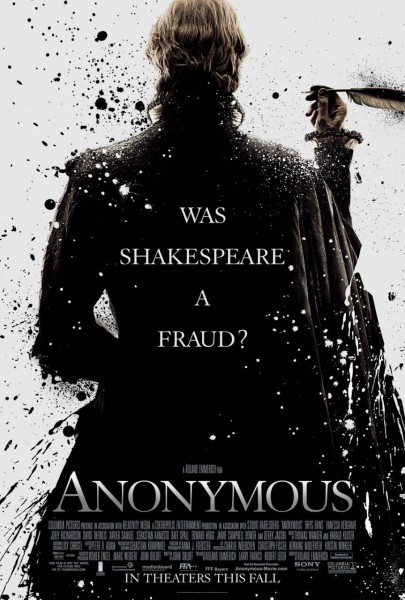 Summary Judgement: Though lacking the general appeal of the Bard’s plays, Anonymous remains a fascinating, if overambitious, piece of storytelling.

There’s a certain something to seeing a director whose claim to fame is big budget action films trying his hand at historical revisionism. This sensation ranges somewhere between curiosity and anxiety; indeed it is made all the more acute due to the fact that Emmerich’s work over the last few years (2012, 10,000 BC, The Day After Tomorrow) has received no end of critical and popular scorn. Therein, I expected Anonymous to be the worst sort of bodice ripping sensationalism. While the entire experience is big, arguably too big, in a way that comes very natural to Emmerich, it’s also thoughtful and quite creative in its story telling.

Contrary to what the trailers suggested, this movie isn’t exclusively about the authorship of William Shakespeare’s plays. Rather it is a time shifting affair through the life of Edward De Vere, seventeenth Earl of Oxford. De Vere, who spends his life writing poetry rather than focusing on affairs befitting his high station, gives his work to Ben Jonson, then an anonymous bankside playwright. De Vere, like any writer, aspires to have his works known to the public, even if he can’t take credit for the words. This film’s Shakespeare is little more than an illiterate actor. He usurps creative credit from Jonson before extorting De Vere so that he might build the Globe theatre. All of this is set amid the turbulence of Queen Elizabeth’s final years, the looming threat of James I and his Catholic friends in Spain, and the Earl of Essex’s rebellion against the Queen.

Given this description, there are likely three sorts of people who will enjoy this movie: writers, students of English literature, and history nerds. Unlike most of Emmerich’s body of work, this isn’t a movie that is made for everybody. Even within the target demographic, some people might be put off by the liberties that the story, also written by Emmerich, takes with Shakespeare as the non-author of his plays, Christopher Marlowe as a jealous pariah who snitches to the Master of Revels about the seditious metaphors in the plays of his contemporaries, or Queen Elizabeth’s string of bastard sons. But if a viewer can suspend their disbelief for even a short time, they will quickly find themselves wrapped in a world as richly detailed as John Madden’s Shakespeare in Love.

While I’m not normally one to care/notice things like costuming in Hollywood movies, Anonymous managed to make me pay attention. The volume of labour that went into clothing the film’s extensive primary cast, as well as the army of extras – remember this is Emmerich, he likes to do things BIG – is almost beyond my capacity for measurement. The contrasts between the attire (and teeth) of England’s ultra rich, the theatre going mob, and every person of every rank in between is sensational. Similarly striking is the evident devotion to authenticity within the film’s numerous set pieces. There is a persistent feeling of dirt and grime within London’s public spaces, so much so that it is a palpable relief when the perspective shifts into a relatively clean palace or manor home.

The aplomb with which the cast carry this story is no less outstanding than the costuming and sets. Though some actors do tread a bit too close to scenery chewing, Rafe Spall as Shakespeare and Trystan Gravelle as Marlowe are the worst offenders therein, I was inclined to enjoy it. Such tendencies to embellish seem fitting within a period piece that attempts to frame Shakespeare’s plays as propaganda tools in the cold war of Elizabeth’s succession. For her part, Vanessa Redgrave played Gloriana as a passionate queen, a character who  more closely resembled Cate Blanchett as Elizabeth than Judi Dench.

It’s the pacing that stands out as Anonymous’ most problematic component. Again, Emmerich is attempting to bring a certain type of cinematic spectacle to historical revision. The attempt is laudable if a little over ambitious. Part of the problem is that both of the stories within Anonymous play like the “A” plot. On the one hand, there is an examination of the difficult world writers inhabited in protestant England. It’s a glimpse into a society that looked at playwrights with distain, as peddlers of blasphemy and heresy, back when those things meant something. At the same time Anonymous is also a story of politics and intrigue; an examination of Tudor history through the lens of what might have been, rather than what was. At times, bringing these two worlds together feels forced. To invoke the language of the time, there is an unnatural mixing of social orders. This cross spectrum of late-Elizabethan society is rarely seen on screen, big or small, which contributes to the film’s overall originality. The unfortunate trade off is a story that runs a bit long for the effort, and perhaps fails to deliver a suitable payoff for taxing its viewer’s attention span.

Given this film presumes a certain type of audience, and may yet alienate within that niche, it’s no wonder Anonymous came and left theatres without an abundance of fanfare. However its tendency to explore the psychology of the writer, the compulsive need to write and be recognized, will no doubt resonate with anybody who has ever put pen to paper. As well, English lit/History aficionados who are willing to accept this movie as historical fiction will find something to their taste.

Anonymous will not find the Bard’s broad appeal, nor that of Shakespeare in Love. Nevertheless, it remains a beautifully assembled and generally well executed film. Those with even a passing interest in Shakespeare, spectacle, or historical drama would do well to give this film a watch.