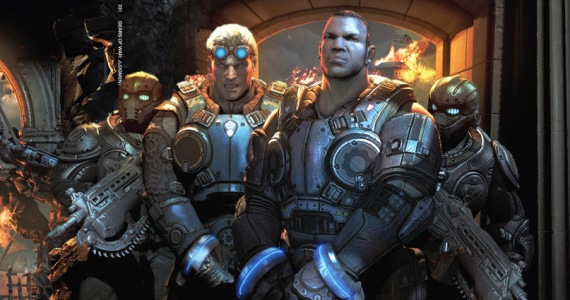 For a moment, let us ignore the likely future where everybody who owns an XBox 360 is going buy the fourth installment in the Gears of War franchise. And while we’re employing our cognitive dissonance, we might as well disregard the obvious fact that a fourth Gears game, from a narrative point of view, is nothing but naval gazing. I could also point out that prequels are generally an indication of creative bankruptcy within a property, but that might belabour a point that better people than me have made a long time ago.

Make no mistake, I do not begrudge Epic a chance to make more money with an established brand. And mark my words; Epic is going to make money with Gears 4, if only out of consumer loyalty. Yet as a fan of the series, and somebody who even read a Gears of War novel, this new game seems like a missed chance to shift the focus of Gears while maintaining its spirit.

In the scant calms between bouts of gunfire, the Gears of War trilogy offers a compelling story of redemption and loss. Marcus Fenix’s introduction is that of an ex-convict who had been left to rot in a military prison for putting loyalty to family above loyalty to the state. Dominic Santiago, Marcus’ best friend, begins as a man on a quest to discover the fate of a wife lost to the vicissitudes of war. By the end of the second Gears of War game, these quests are resolved. Therein the story of the third Gears game is that of a search for purpose.

*Spoiler ahead for Gears of War 3*

Arguably neither of the two main characters are able to find a purpose in life. Despite winning the day, Marcus ends Gears 3 as an accomplice to the Locust genocide. As he strips off his armour, Marcus admits to fellow Gear Anya Stroud that he doesn’t know what to do without the fighting. Dom’s fate is found somewhere between heroic sacrifice and suicide, probably closer to the latter. In finding his wife’s mind and body shattered by Locust torture in Gears 2, Dom effectively loses the one thing that kept him fighting.

Yes, there is senseless gunplay in the Gears franchise. And yes, there is a lot of blue collar dialogue from Delta Squad. However, beneath its base trappings, Gears of War is one of digital media’s foremost war stories. Rather than undermining the narrative authenticity of these two characters, a smart decision, Epic is shifting the focus of Gears of War: Judgement to Delta Squad’s two other members: Damon Baird and Augustus Cole. The potential problem is that Baird and the Cole-Train don’t quite fit the established character model.

The most obvious incongruity with Gears: Judgement is Delta’s favourite misanthrope being billed as Lieutenant Damon Baird. Gears of War has always been a war story told from the “working man’s” point of view. Lieutenant Kim, Delta Squad’s commanding officer in Gears 1, dies at the end of the first act. From then on out, Marcus, a mere Sergeant in the Coalition of Ordered Governments’ Army (COG for short), acts as Delta’s leader. The narrative pay off in such a decision is that the player is always as much in the dark, with respect to the larger scope of the war, as the game’s central characters. Hearing the taciturn Colonel Hoffman tell Marcus that something is “need to know” becomes a shared experience between gamer and character. Maintaining that shared experience with Lt. Baird may prove a difficult proposition as officers by their very nature know more about strategic matters than the men under their command. Not to mention this casting might seem a retread of established motifs given that Gears: Judgement will tell the story of Baird and Cole’s fall from the COG’s grace. We’ve already explored redemption as a conceit with Marcus, is it going to work a second time with Baird? Are players going to empathize with Cole, a millionaire sports star turned fighting man due an “alien” invasion? I hate to say it, but I’m not convinced that Cole has the chops to be anything other than comic relief.

Redemption also misses an opportunity to tell a story set before Emergence Day. Prior to the Locust’s attack, Sera was a planet divided between two supra-national entities, the Coalition of Ordered Governments and the Union of Independent Republics. We know from game lore that these two entities fought a series of conflicts known as the Pendulum Wars. The details of those conflicts are scant save for references to resource scarcity and control of the super fuel known as Immulsion. In fact, other than the Gears of War novels, the canonicity of which are up for debate, what little gamers know of Sera’s back story is gleamed through in-game ephemera. Propaganda posters nailed to crumbling walls, overheard conversations, and throwaway references hint at the world that existed before the Locust’s emergence. Nothing would say, “the same but different” like bringing the oft hinted at pre-Locust world of Gears of War to life. Then again, maybe only political science geeks and history nerds would want to know about the Cold War conflicts that happened before the underground monster apocalypse.

In the end, Gears may always be a man versus monster experience; if only because chainsaw bayonets are a monstrous weapon when used on a human. It’s easy to feel mighty chopping up an over sized Locust drone. Gears draws quite heavily on the classic “alien other will unite mankind” theme as seen in novels like Starship Troopers. But are the dogmatic and geopolitical differences between the COG and UIR sufficient to merit battlefield butchery? Probably not. If that’s the case, it’s probably a better business investment to keep treading the same ground for a profit, then risking jeers for neutering the combat experience just to push the franchise’s fictional frontiers.