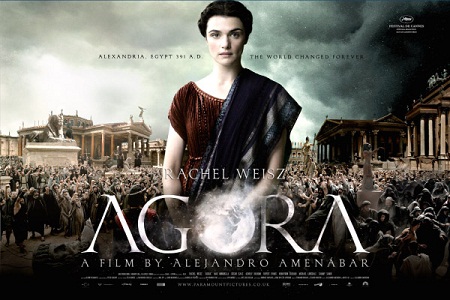 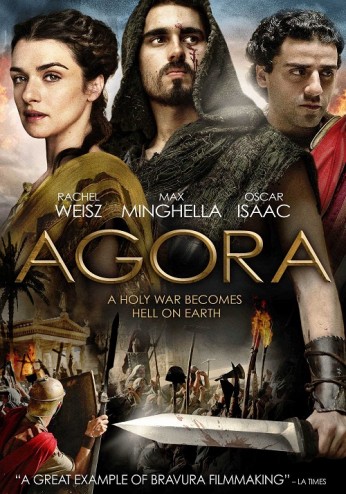 After screening Agora one question stood out in my mind among all the others: How much flak did this film catch after its 2009 release? Why would I ask such a thing? Primarily because Agora is to Christianity as The Passion of Christ is to Jews. Well, maybe not quite as overt as Mr. Gibson’s opus, but not so far off, either. In fairness, Agora holds the Pagans of fourth century Alexandria to task as much as it does the city’s Christian and Jewish population. After a cursory google search revealed no significant front page controversy, I can only speculate that not enough people cared about a Spanish made film that focused on the life of an Egyptian female astronomer to justify any wide spread outrage. Quite the shame, really, as Agora is the sort of film that demands discussion.

Agora is a story told in two acts. The first act concerns the destruction of the Great Library of Alexandria. Compared to Alexandria’s agora, where mobs of Christians gather to harangue the city’s Pagan population, the Library, and its surrounding walled suburb, is a bastion of civilization and tolerance. Hypatia (Rachel Weisz), as librarian and professor, teaches students of all faiths that there is more uniting them than dividing them – a sentiment that is echoed throughout the film. Too bad the even handed Hypatia’s idealism never amounts to anything in the face of constant persecution and bloodshed.

Say what you will for the rest of the film’s historical authenticity, Agora is true to form in its understanding of the relationship between Christianity and Roman culture. The stoic Hypatia and her father keep a number of household slaves. One of those slaves, Davus (Max Minghella), finds himself torn between his love for Hypatia and the freedom that Christianity promises. Under the tutelage an outspoken Christian named Cyril (Sami Samir), Davus begins to see the inherent inequity in the Roman system. In this, the film illustrates that Christianity was not just about venerating Christ, but also a convenient dogma for mobilizing the urban poverty that propped up Roman civilization.

Act one comes to a head as the followers of Serapis, patron god of the Great Library, form a mob to attack the Christians for past affronts to Alexandria’s Pagan population. From this one act of violence springs an all out riot that sees the Christians, greater in number than any of the Pagans could have imagined (Roman hubris at its finest), besiege the Library. Roman Legionaries manage to hold back the Christian mob until the Emperor orders that the Pagans be pardoned for their role in the riot. As compensation for their losses, the Christians are to receive the Library.

As pagans, students, and slaves rush to save what few antiquities they can, the Christians break through the Library’s gates. The unruly rabble, joined by Davus, take to burning books, smashing windows, and toppling statues of the old gods. It is the triumph of barbarity against civilization, all in the name of Christ. The Legion, the very symbol of order in the ancient world, is powerless to act against their Emperor’s order despite the chaos it creates. In fact if this moment in the story demonstrates anything, it is the film’s framing of the Roman Empire as a victim of Emperor Constantine’s vision of religious tolerance.

Therein, Agora’s second act is a study into the dangers of fundamentalism. Orestes (Oscar Isaac), who during the first act declared his love for Hypatia, is now the Prefect of Alexandria and a converted Christian, as are most of Alexandria’s Pagan population. In the twenty years that separate the first act from the second, Cyril has become the Bishop of Alexandria. Davus, now freed from Hypatia, has joined the Parabalani: a semi-monastic order of morality police that resonate with a contemporary Iranian counterpart. Despite losing the library, Hypatia has continued her work as a teacher, astronomer, and now adviser to Orestes.

Having resolved the Pagan “problem” Cyril and the Christians turn to Alexandria’s other problems, namely Jews and non-believers.

Thus the Church of Christ transitions from a pugnacious rabble to a xenophobic, misogynistic, and utterly tedious organization of doctrinarians and thugs who will stone, stab, or denounce any who would question the primacy of god and the church. As enforcers of the most simplistic reading of church law, the Parabalani are little more than a street gang against whom Orestes and the troops under his command are powerless. All the while, Hypataia is almost ignorant of the state of affairs within the city. She focuses her mental energy on Ptolemy’s construction of the cosmos. Only Cyril preaching a gospel of absolute good and evil forces her from her studies and adds a motif of religion versus science to the film.

Toward the end of the two hour runtime, Hypatia’s earliest messages on brotherhood are lost. Absent is the civilizing, albeit un-egalitarian, rule of Rome. The film is a descent from order to theocratic chaos, all at the hands of Christianity. Or is it? The base brutality of religious conflict, though specific to this film, is not unique to Rome, Alexandria, or Christianity. The history of ambitious men who appeal to the credulous with simple logic is hardly restricted to matters of the soul. While Agora is heavy handed at times, it would be a mistake to assume it is as simple as the sum of its parts.

Like Christianity, Judiasm, and the ancient religions of Greece and Egypt, Agora can be understood on a surface level. From there, fiery condemnations or atheistic praise can be served up in equal measures. Examining Agora under greater magnification reveals a story that shows not only the mistakes of the past, but those of the present. To ask the question in another way, is Agora taking a hard stand against Christianity, or does it simply have the audacity shame people who have not learned from the mistakes of 1600 years ago?

Agora may not be the best piece of historical fiction ever created, but in my estimation it is a well layered allegory. Those who would take instant umbrage at seeing Christianity, Judaism, or Greco-Egyptian paganism portrayed in a less than flattering light, even if the intersection of history and film may be closer than some would care to admit, would do well to avoid this particular story. True to Hypatia’s philosophical roots, the experience will evoke more questions than answers. Perhaps those questions need not have been wrapped in such incendiary grab, but great questions rarely accompany quiet moments in the human experience – even if that experience is an amalgam of others.