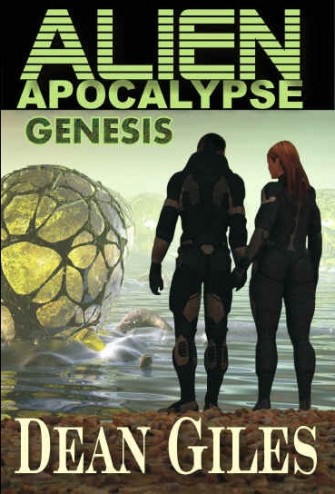 Alien Apocalypse: Genesis is the third release in UK author Dean Giles’ series of alien invasion novellas. The second published story, Alien Apocalypse: The Hunger is actually prequel to the first story Alien Apocalypse: The Storm. The Storm, which I had the pleasure of reviewing when it first came out, introduces readers to the series’ protagonist Leon Weber, an ex-convict sentenced to four years in prison when he inadvertently killed the man who had just murdered his wife. Two weeks before Leon’s release, a comet burns up in the Earth’s atmosphere. Unfortunately for humanity, the comet housed an alien plant that quickly takes seed on Earth and begins Terraforming our world and all animal life there upon. Genesis begins immediately where The Storm ends; Leon and his son Elliot are intent on finding a way to weaponize a stockpile of crude oil, seemingly the only thing that kills the alien plant.

When I first reviewed The Storm, I likened the efficiency of the plant invasion to that of the Martians in H.G. Wells’ War of the Worlds. This story, which sees father and son walking down stretches of abandoned roads in the south of England amid widespread environmental destruction, echoes a science fiction take on Cormac McCarthy’s The Road. Thankfully, Giles’ work is not nearly as gloomy or pessimistic as that of Mr. McCarthy’s.

Where an argument could be made that The Storm is perhaps too heavy in its world building, Genesis offers much more in the way of a focused narrative. Scenes alternate between Leon’s first person narration and that of the other worldly consciousness that is driving the invasion. For the first time in this series, Leon is at a disadvantage compared to the reader. While I initially thought that the alien perspective tipped a bit too much of the author’s hand with respect to the series’ eventual endgame, I can not deny that the extra knowledge, on my part, added something special to the overall experience. Toward the end of Genesis I almost caught myself yelling at Leon for not figuring out what I already deduced. That sort of reader-character engagement is worth an extra scant paragraph or two of exposition.

Despite being titled Alien Apocalypse, Genesis explores themes a reader would expect to find contained within a standard human apocalypse. In a scene that once again finds common ground with The Road, Elliot insists on leaving a group of thugs with some food after their failed attempt to rob him and Leon. When the father-son team discover survivors that appear to be slavers it is Elliot who insists on a rescue mission, while Leon is content to move on and leave the people to their fate.

There’s a moral absolutism to the child character that is annoying to the point where I want him to get dissolved by the green alien moss. Yet Elliot’s altruism is a necessary tool in stripping away some of the lustre in Leon’s nature. In fact, Leon takes a few distinct steps toward being an anti-hero within Genesis. Even though keeping Elliot safe is at the forefront of Leon’s actions, he’s not beyond threatening, almost bullying, behaviour when provoked to anger. When a rescued slave offers herself sexually to Leon, his moralizing about respect for his dead wife’s memory melts away just a little too quickly. Leon proudly reflects that he will never become a user of people, but he is at the very least an opportunist. The personality shift is, however, necessary to maintaining the story’s integrity. Without some pliability in his personal morality, Leon would be little more than a super heroic caricature. With the exception of The Avengers, aliens and super heroes don’t often mix.

Problems with Alien Apocalypse: Genesis emerge not in the story, but in its narration. While Giles has created a fantastic story, he is at times guilty of playing “show and tell” with his readers. In one particular scene Leon and Elliot are arguing over a course of action. Built on strong dialogue and scant narrative details, the father-son animosity is palpable. But where the paragraph should end it goes on to point out that Elliot was getting sarcastic with his father, despite the lad’s obvious attitude. This game of “show and tell”, which I think speaks more toward the author’s concerns for clarity rather than a presumption about the audience’s ability to grasp the context of a situation, happens periodically throughout the novella. It’s not a deal breaker, but it is noticeable.

As a 19,000 word novella, Alien Apocalypse: Genesis is priced quite well at $2 USD. While there are some obvious motifs in play from the likes of Cormac McCarthy and Jack Finney, Genesis is a well paced and creative despite some shortcomings in the prose.

Alien Apocalypse: Genesis is written by Dean Giles. It is available as an e-book from TWB Press.