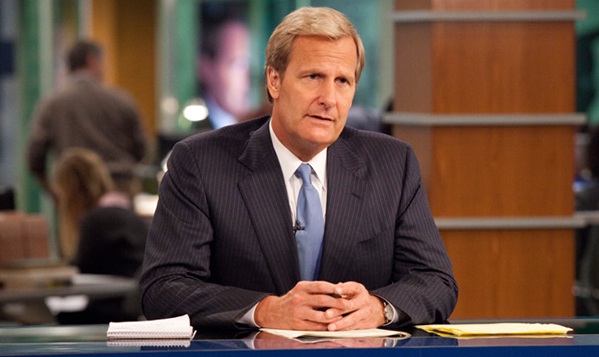 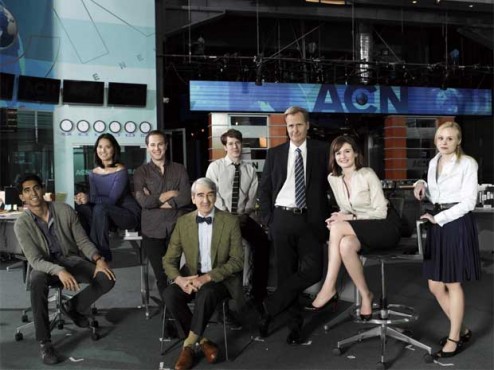 The Newsroom has the dubious distinction of immediately following True Blood on HBO Canada’s Sunday night line-up. Normally the psychic assault of that stupid vampire show, which I only watch to facilitate ruthless evisceration around people who swear it’s the second coming of Lost, leaves me desiring a large scotch and a good book to read. With this week’s True Blood combing the bowels of banality and self-reference to the point that it has become almost beneath my contempt, I decided to jump headlong into The Newsroom.

About twenty minutes into the sixth episode of the series’ freshman season I asked aloud, “Isn’t this supposed to be a serious drama?”

Since I fully intended to watch the show from the beginning, I’ve avoided any extensive reviews of the series. My only foreknowledge was in the form of  August C. Bourre’s tweets and this one trailer.

I expected Sorkin’s old media take on Gibbon’s The Decline and Fall of the Roman Empire. I wanted it to be Sports Night featuring Jeff Daniels as an amalgam of Dan Rydell, Casey McCall and Dr. Gregory House. What I saw was something unexpected.

Certainly The Newsroom doesn’t have the screwball comedy of Sports Night. But it does have banter, really good banter. Yet that banter never comes at the expense of actual issues. Case in point: there’s nothing funny about Will McAvoy’s on-air defence of Islam leading to credible death threats against his person. Nor is there anything amusing in discussing the Fukushima nuclear plant meltdown. Within The Newsroom, the comedy is never in the news. Rather it’s in the writing and timing that turns 75% of the cast’s conversations about news production into sniping matches between co-workers. After only one episode, I can’t tell if The Newsroom is a journalism satire that draws on office comedy tropes, or a giant meta-mechanism for criticizing our culture’s relationship with information and ideas.

A case could certainly be made for either argument. Within this week’s episode, Will formulates a plan to restore civil discourse to the internet by stripping the anonymity from the comments section on ACN’s website. Framed as the last angry liberal (even though he’s a registered Republican), Will McAvoy puts the hubris of white privilege into perspective when interviewing a former Rick Santorum aide, who just happens to be both black and gay. Will also manages to hold fellow journalist Sloan Sabbith (played by Olivia Munn) to task for not pressing harder in interviews when she knows her guest is lying. There’s an aura of validity to all of Will’s ideas. Yet his best intentions lead to personal strife for all involved, and outright calamity for Sloan when her attempts to be aggressive lead to her making up the news. Though if we turn back to comedy for a moment, the aftermath of Sloan’s on-air attack against a spokesman for the company managing the Fukushima disaster leads to what is possibly the greatest chewing out that Sam Waterston has ever delivered.

I suppose, then, a better question to ask is if Will McAvoy’s reaction to internet culture, lowest common denominator politics, and the 24-hour news cycle is meant to criticize the aforementioned aspects of modernity, or showcase the futility of trying to change these unfortunately ubiquitous elements of life?

With Daniels commanding half the episode’s story, Olivia Munn’s character occupied much of the remainder. In short, I was damn impressed with her work. As I never watched Attack of the Show and only ever caught two of her Daily Show bits, I can’t say that I have much of a baseline for Olivia Munn’s talents. I have heard a lot about her, however. Indeed, I remember the absolute shit storm of chauvinism that shadowed her when she became a Daily Show correspondent. I also recall some ersatz controversy about her cosplaying as slave Leia. Perhaps the world has moved past those issues, perhaps not; if it hasn’t, the acting chops that Munn displays in The Newsroom must be seen as a giant middle finger to the trolls and critics who spent so much time and energy running her down. Heartbreaking is the only word that describes Munn’s performance after she throws an old friend under the bus in pursuit of McAvoy’s impossible standards of journalistic integrity. If this one episode is representative of her entire performance in the series, I wouldn’t be surprised to see a best supporting Emmy nomination in her future.

So after an hour of watching The Newsroom, here is my take away. Daniels and Munn are fantastic; the show is worth watching if for no other reason than seeing these two talented actors work. Sam Waterston as television’s answer to Perry White is magnificent. The drama is punctuated with comedy that finds humour in news production, rather than the delivery of said news. While the series seems somewhat less charming than Sports Night, it’s no less witty. Most important, to me at least, The Newsroom works with the big ideas of the day, but doesn’t attempt to package answers to questions therein with a thirty-minutes-or-it’s-free delivery – save for a clear hostility toward Rick Santorum and his retrograde ideas.

Now to watch the first five episodes and see if my theories hold up.