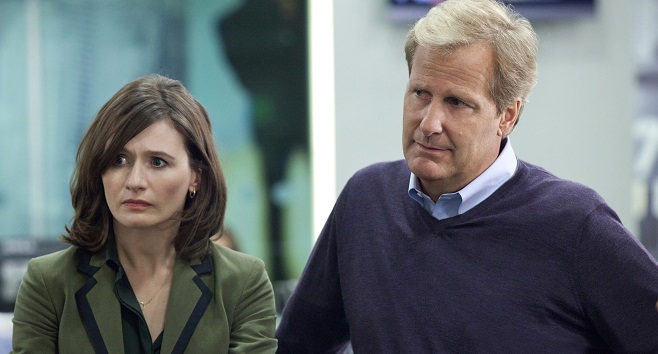 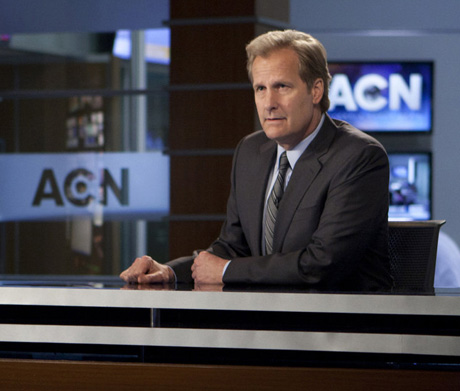 After due consideration, I’ve come to the conclusion that The Newsroom is a show I love to hate. Since the Fukushima episode I have tuned in every Sunday night at ten, contributing to its old-school ratings as if it were the bygone days of television that the series seems to eulogize. And by eleven I come away from it saying, “What was Aaron Sorkin thinking?”

Each week Sorkin’s name is slathered over the writing and directing credits, so for the purposes of this review I will hold him directly accountable for every hanging lantern, pointless pratfall, and reduction of female characters to base fits of histrionics. It’s a testament to Emily Mortimer’s acting abilities that she could get through those laughable “My life has been good and honest and pure” speeches. Witness this week as the script had her run the interrogative, “What was the rest of the message?” into the ground. In deference to Mr. Sorkin, I do walk away from each episode thinking “I wish we did live in a world where more journalists placed a premium on rational discourse and an informed population.”

But for a moment, let’s stop and think about The Newsroom’s audience. Though I know my peer group and twitter network hardly constitute an accurate sample, but it seems to me that the sort of people who watch The Newsroom are already invested in ideas of rational discourse – regardless of their specific political affiliations and opinions. Yet the approach the series takes to its call for critical thinking borders on proselytizing. Yes, I know Will McAvoy is, for many of my American friends, a point of wish fulfillment. Yet the enlightened mind will only accept the same message for so long, regardless of how much the ideas resonate, before repetition begins to breed contempt. Bearing this in mind I would ask Mr. Sorkin how he plans to grow the series’ audience. Assuming Sorkin, as the writer/director/creator of The Newsroom, is aware that probably half of his target audience, Americans who can afford premium cable or have the chops to download it illegally, won’t care for ideas which are the anathema of popular Republicanism as demonstrated by the RNC, I must inquire after his master plan for getting more people to watch a show which revels in dialogues previously deemed to be un-American under the Bush administration? Apropos of News Night, The Newsroom must find its 2.0 update lest it bore the current audience.

Upon examining the series finale, there are obvious avenues for change which would facilitate a long-term growth potential. For one, Sorkin needs to do better with his female characters.

As if to round out certain shorter episodes, this season has seen an on-again off-again story of unrequited love between Maggie Jordan (Alison Pill), Jim Harper (John Gallagher Jr.) and Don Keefer (Thomas Sadoski). Setting aside the fact this love triangle looks to be ripped from The Office’s playbook, it reached new heights of tedium this week. After Jim becomes the topic of a fight between Maggie and her best friend, Maggie leaves a downtown bar and takes to yelling at a Sex in the City bus tour full of “woo girls”. Therein she delivers an impassioned speech proclaiming herself the true single woman in New York, as seen here.

Pro tip: If the previous scene has two female characters barfing all over the Bechdel Test, do not as a male writer/director get high and mighty with respect to your show’s portrayal of women. I’ve only watched as much Sex in the City as my partner has made me (I am told that puts me at the top of the curve as straight males go vis-a-vis knowing the major plots and relationships of the aforementioned drivel) but for the last two episodes Maggie is certainly as insipid and tiresome as Carrie Bradshaw after she cheats on Aidan with Mr. Big. The sound you are now hearing is me slow clapping Sorkin’s myopic chutzpah.

I don’t care if this is some high irony in action or if Sorkin has explained the scene away as more “television on television” meta-criticism, but enough is enough. Sorkin didn’t know how to write women as anything other than blow job machines in The Social Network, and he can’t write them now.

What the series really lacks is actual story telling. In fairness, The Newsroom has demonstrated a great capacity for telling compelling original narratives. Unfortunately, the the plot points which explored TMI’s phone hacking, Will’s death threats, and internet trolling felt like The Newsroom’s neglected bastard sons. Pardon me for mixing my HBO metaphors, but anything original, even if inspired by real world events a la Law & Order, was afforded all the courtesy of Jon Snow before leaving Winterfell for The Wall. Aaron Sorkin’s true born children are the stories that venerate a dying medium. If it is yesterday’s news filtered through the nostalgia bloated journalistic integrity of ACN, then it is worthy of the A block. Otherwise, these stories are told in fits and starts and, by rights, would be worthy of their own properly developed episode in any other series. Thus do we return to the core challenge inherent to The Newsroom’s message and audience, the mob will grow weary of a one trick pony. Furthermore, the constant use of fictionalized takes on real events will lead to only one endgame as a means of keeping the audience engaged: the most loathsome of all news features, human interest stories.

Though much of my initial negative reaction to The Newsroom came in the form of a culture shock wherein even non-news journalists in Canada ask hard questions, after one season I’ve squared those ideas against the series’ broader shortcomings. Yet, none of those weaknesses are terminal. The Newsroom can be made better with minimal effort. I would love nothing more than to get through an hour with Will McAvoy and friends without having Aaron Sorkin rub my nose in something, be it American exceptionalism, how his show is better than other shows, or his inability to distinguish between social awkwardness with pedestrian stereotypes in writing Olivia Munn’s character.

Do better, Aaron Sorkin. You did better on Sports Night without relying on schmaltz and nostalgia as crutches. Do better now. Because if you stay the course, the very people who currently support your show are likely to see your picking on the limited intellect and world view of Nancy Grace, and her tragic kith, as bullying rather than useful criticism.