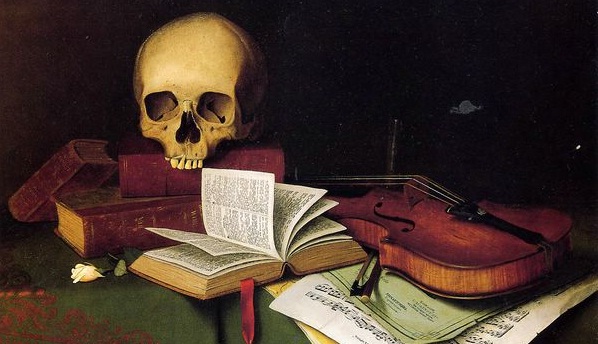 “Eventually it came to pass that no one ever had to die…” These words preface each section of Joe Haldeman’s Four Short Novels. The nomenclature, however, is a little deceptive. Weighing in at just under three thousand words, Four Short Novels is much more a unique experiment in writing than anything that resembles one let alone four novels.

Though I’m loath to reduce things to general labels, attempting to do so proves helpful in framing the strength of this particular “story”. Let’s begin with what it is not. Four Short Novels is neither a novel (obvious), nor is it a short story. It might be the right length to fit into the latter’s definition, but there are four complete, distinct, and separate narratives within the text. For the purposes of this review, I’m going to call Four Short Novels a mirco-anthology of flash fiction.

Each of the pieces within FSN explores immortality under a specific lens. In the first section immortality is a business arrangement: become an expert in a field, sell your knowledge to another so that you might raise a million dollars, and then have Immortality, Incorporated turn back the clock on your life. The second piece examines crime in a peaceful utopia where clones and consciousness downloading eradicates permanent death. In the third story Haldeman speaks on the practical issues of war with an immortal population. And finally, FSN crafts an Earth where death never visits a person so long as they are loved.

Read on their own, each of the flash pieces within FSN are good but nothing spectacular. In typical Haldeman fashion the long-term forecast for humanity is somewhat bleak. There’s also a clear message to each story, which at some points seems almost too heavy handed and obvious. I suspect, however, that this is an intentional move on the part of the author. During the “novel” subtitled “War and Peace” the narrator makes a direct reference to Homer. Consider that The Iliad, as a whole, presents the Trojan War with all the glorious ambiguities that make up the human experience. The individual books of the Iliad, much like each section of FSN, are somewhat more cut and dry: Paris thinks with his hormones; Hector is never quite smart enough. Much like Achilles, the central character to the fourth “novel” misanthropically removes himself from society before ultimately demonstrating he is the only individual capable of character growth.

Of course, if you’re not a huge classics nerd, then the “novels” are probably going to seem a little too much like morality plays.

What binds these stories together is the way in which each exaggerated element of humanity in the throes of immortality comes together to reflect on the current (circa 2000 when the story was published) state of mortal affairs. Therein Mr. Haldeman presents us as a people bound by capitalism yet still undaunted in our limitless ambition. When that drive pairs with essential human flaws and failings, our species is presented with several possible futures. One such eventuality sees humanity destroying itself out of sheer ennui and boredom. How’s that for a critique on North American ethos in the post-Seinfeld Clinton years? Another option sees humanity buckling under the burden of knowledge, reverting to a place of ignorance and innocent bliss. Climate change deniers take note of that theme. When the third way between these two extremes is propping up a system that maintains the status quo, FSN offers a rejection of the entire structure wherein humanity’s only way to thrive is for people to find a reason to live for each other.

In that, Four Short Novels opts for an ending that could easily be construed as cheese, and perhaps it is a little cheesy to say that love conquers all. Still, the deeper message, that living for ourselves within in a faux-meritocracy will ultimately lead to either self-destruction, infinite regression, or stagnation, is a poignant one.

Beyond the subtext, which arguably does require readers to shed a bit more cognitive dissonances than is standard for short fiction, the structure of the story is both classic and innovative. Four Short Novels is worth reading if only to see how one of science fiction’s titans subverts the norms of the short story.

Four Short Novels was originally published in 2000 in the Magazine of Fantasy and Science Fiction.

You can read it for free at Lightspeed Magazine.