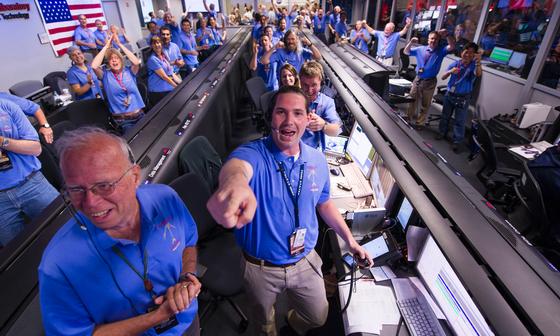 Late Sunday night, or in the wee hours of Monday morning depending on where you are in the world, NASA’s JPL rover “Curiosity” did what Arnie told us to do back in 1990, it got its ass to Mars.

Huzzah for another triumph of humanity over near space.

At 10:32PDT, under the gaze of the internet, the Mars Odyssey Orbiter, the finest faux hawk in the history of space exploration, and a Dr. Carson Beckett body double, a rover that weighs as much as a small car gracefully landed in Mars’ Gale Crater. During Curiosity’s eight month voyage to Mars it covered a distance of roughly 352 million miles. And unlike NASA’s previous two rovers which fell to Mars cushioned in giant airbags, Curiosity employed a controlled descent via detachable rocket pack and sky crane. Landing at a velocity of about two miles per hour, Curiosity touched down on the red planet with more finesse than most of us employ in getting out of bed.

A lot of thoughts passed through my mind while watching NASA’s live web feed. Foremost among them was what the hell is going to happen to NASA if this two and a half billion dollar space buggy crashes and burns? I quickly pushed such thoughts away, instead letting myself reflect on how I would remember this moment if it happened. In a flash it occurred to me that baring something truly extraordinary occurring in the near future, Curiosity would be my generation’s Apollo 11 moment. And damn if we haven’t needed one.

In my thirty years I’ve seen two space shuttle missions end in tragedy, landers crash into Mars because astrophysicists and engineers couldn’t tell metric from imperial measurements, and the over-budget and underwhelming construction of an orbiting space station which is nothing close to the gateway to the moon that we were promised in the late 90s. Where are my generation’s Neil Armstrongs and Yuri Gagarins? What name is more familiar to the public, Chris Hatfield or Lisa Nowak? Where is the BIG THING that in fifty years will let me preface conversations with “I remember when…” My generation’s relationship with space flight has been one of tragedy, budget cuts, and outsourcing to the private sector.

Like everybody else, I made a few jokes on twitter while I sat and waited. When NASA cut to a video that showed how the orbital paths of Curiosity and Odyssey lined up, I cracked wise about Missile Command. For gamers who remember the 90s, I alluded to a nuclear powered rover being a cover for an XCOM Avenger intent on attacking Cydonia. There may have also been a tweet or two about finding Prothean ruins in Gale Crater. But when Curoisty made its final descent into Mars’ atmosphere, I hoped.

I hoped for more than a safe landing. I hoped Curiosity might be the sort of thing people rally behind. I hoped the collective anticipation and enthusiasm of everybody who was flooding my twitter feed might inspire others to remember that optimism and ambition are good things. And I hoped in the fullness of time Curiosity might find evidence of something that will make this world seem like a smaller place. I also got confused about the time delay between Earth and Mars, but that’s neither here nor there at this point. When the seven minutes of terror ended and the words “touchdown” came through the feed, I cheered. Then I broke out my bottle of special fifteen year old “victory” scotch and had a toast to the collective awesome that is the human race.

The shouts from NASA’s live feed, as well as my own, woke my girlfriend. I told her the good news, she smiled and went to check the non-internet news for coverage.

CBC Televsion was revelling in banalities with re-runs of Dragon’s Den.

CBC News was airing a re-run of a picayune documentary on lottery winners.

CTV 1 and CTV Newsnet were showing repeats of Olympic coverage from the day before.

Canada’s national broadcaster and Bell Media’s flagship stations couldn’t be bothered to interrupt reruns and old news to dedicate five minutes to a story that forced us to redraw the frontiers of human experience. How embarrassing for them. How sad for them to have a moment of live news befitting the likes of Walter Cronkite scooped by Wil Wheaton, Felicia Day, John Scalzi, David Hewlett, and us common folk who are so paternally labeled as “citizen journalists”. How utterly tragic for “legitimate” media to perfectly prove its disconnection from the reality of our digital culture, despite pretensions otherwise via flatscreens, ipads, and title cards that include twitter handles. While the CBC and CTV slept, we were there.

And those of us who were there, through the benefit of NASA’s brilliantly executed live feed, were part of something fantastic. Who can say right now what that something might turn into, but we were there for the start of it. Generation X and beyond finally has an Apollo 11 moment. And for the benefit of those among that demographic who look at space exploration with all the cynicism this world can muster, those of us who were there will continue to hope.