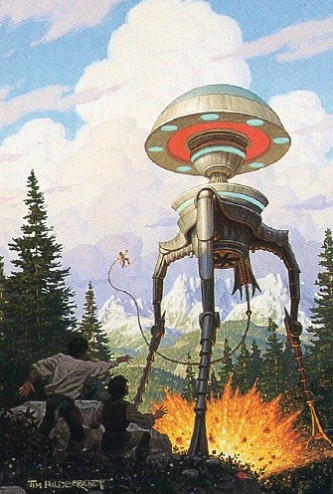 One of the best teachers I ever had introduced me and my eighth grade classmates to the BBC’s TV adaptation of John Christopher’s (aka Samuel Youd) The Tripods Trilogy. It was 1994. I was thirteen years old, the same age as series protagonist Will Parker, and for thirty minutes every other Friday afternoon I was in hog heaven. I didn’t actually read the trilogy until I was in the first year of university. Alas as a young adult I was loath to read anything so labeled.

More recently I impulse bought myself an e-book edition of the trilogy. Out of sheer curiosity I read the forward wherein the editor, or associate publisher, or somebody with a title, claimed that “despite a revival in the 80s, Christopher’s work has fallen out of favour over recent years.”

Fallen out of favour? When did the world of post-apocalyptic YA fiction turn into the Roman Senate? As a cultural icon, I doubt The Tripods Trilogy is able to boast the same sort of success as The Hunger Games. But to accuse something of falling out of favour implies an inherent weakness within the text, something I had no memory of from my initial read through. After re-reading the trilogy I find little that would fit the bill of a novel that has “fallen out of favour”. In fairness, it does have a few problems that would probably preclude a resurgence to the top of the best seller list. Yet as a story that was written prior to the Apollo moon landing, The White Mountains, The City of Lead and Gold, and The Pool of Fire hold up surprisingly well.

The story of The Tripods Trilogy is the story of two English boys’ journey into manhood set against freeing the world, as represented by Western Europe, from alien invaders known to most humans as the tripods. North America, Asia, and Africa are mentioned within the three books, but the primary characters are all identified as either English, German, or French. Point in fact, I don’t think there’s a single non-white speaking character in the series.

The three books that encompass the original Tripods trilogy are stories about boys, for boys. The only female character of any substance within the story appears in the first novel as Will’s love interest. Though unlike Will, who resists “capping”, the process through which the tripods remove all curiosity, rebellion, and creativity from humanity by means of a cybernetic skull cap, Elosie welcomes the experience. For her thoughtless devotion to the tripods, her utter inability to logic or reason, she is rewarded with death and embalming within the Masters’, the aliens who control the tripods, gallery of beauty.

Even the scant colony of “Free Men” within the French Alps is a boys only environment. Though the Free Men send out scouts to recruit rebellious lads before they are capped on their fourteenth birthday, the thought never occurs to this resistance group that females might be useful to the cause.

When Will infiltrates one of the three cities that the Masters use to control the Earth, he is confronted with an environment that is utterly alien to him. In his capacity as a personal slave to a Master, Will struggles against unnatural heat and humidity, increased gravity that kills most slaves within five years, a toxic atmosphere, and bizarre architecture. In their own right, the Masters are more alien than most Star Trek aliens. Christopher did a brilliant job creating an antagonist that is utterly incompatible with terrestrial life in both biology and culture.

After losing Eloise to the tripods, Will never doubts the righteousness of his quest to free the Earth from the Masters. That steadfast belief in the cause, however, allows readers to see some of the realities of Will’s world. At age thirteen, Will was recruited to leave home and join with a bunch of rebels living in the mountains. There he and other boys his age were trained to infiltrate the Masters’ cities and conduct covert reconnaissance. Once that was done Will and his friends set about creating resistance cells across the world as part of a plan to decentralize and expand the resistance. Will Parker might be a hero, but he is also a fully mobilized child soldier. While the older free men plan, it is the boys who go out into the world and actively oppose the Masters. Say what you will about teenage death matches, but I think John Christopher has Suzanne Collins beat when it comes to making teens do questionable things.

Will is often described as being too small for his size and prone to fits of impulsive behavior. Indeed, his lack of forethought is a consist theme throughout the trilogy. One such occurrence results in Will having to kill someone in cold blood to maintain his cover as a “capped” servant of the tripods. The aftermath of that kill very nearly results in the death of a friend. Even when the stakes are lower, Will’s inability to keep calm and think often leads to missions going astray. Although events generally work out well for Will, he’s not the sort of flawless character that one might expect from mid-century YA.

An Interesting Relationship with Religion

The Masters’ greatest strength is their ability to manipulate the human mind. In England and France the tripods are venerated and honoured. When Will travels East into what is presumably modern Turkey, he’s confronted with a tripod cult where all adherents “pause three times a day to pray to the glory tripods.” Perhaps this isn’t a strength, per se, so much as another indication of the novel’s Eurocentric tendencies. However, it is interesting to see one of the best ways humanity has for controlling itself supplanted by an alien other.

As texts get older, so too do they grow apart from English as it is spoken today. When I compared 1000 words from The Hunger Games to a 1000 words from The White Mountains both had comparable Flesch-Kincaid grade levels: 7.5 for The White Mountains and 6.0 for The Hunger Games. Leaving the statistics aside though, there’s little within the mechanics and style of The White Mountains, or any other books in the Tripods Trology, that would confound a modern reader. Though set at the dawn of the 22nd century, the level of technology within the story, save for the triopds and the Masters’ city, is mostly medieval. That said there’s almost a fantasy element to the story which lends itself to creating a world that is set apart from linear time. As a text anchored in history but driven by science fiction, there’s little in the way of a cultural gap that makes the novels feel like something that is feeling its age.

There are some aspects of The Tripods Trilogy that are very telling about the point in which the story was written. There’s no room for women in what is largely a male dominated world. Islam is arguably reduced to an outgrowth of the alien “other”, where people in Christian dominated Western Europe are seen to be less oddly devoted in their beliefs. Yet as an alien invasion story, the writing makes the reader complicit in embracing Will’s transformation into a soldier. To reject this change, and the resistance of the Free Men, is to embrace the Masters’ plan for human subjugation and extermination. In that sense, The Tripods Trilogy is wholly clever and still very much in tune with modern YA lit and contemporary issues.