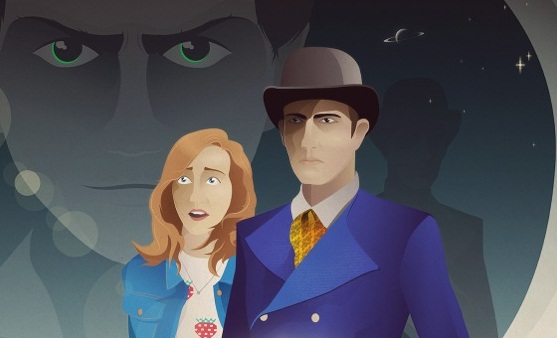 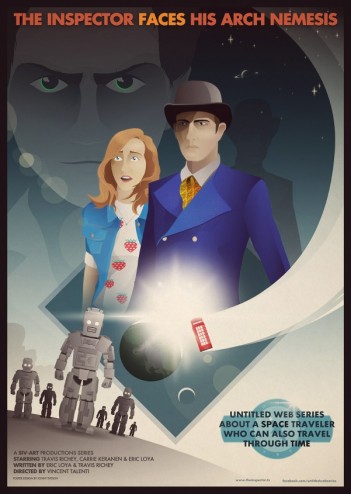 Travis Richey is known on the internet as the creator of the Sesame Street spoof Smiley Town, the roommate comedy Robot, Ninja and Gay Guy, and the internet parody 2 Hot Guys in the Shower. However, fans of the NBC series Community will probably recognize him by another name, Inspector Spacetime. Back in February Richey launched a kickstarter campaign to fund a web series charting the adventures of the Community created Doctor Who send up. One business day after he came on my podcast to promote the project, then known as Inspector Spacetime: The Web Series, Sony and NBC lawyered up. Rather than bowing to corporate tyranny, Richey gave the Inspector a different coat and officially changed the name of his project to Untitled Web Series About a Space Traveller Who Can Also Travel Through Time.

After months of fan supported work, the Inspector’s first web adventure, Boyish the Extraordinary, has gone live. And if the entire series is as sharply written as the premiere episode then we are all in for a treat.

As a series taking some level of inspiration from the ephemera of Community’s screw-ball comedy, it would be easy to expect the same from UWSAASTWCATTT. Yet the tone of this series draws much more from Douglas Adams than it does Dan Harmon. The story is set on “Second New Old Earth 7”, which is described as a planet that came to be recognized as the pinnacle of human culture and civilization by the time we got up to the 42nd copy of Old Earth. Viewers familiar with the Hitchhiker’s Guide to the Galaxy will no doubt revel in the absurdist exposition, while anybody who hasn’t read the book will probably be as temporarily confused as the Inspector’s associate Piper (Carrie Keranen).

Despite having fun with Douglas Adams’ style, Richey and co-writer Eric Loya have not neglected the Inspector’s origins as a Doctor Who parody. Piper’s name is an obvious nod to actress Billie Piper who played Rose Tyler, companion to the ninth and tenth Doctor. There’s a sign in the background of the episode’s first scene that in true Steven Moffat fashion demands, “No Spoilers.” Though Community saw the Inspector square off against the Dalek inspired Blorgons, this episode changes the antagonist to the creatively distinct, yet Cyberman derivative, “Circuit Chaps”. As clever as these ideas are, it is the BOOTH, the Inspector’s means of conveyance, which almost steals the episode. Though only a set piece, the special effects which usher the BOOTH into the frame are some of the best that I have ever seen in a web production. Truly Mr. Richey has mobilized some fantastic post-production talent for this project.

Now we must ask who is Boyish the Extraordinary? (Travis may have left a few hints during the podcast, but the sign said no spoilers, so I won’t say) And will he be so easily hand waved out of the story as the Circuit Chaps? (Probably not since his name is in the title).

UWSAASTWCATTT releases new episodes on Mondays. Kudos to Travis Richey and team for a fantastic start.

The Untitled Web Series About a Space Traveller Who Can also Travel Through Time is written by Travis Richey and Eric Loya. It stars Travis Richey and Carrie Keranen. The first season is directed by Vincent Talenti.