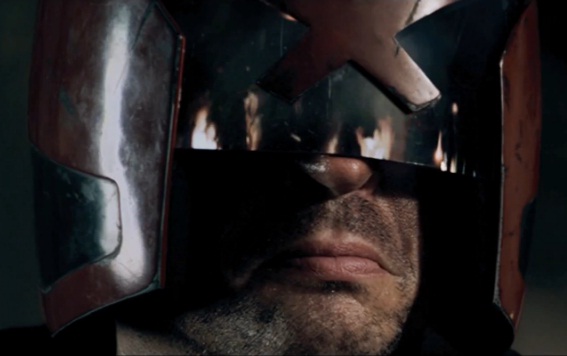 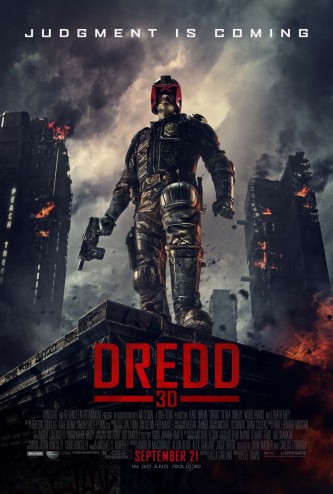 I’m not sure what post-modern film neologism I should use in framing Dredd 3D – which for the rest of this review shall simply be known as Dredd. Discussing Dredd in terms of a reboot invites a comparison to 1995’s Judge Dredd, which may further imply some level of actual legitimacy to the aforementioned movie. The often used term “reimagining” doesn’t work either as the ’95 story was so utterly divorced from 2000AD’s comics as to make Stallone’s movie the reimagined version of Mega City One and Judge Joe Dredd. Instead I’m going to call Dredd a “Hulking” of Judge Dredd. Hulking, which I think I just made up, draws its name from the Ang Lee directed Hulk and the Louis Leterrier directed The Incredible Hulk. Therein two movies emerge from the same mythology, but the latter shows complete contempt for the former in completely ignoring all aspects of its story telling. This results in the Hulked film being much better than the predecessor.

Then again, what isn’t better than this?

How then does Dredd take us to a place where we can forget about Mr. I am the Law? Like so: Dredd is what would happen if Training Day had a one night stand with Die Hard. Only Die Hard ended up getting pregnant, so it gave the infant Dredd up for adoption. That’s when surrogate parents Total Recall (the good one) and Robocop came along and took Dredd as their own. The resulting movie is as much a study in urban entropy, as it is a glorious blood bath which breaks down would-be heroes and turns them into pragmatic anti-heroes.

As a street judge, the embodiment of police and judicial power, Dredd (Karl Urban) knows that he can’t make things better in Mega City One. Dredd goes so far as to explain this to rookie Judge Anderson (Olivia Thirlby) as he prepares to take her out on her training day. Despite the resources and near absolute power of the Judges, Dredd explains they can only respond to 6% of the reported crimes in MegOne. Between this well placed exposition and a few key scenes of poverty and privation Dredd builds a believable atmosphere of overcrowding and wide spread unemployment. In fairness, I think it misses the mark on the actual aesthetic of Mega City One. Shots of the city imply space between buildings and breathing room that simply isn’t there in the comics. Granted, this change is nothing a newcomer to the mythos would notice, nor is it so heretical to the source material as to put off established fans. Yet it is noticeable.

Through luck, or perhaps Judge Anderson’s psychic intuition, Dredd and Anderson end up at the Peach Trees block, a kilometer high apartment building that serves as the setting for most of the narrative. Unbeknown to the Judges, Peach Trees has become the distribution and manufacturing point for a new designer drug called “Slo-mo”, which does exactly what it the name suggests. Where I expected Slo-mo to turn its users into cranked up versions of Neo a la The Matrix, it instead lets junkies slip into the colour palette shifted beauty which exists between seconds. For the audience, the Slo-Mo effect is alternately beautiful and distracting.

When Dredd and Anderson break up a drug den, the juxtaposition of life at 1/100th the normal speed and the frantic pace of urban combat is nothing short of fantastic. It accentuates the violent nature of life in MegOne as well as the absolute power the Judges must apply to stave off the inevitable collapse of society. But when the perspective shifts to follow characters who are high for the sake of being high, the Slo-mo effect gets tiring. Things like post-production shimmer effects on Slo-mo’d shards of glass and viscera end up looking artificial and cheap, probably due to the waste of time and resources that is modern 3D.

As for the remainder of the story, it is very much in the tradition of Die Hard, except inverse. When the prostitute turned gangster Ma-Ma (Lena Headey) seizes control of Peach Trees and locks down the block with Dredd and Anderson inside, they have to fight their way to the top floor to restore order and judge Ma-Ma. And in that mission, all of the principle players nail their roles.

Though Karl Urban has the fewest lines of dialogue, he executes perfectly as the Law. Without the benefit of facial expressions north of his lips, Urban strikes the right balance of dead pan, matter of fact, and near indifference to the events unfolding around him. On that point, no small amount of credit is due to writer Alex Garland and director Pete Travis for giving Mr. Urban all the tools he needed to become Judge Joe Dredd.

Lena Headey’s portrayal of Ma-Ma makes Cersei Lannister look like a declawed domestic house cat by comparison. Ma-Ma is vicious, sadistic, and utterly without mercy. What’s fantastic is that so much of her cruelty comes through non-verbal cues.

Not to be out done by the others, Oliva Thirlby manages to hold her own in taking Judge Anderson from a C- cadet to a proficient street judge. Anderson is perhaps my favourite character in the film if only because it would have been so easy to take her rookie idealism and turn it into a farce of weakness. Instead, Anderson proves herself as strong as Dredd in her willingness to pull the trigger. If we stop to think about the broader implications of Anderson using her psychic abilities to torture information out of a perp, granted they had already found him guilty of attempted murder of a Judge, we can make case for Anderson being even more dedicated to the Law than Dredd. Dredd sentences and executes as the situation dictates, but Anderson violates the very essence of an individual as a matter of course.

I have only one significant point of contention with the script. As if to fill in a third act that would have been too short on its own, Dredd introduces a few corrupt Judges to the mix. And while Judges do go bad from time to time, the idea that four Judges would just sell themselves for money seemed a little implausible. Again, if I wasn’t somebody who enjoyed how MegOne could break a Judge in the comics, I likely wouldn’t have a problem with this appropriation of a time tested “cop movie” trope. Either way, it speaks to a bit of a troublesome plot slowdown in what is otherwise a well paced production.

In the final assessment, Dredd does a lot of things right, even if it stumbles a little along the way. From a distance, the aesthetic of Mega City One is a little too close to home. MegOne isn’t contemporary Toronto or New York with a bit more traffic. But what Dredd misses on the essential late 21st / early 22nd century hell hole look, it more than makes up for in tone. Dredd is a brutal story of an anti-hero in a decaying world. As such, Dredd ignores a lot of action movie gimmicks. The good guys shoot first. The bad guys shoot straight, well straighter than most. It is subtle political commentary paired with a blood bath in the finest tradition of Paul Verhoeven. For fans of the comic strip, and newcomers intent on discovering one of the bleakest visions of the future, Dredd is the movie we should have got fifteen years ago.