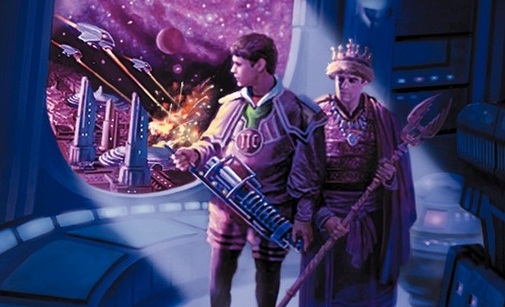 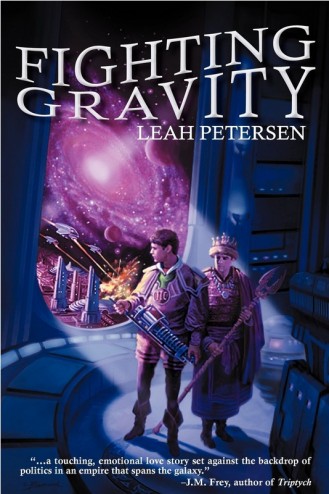 Only after I purchased Leah Petersen’s Fighting Gravity did I come to realize it is something outside of my usual bailiwick. Though the book touches on many themes, at its core, it remains the story of a relationship between two men: one the ruler of a galaxy spanning empire, and the other a prole from the slums of Mexico. Everything else that happens to the novel’s central players orbits this first principle.

But much to my surprise, my consumption of the novel, with all its court intrigues and lovers’ quarrels, was nothing short of rapacious. Would that I was only going to say one thing about this book, it would be to praise it for getting me, a wholly unromantic heterosexual male, invested in a narrative which convincingly puts the Prince and the Pauper in bed together.

Though chronicling the relationship between Emperor Rikhart IV and Jacob Dawes, Petersen walks readers through a subversion of class and class structure. As a member of the “unclass” Jacob Dawes is born into a life of poverty and privation. Despite the conditions of his birth, he possesses a one-in-billion gift for theoretical and applied physics. Because of these talents he is selected for admission into the elite Imperial Intellectual Complex. Jacob’s work at the ICC, which comes with one too many scenes of bare ass caning for my taste, is so revolutionary as to attract the attention of the Emperor during a tour of the facility. Through his utter disregard for social mores and station, which manifests as a well intentioned propensity to speak his mind when he should hold his tongue, Jacob earns the Emperor’s friendship. The relationship evolves from there.

All the while, Jacob is confronted with the realities of court life, up to and including ambitious nobles who see his relationship with the Emperor as the height of impropriety. This is perhaps one of the most interesting aspects of Jacob as a character. Rarely have I wanted to throttle a made up person for being so myopic as to not understand the nature of the world around him. For all his genius, Jacob is thick. He’s as thick as they come. As the Emperor’s boyfriend/scientist-in-residence he is perpetually telling off Dukes, questioning the Emperor’s policy decisions before assembled council, and reducing complicated matters of hegemonic empire building to simple binaries of right and wrong. It’s the sort of behaviour that would have made any of Jane Austen’s characters die from a fit of apoplexy. Despite all of this, Jacob remains a likable character. Even though his early naivety is consistent with his low birth, Jacob stands as a voice for populism within an aristocratic society. Each time he draws a line in the sand, and is requisitely punished for his obstinacy, Petersen’s talent as a writer evokes such a strong pathos that it is hard to not sympathize with Jacob’s plight.

Indeed, Leah Petersen deserves another feather in her cap for managing to take the concept of a courtly romance, developing its manners and graces sufficiently to suit any nineteenth century novel – notwithstanding the lasers and space ships – but rooting it firmly within a contemporary culture. When an author blends science fiction with history there is always a chance it will become something so far removed from either school of thought as to necessitate a Dune style back-of-the-book glossary. Fighting Gravity has no such trouble. Though set on a recognizable version of future Earth, internal history is largely ignored. Thus the reader is allowed to engage with the narrative as it unfolds.

While things do work out well for Jacob and Peter, there are some very dark undertones to this novel. Scenes set within an imperial prison colony are as gritty as the worst parts of Rita Hayworth and Shawshank Redemption. These chapters certainly work within the confines of the novel, but they are so bleak, and such a stark contrast from the world of the Imperial Palace and the ICC, as to be from an altogether different book. However, this change of narrative venue is necessary to illustrate just how far of a gap there is between Jacob’s natural low-born standing and his meteoric ascendancy to life at court. It’s a plot tactic similar to what Jane Austen did to Fanny Price half way through Mansfield Park; wherein the protagonist is temporarily cast down from an easy life in the country into a life of bank side scullery. Instead of peeling potatoes and sharing a bed with siblings, Petersen subjects Jacob to space madness and sexual assault.

Fighting Gravity quite aptly proves that traditional romantic literary conventions are compatible within a science fiction setting. Moreover, as a reader who begrudgingly read romance novels as they appeared on university syllabi, and only willingly revisited them when zombies or sea monsters were added into the mix, I must admit it was very easy to get drawn into this novel. If Leah Petersen is so kind as to give us a sequel, I will certainly read it.

A novel by Leah Petersen