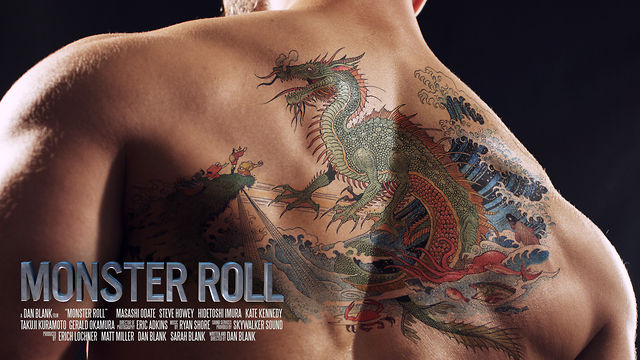 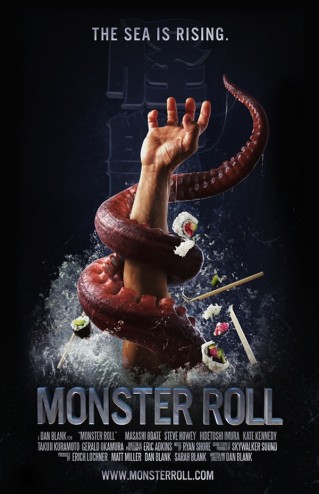 Written and directed by Dan Blank, Monster Roll is a six minute proof of concept short, channeling  the best conceptual elements of classic Japanese monster movies and the fantastic gusto of 80s screen gems like Ghostbusters. But where something like Godzilla worked with 1950s nuclear anxiety, Monster Roll resonates with the very real twenty-first century problem of over-fishing and resource scarcity.

The film’s opening narration frames the central conflict as nature’s reaction to a broken promise on the part of humanity. Therein, a Japanese legend speaks of a bond between man and the sea. For our part, man promised to only kill what he would eat, and eat all that he killed. The movie then opens on a quintessential North American douche bag stuffing himself with sushi, utterly disrespecting the chef’s efforts as well as the traditional accoutrement of the meal.

For that scene alone, Monster Roll seems to be as much a cultural commentary on the worst sort of sushi restaurant patrons, which perhaps reflects on the Western appropriation of an Eastern culinary practice, as much as it is the hook for a monster movie. All of this happens before a giant tentacle emerges from the restaurant’s sink and starts strangling the sushi chef.

During its short run time Monster Roll establishes a conflict, creates a sense of empathy for the sushi chefs turned last line of defense against sea monsters, and scores some very well placed laughs amid the chaos. Moreover, the computer generated monsters are quite convincing in their ability to interact with flesh and blood actors.

Even though the short looks to be set in California, I’ll admit that I’m quite pleased to see Asian actors speaking Japanese within the movie. If Ben Kingsley being cast as The Mandarin in Iron Man 3 teaches us anything, it’s that some elements within mainstream Hollywood do not really understand race. It’s the same phenomenon which brought us an almost entirely white principal cast in The Last Airbender – though race was the least of that movie’s problems. Granted it’s a sad state of affairs when sub-titles threaten to hurt a movie’s appeal, but I’m glad to see this film demonstrating the courage to keep a culturally appropriate cast and language track.

A classic man versus nature story as told through giant sea monsters.

Unlikely heroes rising from their humble origins to do great things.

Adept injections of comedy as a means of bringing the audience into the story without imposing too much on their suspension of disbelief.

Also, approbation from the likes of Moon and Source Code director Duncan Jones.

Here’s hoping that Dan Blank and team can quickly secure funding to shoot the feature length version of this film.

Head over to www.monsterroll.com for behind the scenes features and additional details about the project.