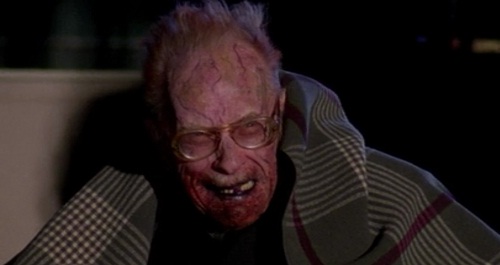 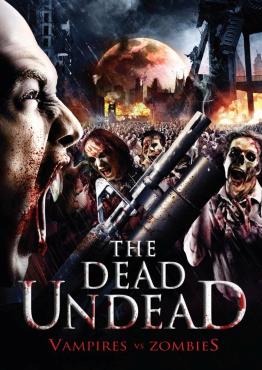 First of all, I’d like to thank my good friend Amber Porter for suggesting The Dead Undead as a Netflix’s Basement review candidate. It’s such a rare thing to actually feel the minutes of one’s life slipping away, second by painful second. As bad movies go, this one has to be one of the worst. Then again, The Dead Undead is so bad that it becomes a sort of dubious comedy wherein I’m laughing at somebody else’s “hard” “work”. Normally I would feel bad for doing that, not so with this movie.

Purple lens filter to cheap out on low-light shots – check

The Dead Undead’s first act is pretty much standard horror fare. Some teens, played by actors in their mid 20s, go away for a (sex romp?) weekend at a hotel. When they arrive, the hotel looks abandoned. Of course, it’s not abandoned. The hotel is some sort of nexus point for an army of zombies.

For a group of teens on a (sex?) romp, the gang brings a surprising amount of firearms with them. Naturally they are unable to repel the undead assault until at the last moment, of the first act, they are saved by the A-Team. Hold on to the Deus ex Machina feeling, kids. It’s the only literary device the writer knows.

Actually, the saviours are not quite the A-Team. There are five of them, and among them is a woman. But they have a van. And holy shit do they fire a lot of guns.

In fact, the entire second act of this movie is the A-Team, and some other guy who seemingly wanders into the plot, shooting guns. If the camera isn’t tight on a gun firing, it’s close on somebody falling down from an implied gun shot. Back and forth, first the slow hammering of an AK-47’s firing mechanism, and then the low budget ludicrous gibs of third rate squib packs exploding on extras. The bodies of the uncredited horde covered in blood as muscle men and a guy who looks like Ron Jeremy fire their big, heavy, powerful guns.

I can’t believe it cost 1.1 million dollars to make this movie.

Either way, I want to know a director looks at their final product, sees something like that, and doesn’t feel so embarrassed as to disown the project with an Alan Smithee credit. Moreover, I want to know how a director looks at the movie’s ultimate scene, a contrived and poorly executed set-up for a sequel, and thinks, “Yeah, a second Dead Undead is almost certain to happen. I should defiantly leave this final scene as it is.” The unashamed ego, the majestic self-delusion, and the abject hubris is enough to choke a cat.

With its “don’t call us vampires” attention to political correctness (the word is night walker), a guy named Aries (Greek myth) who talks about seeing his dead girlfriend in Valhalla (Norse myth), and porntastic gun battles, The Dead Undead is a new low for contemporary movie making. It’s terrible on all counts. Though if you’re looking to satisfy a hunger driven by Schadenfreude then The Dead Undead might be worth a watch. Otherwise stay far away from this picture.

Tune in next week when I review some other movie as part of my stroll through Netflix’s Basement.