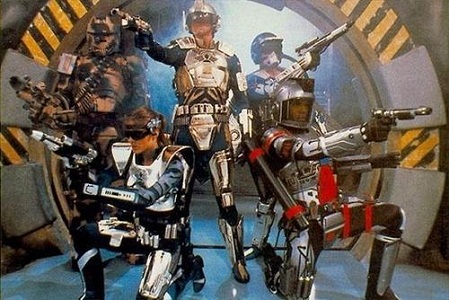 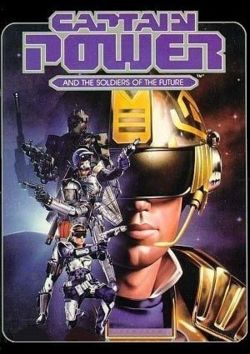 The year was 1987. Transformers was all the rage, and Hasbro was filling dump trucks with money having successfully paired a line of toys with a fantastically addictive children’s cartoon. Enter Gary Goddard and Tony Christopher. They had an idea for a post-apocalyptic science fiction series that would pit man against sentient robots without any of the space Mormon BS of Battlestar Galactica. Enter Mattel. Mattel’s executives were frothing at the mouth with envy over Hasbro’s Transformers revenue. So they came up with a plan to insinuate light gun based interactivity into Goddard and Christopher’s series. Thus was born, Captain Power and the Soldiers of the Future: a series meant to cater to the whole family, but in doing so appealed to nobody…well nobody except me and a few other loyal resistors. Seriously, I took a beat down for bringing my XT-7 Powerjet toy to school for show and tell.

So what went wrong? Captain Power’s story was dark. I mean Ron Moore Battlestar dark. Set in the 22nd century, it saw a scientist named Lyman Taggart (David Hemblen) take control of the world’s robot armies by linking his mind to that of a sentient computer. The scientist came away from the encounter seeing “machine life” as the next phase in human evolution. Therein he began a pogrom against humanity, digitizing humans into computer code so they might be reconstituted into machine bodies at a later date. Taggart’s machines nearly wiped the planet clean of life save for small bands of refugees, scavengers, and resistors. Just picture all the worst parts of the future as depicted in Terminator and Terminator 2 and you’ll be in the right ball park.

Enter “Captain” Jonathan Power (Tim Dunigan) and his father Dr. Stuart Power (Bruce Grey). Stuart was working on a secret weapons project within a hidden base in the Rocky Mountains. “Project Phoenix” would have turned the tides in the “Metal Wars” in that it transformed a single human soldier into a mobile weapons platform capable of resisting digitization.

Sadly Pap Power died before the “Power Suits” could go into mass production. Vowing revenge for his father, Jonathan and a band of four other resistors took up a campaign of asynchronous warfare to bring down Lord Dredd and his machine Reich.

In concept, it’s fantastic. Dread was the embodiment of every nasty bit of 20th century nationalism, only in a cyborg body and commanding legions of machine soldiers. The language of hegemony, empire, and resistance permeated each episode. Characters had back stories which gradually unfolded throughout the season allowing for some great narrative depth. In particular, the youngest member of the team Jennifer “Pilot” Chase was a former “Dread Youth” stooge, liberated by the Captain. The series was even a little avant-garde in its treatment of genetically engineered soldiers, biological weapons, WMDs, and the Internet. Of course with Joe Straczynksi, who would later go on to write and show run Babylon 5, posting writing credits for half the episodes such quality long-arc story telling is hardly unexpected.

Ultimately, the show’s biggest strength proved to be its undoing. Children, except bookish power nerds like me, were not apt to catch-on to the subtleties of the story. Meanwhile parents, including my own, had a problem with plopping their kids down in front of a show where the bad guy espoused his plans for a new order. Say nothing for the dubious image of certain human antagonists walking about in regalia reminiscent of a certain German political association. Also, the toy’s “shoot at the bad guys on TV” selling  point barely worked.

After one season the series was canned and Landmark Entertainment, Captain Power’s production company, began a slow fade into the ether. Until recently, this was the end of the story for Captain Power. Now it seems the Captain may be on the brink of a renaissance.

Via Topless Robot and Ain’t it Cool News we’ve learned that Gary Goddard’s new production company has entered negotiations with former Paramount executive Jeffrey Hayes to resurrect Captain Power as Phoenix Rising, a one-hour weekly drama. Noted Star Trek writers Judith and Garfield Reeves-Stevens have signed on as both developers and writers for the new series.

With the promise of details to come, it’s hard not to speculate based on a single press release and a lone promotional video. Which network/cable channel will have the stones to pick this up? When the original series cost $1,000,000 per episode in 1987 money, can the new show look good on a manageable budget? What does Joe Straczynksi think about this, and is he going to get involved with the project?

Here’s what we know.

Judith and Garfield Reeves-Stevens have said that their intent is to begin again the story of Captain Power, NOT to “fix Captain Power.” The new series will explore how the world of the Machine Age came into being, while delving into the rich history of the characters. Though the actors will likely be different, fixtures such as Jonathan Power, Pilot, Scout, Tank, and Lyman Taggart/Dread will all be in play. Former series star Tim Dunigan has also said that he is involved with the process “on some level.”

It may be early days on Phoenix Rising, and maybe I’m channeling a bit too much of the energy that I had as a sixteen year old writing a spec script for season 2 of Captain Power, even though I knew it was a fruitless exercise, but for fans of the series this is some pretty interesting news.

Now to find a way to get Gary Goddard, Tim Dunigan, and/or Judith and Garfield Reeves-Stevens on the podcast.