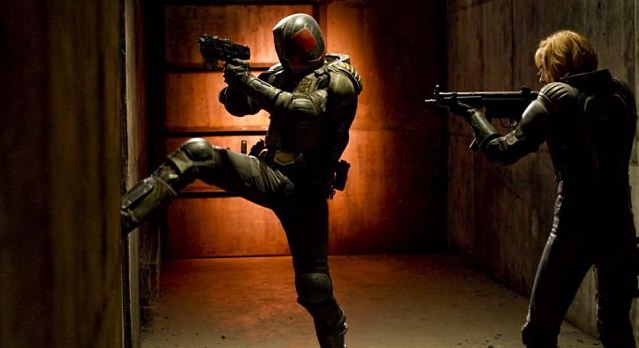 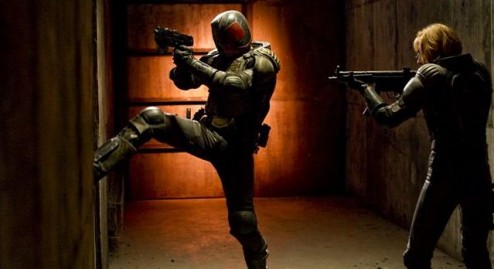 Dredd 3D, which henceforth shall simply be known as Dredd, is a good movie. I’ve said it, fellow writer and critic K.W. Ramsey has said it, and with an aggregated score of 77% on Rotten Tomatoes a lot of other critics have said it. As both a comic book adaptation and an action movie, Dredd gets the job done. Why then is it such a dismal box office failure?

Before I attempt to answer that question, let me put “failure” into context.

Dredd was produced with a 50 million dollar budget. Granted, 50 million is more than most of us will ever see in our lives, but it’s downright humble compared to something like The Expendables 2 and its 100 million dollar price tag. In its opening weekend, Dredd brought in 6.2 million dollars in North American box office returns, putting it in sixth place behind the likes of End of Watch, House at the End of the Street, and Trouble With the Curve. I guess Clint Eastwood really can get away with anything.

Since its debut, Dredd has continued to under perform; its three week total stands at approximately 12.7 million dollars. So what’s gone wrong?

There is nothing good about naming a movie Dredd 3D.

Forgive me for generalizing, but until I’m told otherwise I’ll continue assuming most people cringe when they hear a movie is going to be in 3D. For my time the 3D gimmick takes a movie I want to see and holds a knife to its throat, demanding an increased ticket price in exchange for the movie’s release. I can not think of a single cinematic experience where I’ve said, “Holy shit, the 3D was worth wearing those immersion disrupting glasses and an after the fact headache.” No, not even Avatar.

Now pair a potential audience’s 3D wince with a character name which has yet to achieve pop culture ubiquity in North America. Among said audience I expect the word Dredd tracks to three possible meanings: a misspelling of dread, the name of a character in a bad 90s sci-fi movie, or a beloved 2000 AD comic strip character. And while those who associate Dredd with the latter definition constitute your “shut up and take my money” crowd, I somehow doubt they represent a significant percentage of the movie going audience.

For the non-Dredd fan, the only take away messages in the title are force fed 3D and a reference to some terrible movie from long ago.

Mega City One, Judge Joe Dredd’s stomping grounds, is a nightmare of urban sprawl set amid the ruins of a nuclear holocaust. MegOne is a study in entropy and decay where the Judges, the personification of law and order within the city, are tasked with the impossible mission of forestalling the end of civilization. In short, it’s an ugly world filled with terrible people. Sufficed to say portraying the day-to-day grind of MegOne on the big screen is problematic.

Watering down the violence, crime, corruption, and drug use of MegOne leads to a disingenuous and cartoony movie a la Judge Dredd. Keeping the setting and characters true to Canon means you’re making a movie that caters only to adult audiences. As a critic, I’ll take a movie that is honest to its vision over the contrivances of “universal appeal” any day. But if Hotel Transylvania’s 76 million in two weeks prove anything it’s that the “SSCCATAGAPP” crowd is not a huge box office draw.

Lots of Talent but No Big Names

Karl Urban personifies “that guy” as an actor. Urban was “that guy” in Lord of the Rings. He was also “that guy” in Chronicles of Riddick and Doom. It wasn’t until 2009’s Star Trek that Urban transformed from “that guy” into himself. Granted he’s always done well as “that guy”, usually better than he had any business doing given some of the material he had to work with. But as box office draws go, there are more famous leading men than Karl Urban.

Then there’s Lena Headey. Lena Headey is a fantastic actress. Terminator: TSS may have lost its way as a series, but Headey gave Linda Hamilton a run for her money as Sarah Connor. In Game of Thrones, Headey is sublime as Cersei Lannister. In fact, I count it as an injustice that she has yet to receive an Emmy nod for her role. Those who know Headey’s work know that she writes the book on strong female characters, Dredd’s prostitute turned drug lord MaMa among them. Yet outside of certain genre circles Headey’s name recognition does not measure up to her acting chops. 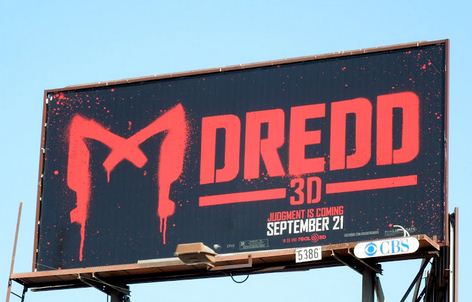 What does the above billboard tell you about Dredd? While the accurate graffitti rendering of a Street Judge’s helmet is enough to get me and the rest of the “shut up and take my money” crowd into theatres, I don’t know about its appeal outside of that niche.

Consider now one of the more “conventional Dredd” billboards. 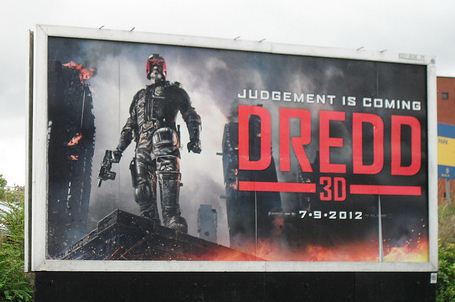 Again, if I didn’t know what the eagle shield, helmet, and pistol symbolized, I don’t know what sort of message I would take from this piece of advertising. I expect I would find it confusing. Why does the tagline say “Judgement is Coming” when this guy looks like Mad Max? Is this an action movie? Is it a science fiction movie? Why is he wearing that silly hat? Who is in this movie?

This said, the feature trailer for Dredd answers most of the questions that the billboard/poster art might evoke.

Granted the future looks a little too contemporary in places, but at least a viewer walks away from the trailer with some level of insight into Dredd’s narrative. Unfortunately, the vast majority of people only see the two minute trailer if they go looking for it on the internet. Such an action suggests some level of pre-existing awareness or perhaps even interest in the film.  When we turn to the thirty second Dredd TV spot, the story of Dredd seems somewhat less impressive.

Even though the final product of Dredd is so far from Judge Dredd that making a comparison between the two is laughable, both thirty second trailers appear to be cut from the same block of cheap one-liner infused schlock. If I had seen the 30 second Dredd trailer before watching the feature trailer, I too would have thought Dredd a monumental waste of time.

Dredd is the sort of movie that would make it very easy to get cynical about the future of movies not aimed at mewling babies and their sleep deprived parents. Though Judge Joe Dredd has a huge fan following, Dredd is no mere work of fan service. It is the kind of action movie that would have fit in twenty years ago with the likes of Total Recall and Robocop. Perhaps then the days of non-family friendly action movies are behind us, and Dredd is the genre’s death rattle. Sure there’s The Expendables, but isn’t that just the apotheosis of bad dialogue, recycled plots, and action stars whose bread and butter movies no longer fit into the current marketing model? Remember what happened to franchised horror movies after Scream? Now movie horror generally comes in one of two flavours, torture porn a la Saw or Blair Witch style found footage movies. Once a cinematic approach gets to the point of self satire, it either dies or evolves.

Yet I still hold out hope that Dredd is the evolution rather than the swan song. Why? Two words: Pitch Black. Even though The Chronicles of Riddick is by most accounts a terrible movie, Pitch Black’s rise to cult status, and subsequent DVD sales, made a sequel viable. Critical acclaim + time = vindication for a movie that under performed in theatres. If Dredd does well in DVD and digital sales, and Karl Urban and Lena Headey’s stars continue to rise, we may just get a return visit to Mega City One.