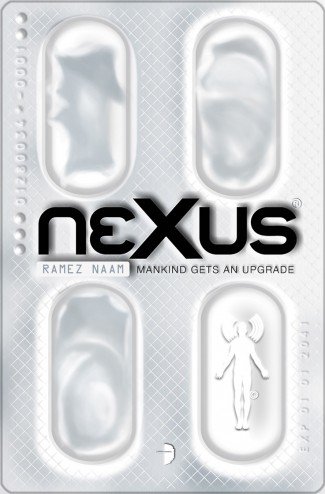 Nexus by Ramez Naam is the second novel I’ve read from UK based publisher Angry Robot Books. Much like my first experience with this imprint, vN by Madeline Ashby, Nexus offers a narrative exploration of humanity’s relationship with advanced technology. In doing so, Naam mobilizes language orbiting contemporary debates on copyright in the digital world, net neutrality, and some good old fashioned Marxism. While the aforementioned concepts are essential to the story, the central conflict lives within the resoundingly grey area of trans/post-humanity. Put into a single question, Nexus asks at what point does our technology change us from what we are, into what we are not? And perhaps more important, who do we select as the arbiter of a decision that speaks to neurology, engineering, philosophy, and metaphysics?

Set some thirty years into the future, the plot focuses on Kaden Lane, a neuroscience PhD candidate at the University of California, San Francisco. Kade, his lab mate Rangan Shankari, and their friends are all practitioners of a designer drug called “Nexus 3”. However, Nexus isn’t so much a drug as it is a lattice of data relays which take up residence inside a person’s mind. The Nexus nodes allow users to experience the thoughts, memories, and consciousness of other users. Adept users, such as Kade and company, can even use Nexus to manipulate the motor cortex of another Nexus user.

Were that not enough, Kade and Rangan have found a way to evolve Nexus into something which takes up permanent residence in a person’s mind. In combining this wetware with an open source operating system Kade has turned himself into something new, a human capable of fully networking his mind with other Nexus users. This potential frontier in evolution, a technology which could unite vast swaths of individuals into a rapturous gestalt of collective understanding and empathy, or in the wrong hands be used for radical thought control, slavery, and domination, attracts the attention of the Department of Homeland Security’s Emerging Risks Division. In a world filled with Chinese clone soldiers, potentially emergent AI, bio-neural hacks to augment any mood or sensation, and human enhancement through nanotechnology, Kade’s discovery of “Nexus 5” leads to his arrest. Therein he must either work with the ERD to bring down another post-human or spend the rest of his life in prison.

Given its direction and philosophy, Nexus is reminiscent of other memorable “us versus them” narratives. Throughout Marvel Comics’ X-Men series readers witnessed the struggle between Homo Sapiens and Homo Sapiens Superior as the government sought to regulate and control those outside the normal definition of humanity. 2011’s Deus Ex: Human Revolution explored questions of state versus free market control with respect to human augmentation through cybernetics. Yet where those stories dealt with relatively small groups of individuals, superheroes and those with the money to afford implantation and regular gene therapy, Nexus expands the scope of potential transhumans to seemingly all of humanity. I mean if perpetually destitute graduate students (though maybe it was only us social science grads who lived on ramen and the scavenged leftovers of catered conference talks) can afford to permanently augment themselves with a neural architecture, which makes assimilating new data akin to Neo learning Ju Jitsu in The Matrix, why not everybody else?

Asking “Why?” and “Why not?” forms the basis for Nexus’ core philosophical inquires. Though always seamlessly woven into the narrative, Nexus revels in daring the reader to justify their thoughts on technology beyond the confines of a black and white paradigm. The Nexus drug is aptly named in that it is the focal point for every one of the book’s big questions, none of which are particularly easy to answer.

While the novel may be driven by near-future human augmentation technology, much to the delight of futurists, all of its attempts at parsing a grand design for humanity stem from current world issues. Through skillful narrative exposition and the odd bit of character dialogue that borders on a prose soliloquy we learn that the United States revokes citizenship from people who stray too far from the Supreme Court’s definition of humanity. Moreover, the DHS, FBI, and CIA make use of warrantless surveillance and networks of unmanned drones possessing rudimentary AI. Soldiers are augmented to be more than human, but left to their own devices when the enhancements lead to cancers. All of these examples should resonate with current issues of immigration, reproductive rights, state surveillance, veterans’ affairs, and America’s various wars on terror/drugs/crime. While Mr. Naam is ever the foresight specialist in his story telling, he artfully anchors the text’s speculative and heavily scientific building blocks to readily accessible sociological challenges.

At the same time, the novel is not a technocrat’s manifesto for nanotech augmented anarchism. Despite my instinct to take up a radical banner as Kade and Rangan were interrogated and tortured (sort of) in federal custody, Naam’s writing managed to evoke some genuine sympathy for the establishment. Despite their questionable methods, the ERD and their agents are trying to protect a great majority of people from an exponential growth in technology that exists outside of their functional world views. Though it can be hard to see benevolence in the ERD’s contemporary analogues, there is a certain resonance to the ideas at hand. Digital libertarians complain about the FBI meddling with the internet, yet said agency as well as many others offer a tangible benefit to people who use the internet without holding a personal stake in how it operates. Once again, Naam skillfully mines the present to draw out logical near-future extensions of today’s issues.

As a story told from the intersection of theoretical neuroscience and contemporary geopolitical issues, Nexus is a fascinating study into how technology might inform human evolution. At times it is also a scathing commentary on the United States’ “War on Drugs” and “War on Terror”. Perhaps equally so, the novel is a critique of how ivory tower approaches to scientific progress can necessitate invasive third party oversight. Though a many headed hydra of foresight, Nexus is always thoughtful and never particularly dense or heavy handed in its prose. Indeed, there’s a near poetic quality to the way in which Mr. Naam describes the otherwise cold linkages of Axons and Dendrites within the human mind. Bearing that in mind, I would not be surprised if Nexus becomes as influential within academic and scientific quarters as it is certain to be for a more general audience.