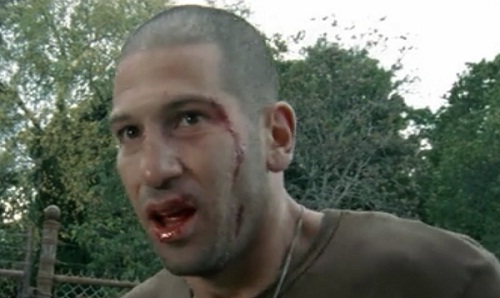 So here we are. It’s Friday, I’m still somewhat sick, and I don’t feel like reviewing the other of The Walking Dead’s second season. I mean what more needs to be said? Everything bad that happens, happens because of Carl. Most of the audience has probably forgotten about the “we’re all sick” thing from the season 1 when Rick makes his big reveal in the aftermath of leaving the farm. Glenn and Maggie have less chemistry than Padmé Amadala and Anakin Skywalker. Herschel uses the Doom code for an infinite ammo shotgun. And Laurie shits on Andrea for being the only woman in the group not bound by traditional gender roles.

Instead I want to talk about what I see to be one of the worst fight scenes ever choreographed, and a true low watermark for the series. Given that The Walking Dead attempts to highlight the practical consequences of a zombie apocalypse, this fight scene is nothing less than a middle finger to everything else the show does in the name of authenticity.

First and foremost, this fight is comically drawn out. The longest street brawl I’ve ever seen only lasted about fifteen seconds, and that was between two drunk guys who couldn’t feel anything. Unless Shane and Rick are both high on PCP, pain would have ended this fight well before the zombies got involved.

For the jury’s consideration, I’ll submit my own fight CV into evidence.

My first fight lasted less than two seconds. It was in the fourth grade when I sucker punched a guy named Kenny solar plexus. He started gasping for air, I ran home.

Fight number two ended in under five seconds. It was the fall of 1993. I was in the seventh grade and a guy named Brandon delivered unto me what must have been my hundredth charley horse. I responded by kicking him in the knee in the direction a knee does not bend. He fell to the ground and started crying. I gloated for a moment or two before running and  hiding in the bathroom.

My third and hopefully final fight happened when I was twenty. A drunk guy at a bar followed me to the bathroom and tried to sucker punch me with a drunk guy haymaker for dancing with his ex-girlfriend. I dodged. He punched the urinal and busted up his hand. I ran so fast I could have set a new record on the Kessel Run. Total time from punch to tactical retreat was less than 3 seconds.

The reality is that fights are like the Japanese attack on Pearl Harbour: one sided and with surprise as the defining factor.

Keeping that in mind, let’s break this thing down.

At 0:08 Rick tries to punch Shane in the armpit. Shane catches Rick’s arm, and then headbutts Rick. 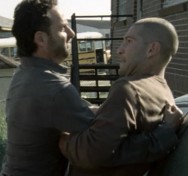 Two things: Rick’s failed punch reflects how hard it is to connect a strike with a body. Fighting is a game of accuracy, range, and technique. Blind fury does not lend itself to any of those prerequisites.

Shane’s headbutt should have been the end of the fight right then and there. A headbutt is best employed as an opening and closing salvo. If done properly, the attacker lands their forehead on the bridge of their foe’s nose, smashing the cartilage in the process. However, it’s a high risk/high reward gambit. If the attack is too high, then skull meets skull and both parties get their bell rung. Too much to the left or right and the blow glances leaving the attacker off balance and with their back to the foe.

Since Rick falls down like a sack of potatoes, we should assume Shane lands the strike. A broken nose, or even a near break, results in two things: blood, and I mean lots of blood, and uncontrollable eye watering. Rick might still have fight left in him, but if the episode’s director cared about paying attention to the limits of the human body, there’s no way Rick would be able to see, let alone hit Shane. Rick would be a blind bloody mess, and Shane would finish him with a kick to the junk.

At 0:15 Rick lands a blind backhand against Shane, (highly improbable) setting him up for two punches to Shane’s face.

Punching a person in the face is a terrible idea, even if you’re a cop. The top of the human skull is irregularly shaped and very hard. For a non-professional to punch somebody there is to toss a coin on hurting the target versus breaking their hand. Sure a good hook will rattle teeth and blur vision, but it won’t end anything and is just as likely to backfire on the person throwing the punch. It’s better to take the Vulcan salute and use it as an eye gouge than punch somebody in the head.

I’ll concede Rick and Shane likely have some training in hand to hand combat, but police tactics focus on disarming and restraining a foe. They’re much more likely to be versed in Judo style moves than boxing. So I strongly doubt if either Rick or Shane really knows how to hit a person bare handed. If they did, they’d be smart enough not to do it.

At 0:34 Rick lands four right handed body shots to Shane’s left lower mid-section. This is assuming Rick won his two back-to-back coin tosses and didn’t break his hand on Shane’s face. I don’t care how much Shane works out, four shots to the floating ribs should send the muscles in that area into spasm. This will make inhaling rather hard on Shane’s part. But without any overt difficiulty, Shane is able to shove Rick into a fire truck. Therein, Rick wins another face punch coin toss. Shane wins his first, as well, before throwing Rick to the ground.

You’ll notice at this point that nobody has so much as a scrape on their hands. One or two full power punches against a punching bag is enough to split a knuckle. Rick’s thrown seven with his right and he could still be a hand model. 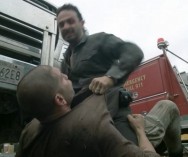 At 0:50 Shane rolls a police motorcycle on to Rick’s leg. According to Harley-Davidson a 2013 Road King CVO motorcycle weighs 380 kilograms when in riding condition. I don’t know if that’s the exact make and model seen in the video, but I’m told various police forces in North America and Europe regularly employ the Road King. That’s a lot of weight coming down on Rick’s leg(s), yet he walks away from it without so much as a sprained ankle. In fact, Rick walks away from it so well he’s able to charge Shane and bulldog him to the ground. Clearly good luck skips a generation in the Grimes men; how else can we account for Carl as a perpetual albatross?

The boys tussle a bit more before Rick lays three more right hooks on Shane’s face at 1:30. Note the juicy sound effects as Rick lands the second and third blow. Our video ends here, but the scene finishes with Shane rolling around in pain (finally), Rick laying down an ultimatum, and Shane responding to Rick’s dictum by throwing a wrench at his best friend’s head– he misses. When next we see Rick’s right hand, a hand that has bloodied Shane’s mouth yet somehow avoided breaking any of Shane’s teeth, it’s as clean as anything.

Bullshit, utter bullshit. Leaving everything else aside (wresting, off camera punching, hits to the body) the odds of Rick walking away from that fight without breaking his hand are at the very least 1:26. Putting it another way, if Shane’s face is messed up enough to make him look like a walker after a light lunch, Rick’s hand should be proportionately battered.

So forget about Herschel and his magic shotgun, if there’s one big thing to laugh at in season 2 of The Walking Dead, it’s Rick Grimes and his Mike Tyson’s Punch Out magic hands.