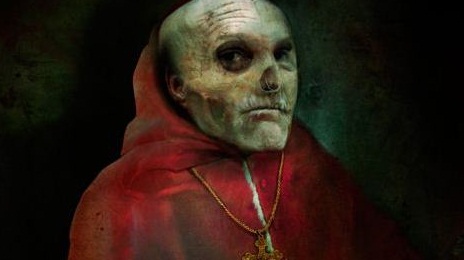 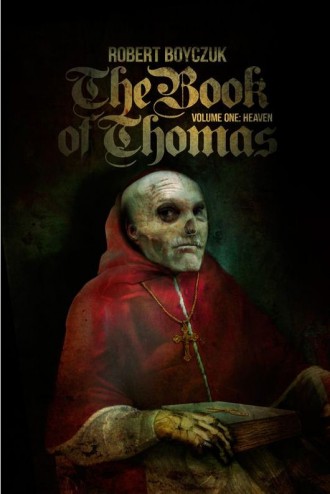 To explore the first volume of Robert Boyczuk’s new series, The Book of Thomas, I think it is necessary to begin in the middle of the story. Therein, an orphan boy with eidetic memory makes a meta commentary on the novel as a medium. In reflecting on a world where the Church has banned all books save the Bible, Thomas says, “The novels I read…contained an idealization of truth. In real life, the truths are still there, but they are never quite so clear.” As I read those words, I pondered what truths Mr. Boyczuk was attempting to idealize within this novel. Thomas, as both protagonist and narrator, is witness to a world filled with murder, corruption, impiety, and the reduction of science to Jesuit oral history. Of course, truth is a tricky thing, particularly in a novel which seems to take pleasure in wholesale subversion.

In some ways, The Book of Thomas puts me in mind of another CZP book, James Marshall’s Ninja Versus Pirate Featuring Zombies. If the trajectory of these books were graphed on to a Cartesian plane, they would likely emerge as parallel lines albeit with a vast distance between them. Boyzcuk modifies the Aristotelian model of the universe to create a “planet” of many concentric spheres as a setting for his story – Hell being the innermost sphere and Heaven the outermost. He then installs the Catholic Church as the governing power of this purportedly pious but ultimately decadent and decaying world. And just so the reader knows Mr. Boyzcuk is serious in his deconstruction/appropriation, pederasty, persecution, and rape abound in the book’s first chapters – all of which can be blamed squarely on the various institutions of Catholicism. Despite this, the novel rarely preaches. Thomas, through his perfect memory, is a fair narrator. He recognizes is own sins as readily as he does those of others. And though it may seem like The Book of Thomas is subversion for its own sake, its methodology quickly becomes a mechanism for approaching the heroic epic without placing the narrative inside an idealized world of objective good and evil.

Though gifted with characteristics and history suitable to a heroic character, guilt, shame, and obligation inform Thomas’ quest. In this Thomas knows he will likely never find absolution for his misdeeds. Despite this knowledge, and a form of ironic self-flagellation which would put the best Greek poet to shame, Thomas embraces the hero’s journey. His voyage creates a delightful contrast in the duality of man as a creature of equal parts free will and determinism.

Further shading the non-idealized epic tradition is Boyczuk’s treatment of the characters essential to Thomas’ world. Clever nomenclature alludes to their roles within the story: Kite, Thomas’ shield, who like all shields will eventually break; Ali, the leader, who drives Thomas while himself being led by other powers; Meussin, the Pope’s illegitimate daughter, who embodies both sin and truth in equal measures. None of these characters have simple motivations or a trope driven nature which might lend to quick critical dissection. There’s a brilliant ambiguity to the players, which returns to Thomas’ meta discussion on novels and life; wherein literature streamlines the divergent demands of readers and writers into digestible packages. Only in this novel, the complexities of life and people are fully imposed upon the heroic journey.

The novel’s pace is another element contributing to its nature as a contemporary subversion of the epic. Much of the volume is bound up in Thomas’ journey from a lower sphere to Heaven. While there are many questions and conflicts within this sojourn, a grand sense of narrative only emerges in the final pages of the book. So yes, there is a lot of world building in The Book of Thomas, but it is a gorgeous world to behold. The Spheres of the Apostles are byzantine, flawed, and utterly beautiful. In his dialogue and narration alike, Boyczuk’s remarkable use of language hangs on the border of anachronism, serving to remove the reader from our world and fixing them upon the firmament of a sphere.

There is one possible point of contention I would deal with before wrapping up the review. To do so constitutes a very light spoiler; I apologize in advance. Still, I feel it necessary to discuss a particular rape scene within the novel. My first impression of this scene was that it was too matter of fact. It felt like a pulled punch for the sake of narrative convenience. Each time the story returned to the rape as a formative event within Thomas’ journey, I felt it to be a cop out which cheapened both of the involved characters. About 150 pages later (a guess as I read the book on my kindle) the book reveals certain details that, to my mind, wholly justified why this rape scene had to happen. Indeed the revelation drove home just how little personal agency there is within both a theocracy and Boyczuk’s preternatural world. So to those who approach this scene with some reservation, have faith that it is essential to the art of the story.

In a novel that dedicates so much of its efforts to framing a larger tale, the simplest benchmark for success is a reader’s desire to keep reading after the last page. To Robert Boyczuk I now say, “I want more.” The Book of Thomas’ first volume is as layered as the world in which it is set. A subtext of critical skepticism juxtaposed with deist belief in a higher power underpins a story which shamelessly and unrepentantly flirts with multiple genres. Ultimately this combination of opposing thematic forces produces a novel which frees the hero’s journey from idealism and infallibility, offering something that is, perhaps, closer to the Truth of those called to greatness.

The Book of Thomas, Volume 1: Heaven by Robert Boyczuk.