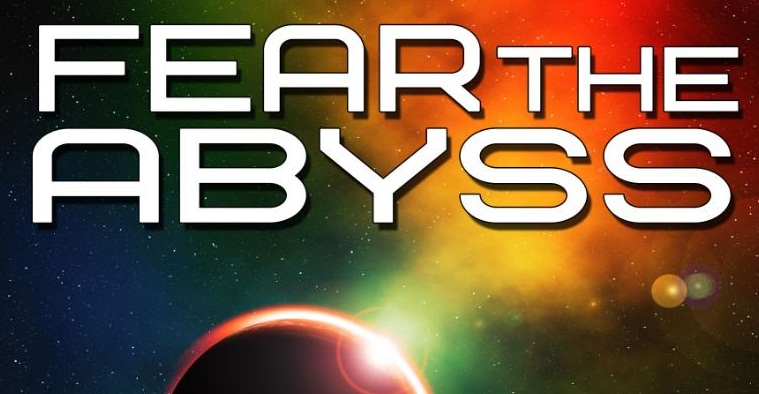 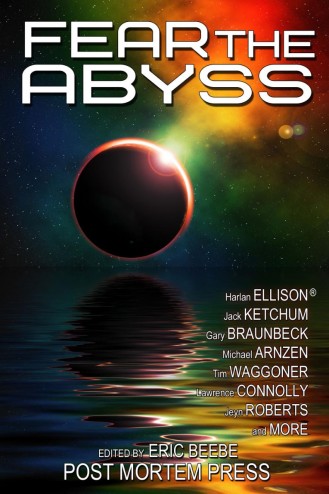 In his introduction to Fear the Abyss, an anthology of dark horror and science fiction from Post Mortem Press, editor Eric Beebe asks, “What is more frightening than an unending unknown?” To answer this question, twenty-two authors present a variety of narrative insights into the relationship between curiosity’s call and the anxieties of discovery.

While these stories are well suited to the editor’s thematic mandate of exploring the science, knowledge, and fear, I believe another concept unites these stories. Almost all the fiction within Fear the Abyss probes the actual act of perception, be it visual, psychic, or something else, as both a reaction to and a means of comprehending the unknown. The tones of pessimism, nihilism, and, in a few cases, optimism which materialize out of these stories speak not simply to the construction of an imagined unknown, but how readily identifiable characters process that which is alien to them. Though the range of sub-genres is broad, from outright body horror to far-future science fiction, the experience is quite cohesive.

Certain stories live on in a person’s memory long after they have been read. Extraction is not one of those stories. Rather, Extraction is the story that gives nightmares to all the other stories which keep a person up at night. Beginning with the phrase “I can’t stop jerking off at work,” what follows is an evocative piece of short fiction, dwelling in the cracks between body horror and contemporary science fiction.

It naturally follows that McHugh’s text is somewhat challenging to read. In exploring a literal form of human alienation, the story risks evoking a particularly sour taste from the reader. For me, the experience prompted equal measures of repulsion and fascination, akin to the first time I watched Hellraiser. Throughout the text, motifs of desire and addiction collide in what is quite rightly a reproductive grotesquery. Unsettling as the imagery may be, it’s not exploitative so much as an attempt to relocate the reader from a safe conceptual realm into a place where any pop culture preconceptions of the fantastic are stripped away. The remnant is a vision of reality which frames the great “other” as something genuinely horrifying to behold.

That Which Does Not Kill You by Matt Moore

Matt Moore offers a near-future war story that blends the best elements of Shelley’s Frankenstein and Philip K. Dick’s A Scanner Darkly. Though there are some aspects of body horror in the story, its raison d’etre seems to be an inquiry into the consequences of denying agency to its two central characters. A number of interesting questions emerge out of this denial of control. Should we have to confront the horrors of our world if there is an escape at hand? At what point do we accept our circumstances rather than trying to work around them?

There’s also a strong juxtaposition between the characters’ inner conflict and the war going on around them. It’s an almost MASH like quality which sees the grand questions of the war ignored. Instead, the story focuses on the war’s casualties, in both physical and psychological terms. In shining just enough light on battlefield apparati to avoid being bogged down in back story, That Which Does Not Kill You showcases the cheapness of life and death in a war where soldiers are adjuncts to military hardware.

The American by S.C. Hayden

I have been waiting for a story like The American for as long as long as I’ve been genre fiction. To me, there’s nothing more tiring than stories which try to shock me with the battle for Heaven as waged on contemporary Earth. We’ve all seen The Exorcist, and most everything that has followed after that, regardless of medium, has been variations on the theme. Moreover, stories of demonic possession often presume too heavily upon the audience’s ability to be moved by the Judeo-Christian legacy.

The American begins as a deceptively derivative story about demonic possession. And then with one perfectly placed knock-out paragraph, which can not be discussed without moving into the realm of spoiling, it takes a tired trope of Christian pseudo-mysticism and places it firmly within a post-modern context. It’s short, smart, and manages to double down on subversion in a genre niche which is firmly rooted in ignorance and superstition.

Life After Dead by Jeyn Roberts

Anytime a writer does something different with zombies, I’m going to pay attention. Though unique in its own right, there are echoes of Cormac McCarthy’s The Road within Life After Dead. Post zombie Vancouver is a bleak and desolate place. The heady thrill of immediate survival, as seen in so many zombie stories/films, has given way to resource scarcity and a profound existential void. The survivors are forced to reconcile their continued existence with the reality that modern city dwellers don’t know how to do anything when it comes to survival in the purest sense of the word.

Now if this story only worked with the above mentioned elements, it would likely still be doing enough to land on my honour roll. The mid-story transformation, however, really makes Life After Dead stand out from the horde. It’s a common enough thing to see a zombie apocalypse survivor putting down an infected loved one; the bio-political struggle between monster and sickie is pretty much standard fare in a post World War Z world. Rather than peeling away another layer of that onion, Roberts’ inverts the format. The result is unexpected and emotionally resonant. A survival narrative morphs into a story about love, and love is rarely handled with such adroit among the undead.

What We Found by Andrew Nienaber

When a writer frames a story around the question “Are we alone,” the answer is almost always yes; I call it the Sagan Doctrine. Answering one of science fiction’s most holy questions with a definitive negative invites not only the wrath of optimistic readers but also opens the door to fundamental questions about the purpose of the narrative itself. Through a survivor’s final words for a future that may never come, Mr. Nienaber imagines the psychological, as well as practical, consequences of terrestrial life as a cosmic accident.

The emerging story is simultaneously a commentary on the ever present isolation and dread of urban life, as well as a thought experiment on humans as creatures of hope. If humanity was confronted with absolute knowledge of our loneliness in the cosmos, would that realisation become a viral meme capable of flaying the humanity out of those who come in contact with it? Could we, as a people who strive to greater and greater heights, cope with a universe beholden unto ourselves? It is a troubling question, but one relevant to a world which pushes the frontiers of astronomy and quantum physics with each passing year.

A Box of Candy by Nelson W. Pyles: A classic ghost tale focused through the lens of Quentin Tarantino style revenge.

Broken Promises by Jamie Lackey: My first thoughts after reading: this is what Prometheus should have been.

Of the twenty-two stories contained within Fear the Abyss, there were only five which didn’t strike some sort of meaningful chord with me. The writers mobilize a broad range of styles and genres to plumb the depths of fear, knowledge, and perception. Would that The Outer Limits were reborn on HBO, freed from the conservatism of network television, I expect its first season would look something like Fear the Abyss.