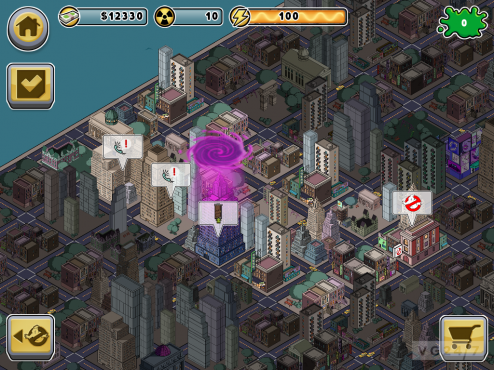 Approaching Beeline Interactive’s Ghostbusters on the iOS unites two faint hopes for this critic. The first hope, which the game summarily dashes, is that somebody might finally give fans of 1984’s Ghostbusters a game worthy of the franchise. My other perpetual desire, equally shat upon by Ghostbusters, is that a developer might find a way to elevate “free to play” games into something which do more than exploit brain hacks for profit.

Like all “free to play” games, the devil of Ghostbusters is in the details. For the first few minutes, the game isn’t bad. Do you remember Scott from the original Ghostbusters movie? Scott’s the possibly psychic guy who Bill Murray repeatedly shocked for three hours as a means of getting a blonde co-ed in the sack. Well Scott, aided by a mysterious ghostly figure, is out for some revenge against Peter Venkman and island of Manhattan.

Things start to go wrong when Ghostbusters oh-so-subtly reveals that anybody intent on playing the game for free will not be playing as one of the real Ghostbusters. Unlocking either Peter, Ray, Egon, or Winston will cost five dollars. Unless would-be busters are will to shell out twenty dollars for an actual Ghostbusters experience, be prepared to spend your time controlling Michelle Ying, Egon’s anime haired half-step-niece, Tara Fitzpatrick, a generic smart girl, and Michael Prince, a younger Winston who boasts “a MBA in Business”.

Hey, writers at Beeline, the department of redundancy department is on the phone, and they want to talk to you.

Seriously though, if I wanted fake Ghostbusters, I’d just go watch that 80s cartoon, based on the 70s TV show where Abbott and Costello team up with Dr. Zaius to investigate the paranormal.

Even if die hard devotees are willing to spend a fin to unlock their favourite Ghostbuster, they’re not going to find much substance in the actual game play. Assuming a person can endure an endless loop of Elmer Bernstein’s Ghostbusters Main Title Theme, the game breaks down into two parts. The main story requires players to collect slime, yes I said slime, so they can unslime the stairwells of a fifty floor building where Scott and the big bad have taken up residence. To collect slime a would-be buster responds to calls throughout Manhattan. And before you get excited at the prospect of trapping some class five free formed vaporous apparitions, the game’s ghosts are some of the most uninspired creations, ever. So far I’ve busted ghost rats, ghost guys in a hospital gowns, ghost football players, and ghost cheerleaders. This stinks of Beeline recycling sprites from their other games. I’m not expecting a Golgothan Shit Monster, but something that actually resembles a ghost might not be too much of a stretch for the Ghostbusters.

Then there’s the gameplay, itself. In short, it’s the sort of experience suitable for a nine year old recovering from a frontal lobotomy. When a ghost comes on the screen, the player draws a line from buster to phantasm. The selected ghostbuster will then attack the ghost with either a proton pack, slime blower, or magic healing gun which doubles as a proton pack. Once the ghost is worn down, players must tap the trap button. Rinse and repeat from six to a dozen times per level. When the slime threshold is met, the team uses the anti-slime (or whatever the hell it’s called) to remove the slime in the hotel and move up another level. Once there, they unlock some upgrades and find out their next slime quota.

And so it goes.

Let’s review. Beeline has taken this…

…and turned it into a game of connect the very slowly moving dots. Super fun. Rarely do I look at a modern game and think to myself, “Man I miss the Atari 2600 version.” At least that one required some finesse to catch the slimers.

But wait, there’s more. Ghostbusters comes with all the hallmarks of a bad facebook game circa 2008. Player actions are subject to “energy” which requires real time to refill (unless you want to pay to get more time). Upgrades require hours to research, as well as non-premium in-game currency, as to ensure cheapskates among the audience feel suitably motivated to part coin from hand for instant gratification. It’s all the tedium, push notifications, and skinner boxing a person could expect from something “free”, only now the formula is being applied to my much beloved Ghostbusters. It’s a punch in the stomach to the fans, old and young, who deserve better than this exploitation of brand recognition.

In the end, Ghostbusters iOS is tired and derivative affair. It smacks of lazy game design and unrepentant appropriation. Though I suppose there is some level of meta-irony in play as Peter Venkman was the first in line to squeeze money out of unwitting rubes. Regardless, Beeline Interactive can consider me their Walter Peck, because if I had things my way I would shut this whole game down.