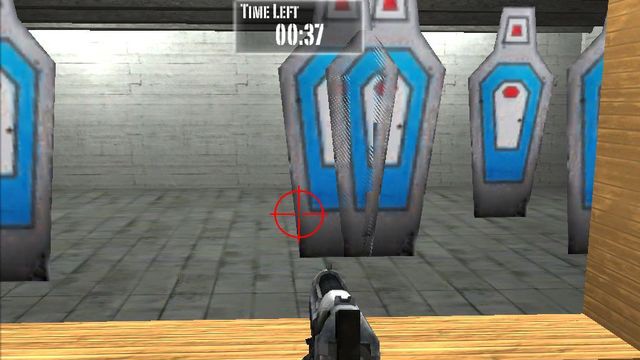 As fans of BioWare’s Mass Effect series know, indoctrination is an ugly word. Prior to gaining a Reaper related pop culture meaning, indoctrination was often used in the same sentence as fringe cults, militias comprised of child soldiers, and organizations known for mobilizing hate in the name of eugenics and social “reform”.

So let’s put a pin in the fact that the NRA’s Practice Range iOS game is nothing but a shameless attempt at indoctrination from America’s “legitimate” gun culture; the self-same gun culture which proclaims the right to own an M-16 is somehow protected under a constitution which predates the wholesale adoption of indoor plumbing by about sixty years.

I suppose I should also put a pin in any discussion on the high irony of the NRA releasing a shooting game when the organisation’s Vice President recently referred to the game industry as “…a callous, corrupt and corrupting shadow industry that sells and stows violence against its own people.”

And even if I am being over dramatic in labeling NRA Practice Range as indoctrination, it’s hard to see the game as anything other than an attempt to normalize the “legitimate” role of the NRA within American society. Case in point, during the game’s oddly extensive loading screens Practice Range offers fun facts about the history of the NRA, as well as pro-tips for gun safety. I like number 8,

“Never use alcohol or drugs before or while shooting.”

Clearly there is some sort of educational/promotional agenda at hand. Yet no amount of warm fuzzy feelings on the topic of responsible gun ownership/use can make up for the fact that this game is absolutely abysmal. Indeed the half-cocked nature of Practice Range smacks of rushed spin doctoring rather than any sort of genuine attempt to build bridges with gamers (or their parents) receptive to the NRA’s ideology.

Practice Range offers three modes of play: indoor range, outdoor range, and skeet shooting. In theory the game makes use of iDevice gyroscopes to set cross hairs over various targets. The problem is that there is no way to calibrate the game to a device’s natural orientation. Even when I launched the app and navigated its sluggish menus with my iPhone at an ideal playing position, I still had to make the screen near to parallel to the floor before my gun would aim up or down. Attempting to play the game with analog controls is no better. The aiming control is utterly clumsy, and there is a noticeable lag between tapping the fire button and the gun actually doing something.

And despite all the game’s pretensions otherwise, I do not see how an M-16 is an appropriate outdoor range gun.

If the game alone were not enough of a public black eye for the NRA, so much so that I expect it will probably be pulled from the app store before long, NRA Practice Range goes so far as to adopt the much loathed business model of micro-transactions. Hey, National Rifle Associaiton, here’s a pro-tip for you in case you ever make another sortie into edutaining the masses: the message may be better received if it isn’t partnered with shameless attempts at making a cheap buck. If this app truly is an exercise in damage control, then the sheer chutzpah of monetizing it is almost beyond description.

Amid constant crashes, a level of sluggishness befitting overweight house cats, and a pointlessness to the game play which in any other circumstance would rightly abjure its own existence, NRA Practice Range is among the worst apps ever released for the iOS. No amount of irony, curiosity (morbid or otherwise), or whimsy should necessitate downloading this game. Even as a means of mobilizing gaming as a tool for outreach, NRA Practice Range has all the charm of a bad Human Resources training video. I regret the bandwidth spent on downloading this game, and the time invested in playing it. And try as I might, I can only imagine chumps and true believers spending  .99 cents here and there to unlock various content for this mobile propaganda platform.

On the up side, given the ease with which “range” can be typo’d into “rage”, I expect it is only a matter of time before subversive derivative works appear on the app store.