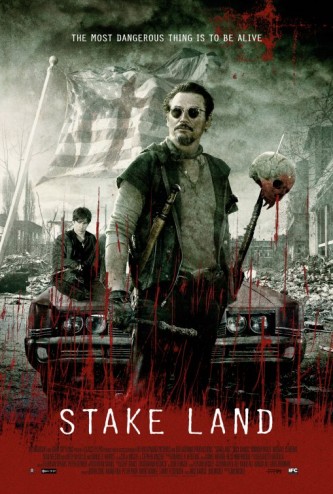 Stake Land first appeared on my cultural radar in the most inauspicious of ways. I saw banner ads promoting the movie floating about the Battlestar Galactica Online home page for about three days. When the ads disappeared, I forgot about the movie. Recently, it made an equally stealthy appearance on Netflix, so I thought why not check it out. Its description, however, invited some trepidation on my part.

“This genre-bending thriller combines vampires, religious fanatics and post-apocalyptic horrors with a coming-of-age tale that finds drifter Mister training young Martin to survive the nightmare that has become America as they journey to New Eden.”

Say the words “Vampire Apocalypse” out loud and tell me you don’t wince at the sound of your own voice. You should. And if you don’t, I don’t know if we can still be friends.

Make no mistake, I appreciate a good annihilation fantasy as much as the next person. Yet a shuffling of the monsters within the cinematic trope has to be sign that this particular genre niche is running on vapours. Despite this, and some incidental similarities in nomenclature and format to 2009’s Zombieland, Stake Land manages to turn out a reasonably unique take on the post-apocalyptic monster story.

Stake Land’s best selling feature is its realization that post-apocalyptic movies are the figurative bull in a china shop. The narrative must be violent and convulsive but not so much so that it shatters the audience’s tentative acquiesce to the end of the world; I’m looking at you, Rolland Emmerich.

We want the bull to break things so long as it doesn’t bring the roof down on our heads. Stake Land executes a few gambits to achieve this task. Even though Mister (Nick Damici) exudes a gruff and cold exterior, his dialogue and actions steer clear of the grumpy hero clichés. His protégée Martin (Connor Paolo), whose name I actually forgot because Mister only ever addresses him as “boy”, is not the dough-eyed neophyte whose misadventures drive the plot. The two are survivors, each dependent upon the other for purpose and protection. Beyond that, Damici and Paolo’s well placed scenes of “Stake Jitsu” training manage to evoke a Mr. Miyagi and Daniel-san style of relationship. Routine as the relationship between the two characters may be, it is all but forged in silence, allowing the audience to shade the protagonists as they will.

When Martin and Mister come across additional survivors, the writing is smart enough to avoid any of the big apocalypse clichés: we can’t trust strangers; we can’t take them with us; somebody in the group is infected; and Sexe Diem, which is (fake) Latin for, “It’s the end of the world; we might die tomorrow, so let’s bang.” Though Mister’s reputation as a hunter lands him no shortage of action when the two call upon various free city states, the sex is always off camera. More importantly, there’s no clumsy romantic sub-plot for Martin.

Oh and it should go without saying that there’s no sex with vampires, no sparkling vampires, and no misunderstood vampires who want to atone for past deeds. The blood suckers range from semi-sentient to outright feral and their sole motivation is to feed on warm bodies.

How odd that annotating all the things the movie doesn’t do almost encapsulates a review in and of itself.

In terms of story, Stake Land is at its best when examining humanity as its own worst enemy. Yeah, I know, Battlestar Galactica and The Road pretty much wrote the book on that particular post-apocalypse motif. Still, Stake Land’s use of religion to explore this theme is rightly satisfying.

Amid the ruin of America a religious sect called “The Brotherhood” controls much of the hinterlands between pockets of civilization. The Brotherhood believes the vampires to be god’s means of cleansing the Earth of the impure and unworthy. Though firmly Christian in origin, they are not beyond loading a truck with vampires and ramming it into the gates of a city state, thus unleashing some divine vengeance.

Yet the religious themes do more than vilify the story’s human antagonists. One of the first survivors Mister and Martin come across is a nun known only as Sister (Kelly McGillis). It would be all too easy to turn Sister into a “god has a plan” sort of bible thumper. Instead, she symbolically carries, and perhaps compartmentalizes, her faith in her pocket in the form of a figurine of the Virgin Mary; however Sister also picks up a gun to defend their group. She, like Mister and Martin, embody compassion within a broken world.

This is where Stake Land really delivers as a post-apocalyptic movie. Compassion is regularly the first victim of this genre. What better way for a director to show the end of the world than to end any sense of obligation from one person to another. Keeping a sense of loosely chivalrous heroism, violent and visceral as it may be, about the POV character and his mentor defies the audience’s expectations about this type of story. Martin and Mister become easily identifiable to the audience without sacrificing any of the plot’s high stakes.

On a technical level, Stake Land makes excellent use of its modest budget. External shots in heavily wooded rural areas effectively build a ruined world for free. The camera work is steady enough to convey a grand sense of location and isolation, but never dwells on the setting as a means of filling time. Fight sequences between the hunters and vampires are fast and brutal, as befitting an actual fight. The make-up and gore on the vampires is as good anything one would expect from a big budget production. My only real complaint is that the director’s effort to show Mister and Martin’s professional detachment left the final vampire battle sequence rather understated. In fact, Martin’s “graduation” to full hunter is a blink and miss it moment. A few extra seconds of camera work here and there would have contributed so much more emotion to these important scenes.

Strong as Stake Land may be, it wasn’t the movie to redefine the sub-genre in 2010 nor shall it do so today. What it does prove is a high level of technical and storytelling proficiency from director and co-writer Jim Mickle. While not quite as cerebral as something like The Road, Stake Land proves that there is room to improve the formula within the supernatural post-apocalyptic genre.