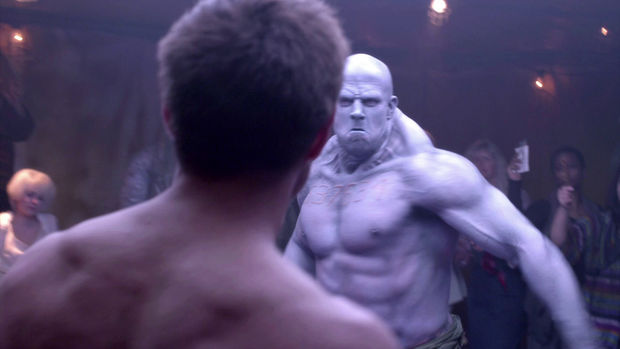 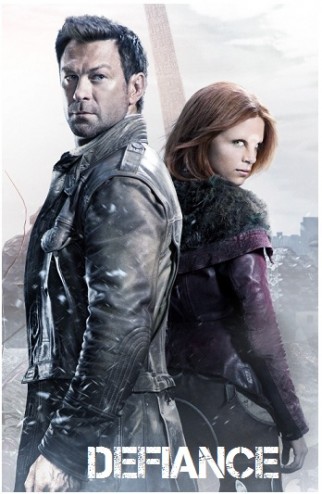 A few days ago my friend Will and I were talking about the upcoming SyFy original series Defiance. When we began speculating on why SyFy would opt for a transmedia approach to Defiance, releasing both the TV series and a tie-in video game at the same time, we defaulted to snark. “They like money, that’s why.”

But what if there is more to Defiance than a shameless cash grab?

Premise: The management at SyFy recognizes that their original programming (movies not withstanding) has more critical appeal than popular. Consider the recently cancelled superhero series Alphas as people’s exhibit A.

Exhibit B: The most recent trailer for Defiance (the series).

Assuming the trailer is an honest representation of the show, Defiance seems like the perfect series to win over critics. An alien channels Tony Soprano with his Mafioso rationalization, “I’m doing this for my children.” A single line of dialogue from Graham Greene manages to bring the entire conceptual framework of indigenous rights into a science fiction setting. What sort of savvy media consumer wouldn’t pay attention to the poignancy of having a native American actor paint humanity at large as a marginalized people in the face of a technologically superior colonial power? At the same time, I’m not so delusional to think that near future alien-human politics is universally appealing; we learned that lesson from Babylon 5. It sounds to me like Defiance is the perfect sort of show to win over critics while boring the broader audience with its weekly discussions of individual rights versus the collective good. Hey, I think we just re-invented Outcasts.

Other than the name and SyFy branding, is there anything to indicate these two things are related? The series looks like Mad Max meets Firefly featuring Farscape; whereas the game channels Lost Planet and Mass Effect. Even the cover girl for Defiance projects a FemShep vibe.

When we peel back the layers on Defiance’s video game it further seems to be positioning itself as an amalgam of everything that is popular in gaming.

“Join the futuristic online open-world shooter where thousands of players scour a transformed Earth competing for alien technology. Hunt alone or with others as you improve your skills and level up, unlocking powerful weapons that will help you survive the massive battles that await.”

So there’s the Borderlands franchise covered with just a hint of Planetside tossed into the fray.

“Experience dynamic missions, massive co-op battles, and endless exploration across a gigantic game environment. Plus, brought to you by Syfy, the Defiance TV series is a revolutionary weekly drama that impacts the game, and gives you the chance to change the show.”

Play the game, and change the show. Wasn’t that the slogan for Heroes’ terrible third season? Considering the game is set in San Francisco and the series in St. Louis, I expect the changes will probably be of the blink-and-miss-it variety. Otherwise, SyFy had best be prepared for a whole lot of 4chan inspired trolling.

This combination of television and gaming amounts to an interesting gamble on the part of SyFy. On a cable channel where a few hundred thousand viewers can make the difference between renewal and cancellation, a cross branded video game might just be enough to bring in an audience for a show which already looks to draw on conceptual themes from other one season wonders.

The down side of gambling is that the consequences can often be ugly. Case in point, it would not take much to turn Defiance into Captain Power and the Soldiers of the Future. Shitty light gun games built into Captain Power’s action sequences doomed an otherwise well written series after one season. If Defiance (the game) is anything but a masterpiece it’s going to make the show look bad in the eyes of gamers. And at a $60 price point – $100 for the deluxe edition – god help the series and everybody who works on it if the game turns out to be a turd. If SyFy thinks it has an image problem for its dedication to low cost reality TV and syndicated wrestling, imagine how bad it will get when the internet accuses the network of pandering to/plagiarizing from A-list of video games as a means of raising capital. The same problem emerges if the show is garbage and the game is great; TV wonks could accuse SyFy of throwing a series under the bus to leverage itself into the video game market. Though if SyFy was intent on making a fast buck they would have revisited the free to play model of Battlestar Galactica Online.

Whatever else it is, it’s hard to see Defiance’s transmedia experiment as anything but an all-in bet. Both the game and the series need to resonate with their respective audiences while also seeing some of the game’s following tune into the show. It’s a risky proposition on all fronts, but if it works Defiance could be at the forefront of a new evolution in genre entertainment. At the very least, April will see a renewed discussion in the ongoing “video games as art” debate.