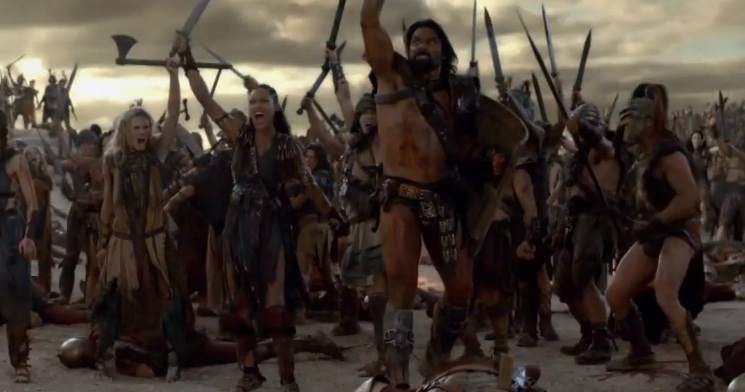 Hail, Spartacus, premium cable welcomes your return. And welcome back to the Page of Reviews, TV Mondays. So here’s how we are going to do it this year: more focus on critical discussion and less on recapping the episode. I don’t get paid enough to burn 1500+ words on recapping something when I can have more fun praising, or demolishing, its larger themes. So let us turn thought to action and put fingers to keyboard.

Since the bloodbath that was the end of Spartacus Vengeance our eponymous Thracian’s rabble has grown into a proper army. The newly freed men and women have taken to terrorizing Italy, liberating villa slaves and mine labourers alike. The Senate, overstretched through foreign wars, commissions the richest man in Rome, Marcus Licinius Crassus (Simon Merrells – who bears a striking resemblance to Christoper Eccelston) to raise an army of 10,000 men. Their plan is to crush Spartacus’ army between two forces. Spartacus must now deal with this new external threat while managing the logistics of an army provisioned solely on plunder and forage.

McIntyre Large and In Charge

Last season was an odd one for series lead Liam McIntyre. The then twenty-nine year old actor walked into a Dick Sargent/Dick York switcheroo in the wake of Andy Whitfield’s untimely passing. While McIntyre’s confidence seemed to grow from week to week, it always felt like the writers were keeping him on a leash. Nine times out of ten Spartacus only spoke to deliver a rousing speech about freedom and sacrifice. It felt as if both McIntyre and the writers were trying to balance character consistency with a respect for Whitfiled’s legacy. If Enemies of Rome demonstrates anything, it’s that McIntyre has come into his own as Spartacus.

Though McIntyre sees no short supply of hack and slash action in this episode, Spartacus’ dialogue is focused on the burdens of command. There’s no way to monologue a General out of having to manage his supply train when soldiers and camp followers alike are reduced to eating festering horse guts. The change facilitates this Spartacus interacting with the common man as Kirk Douglas’ Spartacus did in the film’s second act. This is probably a good thing for McIntyre’s future performances. Where last year McIntyre had to inhabit Whitfield’s Spartacus, while gradually making the character his own, he’s now free to draw inspiration from the man who wrote the book on Spartacus as a fictional character.

To wear a toga in Starz’ Spartacus is to revel in hubris…and orgies. A bloated sense of self-importance (and likely an off camera case of the clap) has been the downfall of every major antagonist. In Crassus, however, Spartacus has finally found a worthy foe. Batiatus was an up-jumped lanista with delusions of political office. Though Glaber was a Roman of rank, his title had more to do with his marriage to Ilithyia than personal merit or connections. Crassus, however, knows himself and his powerful station in Rome. Despite this, he spends hours each day training with a former champion of the arena so that he might better know his enemy. When Crassus’ son says that a Roman stands above a slave in all things, Crassus tosses the brat a sword and lets him stand forth for a lesson in humility. For Crassus, the psychology of a champion and a patriotic Roman are one and the same.

It’s a fascinating course change given the series ongoing Upstairs Downstairs-ish investigation of Romans and their slaves. Spartacus himself says that underestimating the enemy is a Roman trait, and arguably the reason why the slaves have been able to do so well in their war. In treating Spartacus as a General, rather than an arena rat, Crassus removes the slave army’s best advantage against the republic.

Since I mentioned Upstairs Downstairs…

When Spartacus Vengeance moved out of the ludus and into Capua and its surrounding hinterland, the series lost its most meaningful way of bringing slaves and Romans together. Sure Ashur and Oenomaus were still hanging about, but they hardly filled in for the microcosm of slave culture as seen in the series’ first season. Moreover, personal intrigues, rather than grand political ones, demanded the Roman side of the story remain centered in Capua’s petty machinations. Of course, all of that could have been avoided if they hadn’t killed off Batiatus.

Enemies of Rome finally brings about a change in perspective which restores the Upstairs Downstairs element of the series. Rome is resplendent in its glory. The character focus is fully entrenched in the business of Senators, Praetors, Consuls, and Tribunes. In stark opposition to this civility is the rebel camp. Children run through mud puddles in bare feet. Men and women alike walk around in tattered rags and fetish attire for want of anything else to wear. While comparing this new tone to something along the lines of HBO’s Rome might be a little over generous to Spartacus, Gannicus’ (Dustin Clare) drunken orgy can attest to that, there’s an obvious high stakes, high politics shift to the story. In many ways this change makes an entire season’s worth of conflict against Praetor Glaber seem like an appetizer for the real story of Spartacus.

On Men and Legends

If a single theme emerges out of the rebel army, it’s the relationship between a man and the idea of a man. Discussions with Nassir (Pana Hema-Taylor), Agron (Dan Feuerriegel), and post-coital Gannicus show that people are following Spartacus because of the legend of the “Bringer of Rain and Breaker of Chains”, not because of any particular tactical genius on his part. Indeed, Gannicus quite rightly calls Spartacus on the fact that he has no end-game to his crusade against Rome. This begs the question, will Spartacus shift from idealism to pragmatism? Kirk Douglas’ Spartacus pillaged and liberated as a means of buying ships to flee from Italy. Whitfield/McIntyre’s Spartacus rages against an institution. We all know how the story ends, but the route it takes to get Spartacus up on the cross is what matters.

War of the Damned’s very first scene screams, “Look at us! We’ve tripled our production budget!” Romans on horseback, scads of extras, and gratuitous blood splatters further drive home the fact that the series finally has some decent money behind each episode. Yet the ability of Roman swords to cleave head from neck in a single strike, though gloriously gory and theatrical, is a bit over the top. Unless Rome discovered Valyrian steel, the chances of a gladius, whose primary use was for thrusting rather than slashing, cleaving off heads left, right, and center are slim to none.

Evaluating an episode of Spartacus often comes down to counting the frequency and depravity of its sex scenes. Though Gannicus’ scene, complete with obligatory girl on girl action, ranked about a 7.0 on the series adjusted Richter scale, it was the only one of the episode. The main focus was split between introducing Crassus as an honourable foe for Spartacus and demonstrating the practical, rather than tactical, problems facing Spartacus’ army. Grand questions on the dangers of a leader becoming bigger than his ideals are asked, but left to fester in the minds of character and audience alike. As series openers go, Enemies of Rome is fantastic. It is instantly one of the high points of the series. Now let’s hope the momentum carries forward from here.