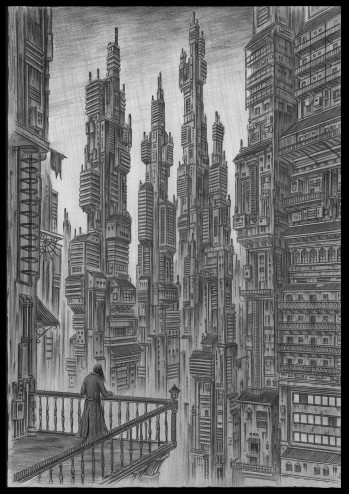 I’ve been an on-again off-again reader of Daily Science Fiction for the last year or so. While I have always appreciated their offerings, I only recently signed up for their story-a-day subscription service. After enjoying two weeks worth of stories mixed in with my morning coffee, I’m left wondering why I waited so long to subscribe. Even when a DSF story fails to resonate with me as a reader, the critic in me finds it impossible to dismiss the quality of the prose, not to mention the editorial variety that founders/publishers/editors Michelle-Lee Barasso and Jonathan Laden offer on a day-to-day basis.

In that light, I thought I would hide from my ever growing TBR pile and review a week’s worth of DSF short stories.

Image via: jflaxman on DeviantArt

For the People by Ronald D. Ferguson

For the People is a near-future politically themed dystopia, likely representing the worst nightmares of American Tea Partiers and their ilk. The story struck me as a combination of something drawn from Heinlein’s Revolt in 2100 cycle paired with a splash of Hideo Kojima’s Metal Gear Solid “Patriot” mythos.

It’s particularly interesting to see how this story explores the line between domestic terrorists and freedom fighters. While hardly a new discussion, Ferguson’s story is quite striking in its attempt to portray the terrorist as a powerless pawn in a larger game. Moreover, elements of horror manage to add an unexpected level of humanity to the main character. Though I anticipated the ending, I don’t think the author is making any serious attempt to dissemble on his denouement. The delivery is strong, the prose is evocative, and the underlying subtext on the dysfunctional elements of American government is not lost on this reader.

The Needs of Hollow Men by K.A. Rundell

Among the five stories within this particular week of DSF content, The Needs of Hollow Men is my choice for first among equals. From the title I had a horrible vision of a story about invisible people. Instead, the text presents itself as a grimy story of individual agency subjected to the good of a city-state amid a period of social decay.

Perhaps the strongest element of this story is its treatment of the psychic trope. Therein an empathic detective takes emotional suppressants as a means of amplifying the residual psychic footprints left on objects and people. The greatest crime the noir narration expounds upon, however, is not rape or murder, but two empathic individuals sharing an emotionally charged memory. It is certainly common enough to see science fiction mobilizing gifted individuals as resources, but the balance between pathos and logos is rarely so evenly struck as it is within this story. Pair this structural strength with the image of the broken down cop who has seen too much and it amounts to a truly compelling narrative.

My kudos to K.A. Rundell.

A Hairy Predicament by Melissa Mead

One of the benefits to a review project such as this is its ability to force me out of my critical comfort zone. Thus A Hairy Predicament is not something I would have read on my own. Yet it is impossible to ignore the inherent cleverness contained within this piece of writing.

The story combines the Brothers Grimm tales of Rapunzel and Jack and the Beanstalk, examining the logical aftermath of both stories. In doing so, Mead is able to turn these tired staples of storytelling into something new. With relatively few words she adds a significant amount of depth to what would otherwise be cookie cutter character archetypes. Nobody quite lives happily ever after in this piece, but the application of modern social responsibility to classic, and often grotesque, stories meant to scare children works quite nicely.

There’s a definite “real” world setting to the history of a woman who, through some supernatural power, keeps drawing maps indicating the significant life events of loved ones. Yet the story is set within a world where social workers and professional magi exist hand-in-hand. As a result, framing this story became something of a puzzle; is it new age mysticism or outright urban magic? Mayhap I should just call it slipstream and move on.

Since the protagonist, Christina, is something of a self-aware Cassandra, the narrative focuses on her self-imposed isolation from society at large. Naturally it’s hard not to feel some level of sympathy for the character. I initially read Christina’s self-mutilation as an attempt to mobilize body horror for shock value. Upon further thought, I think there’s some merit in seeing her self-harm as an allusion, if not an outright commentary, on society’s perceptions of those struggling with mental health issues.

My only point of contention with this story rests in its ending. The end is both sudden and jarring, leaving me unsure what to take from it. The story flows through Christina’s life, steadily building toward an act which will free her from foreknowledge. Once that act happens, her existence is left somewhat overly ambiguous. Can she actually live without the lifelong companionship of her maps? Or is one act of freedom going to lead to the ultimate act of freedom?

After reading this story I immediately thought, “This is what that Next movie should have been like.” The film, which drew a loose inspiration from PKD’s The Golden Boy, dealt with a con man who could see two minutes into the future. Five minutes’ protagonist more than doubles the abilities of Dick’s character.

Though five minutes of foresight is by no means a marginal thing, the story itself is a study into mediocrity. The protagonist doesn’t even rate a name; he is simply referred to as “the man” throughout the story, and he’s a Mets fan to top it all off (at least he’s not a Cubs fan). His heroism is a variation of the limited sort demonstrated in Greek myth when Jason carries Hera across a river. But where Jason went on to form the Hellenic Justice League, the man only catalyzes events within an appropriately small scope. We could then best view Five Minutes as a working man’s super hero story. There’s none of the perpetual handwringing of Spider-Man, but it also eschews the fetishes and god complexes of Watchmen. The man, like any normal, non-prescient person, seeks to find a purpose for himself, independent of his particular powers. In that, he is an endearing character in a story which presents a positive outlook for humanity.

Two dystopias, two stories of ESP, and one twisted fairy tale amounts to a good week of reading. I look forward to seeing what Daily Science Fiction offers up in the future. Also, at the time of this post, all of these stories are available to read, for free, on the DSF website.