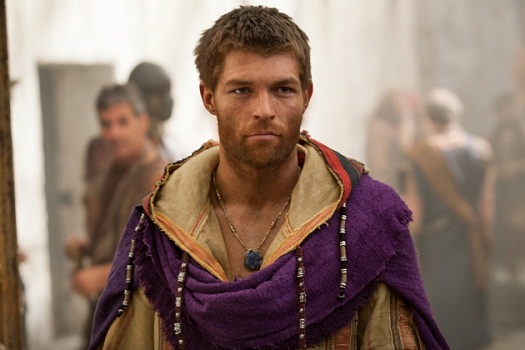 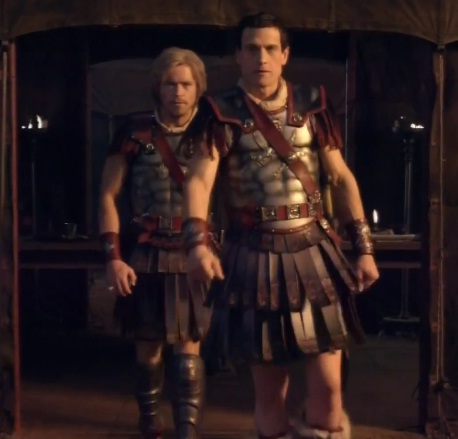 War of the Damned takes a few more steps in the deep footprints of HBO’s Rome. Meanwhile, Liam McIntyre casts aside all doubts about his ability to make Spartacus his own character.

Crassus continues to build his grand army, enlisting the help of an unshaven and heavily indebted Roman noble by the name of Gaius Julius Caesar. Meanwhile, Spartacus and Gannicus conduct a reconnaissance mission within the seaside city of Sinuessa. Therein, Spartacus must come to terms with the absolute human cost of the war he is visiting upon the Republic.

If Brad Pitt has a younger non-union counterpart, surely it must be Todd Lasance as Spartacus’ long haired and unshaven depiction of Gaius J. Caesar. And why not? Caesar’s early life is pock marked with time spent in exile, the loss of fortune under Sulla’s dictatorship, and pirate hunting in the Aegean sea. Caesar was only elected Questor, the lowest Roman political office, in 69 BC, so it’s perfectly reasonable for the series to cast him as a roughian looking to match fortune to family name in 72 BC. Ambitious and impetuous, Lasance’s Caesar plays a strong foil for the calculating, and almost respectable, Crassus. He’s also being written as potential deviant in a scene which pairs kinky blood play with (possible) fellatio. All the while Caesar’s notorious ambition, both political and sexual, resonates with John Hannah’s deceased Batiatus. Strange as it may sound, I think I missed hearing a British accent invoke “Jupiter’s cock” on a weekly basis.

In the past, Spartacus has dipped its toe in the complex structure of Roman familial politics. Seeing young Tiberius Crassus (Christian Antidormi) pine for his father’s approval, thus demonstrating the Pater Familias as a dominus in the most robust sense of the word, revisits this theme in a way not seen since the intrigues of Quintus and Titus Batiatus.

Similarly, it would be easy to dismiss Crassus’ desire to ditch his wife for favoured slave girl, Kore (Jenna Lind), as another example of Roman excess. Yet before we condemn Crassus as a lothario, and the writers as panderers, we would do well to remember the foundation of his relationship with Caesar. Crassus has wealth beyond reckoning, but lacks the family name to secure political office. In Rome, your name is your life, an idea well defined in the series’ first season. Therefore it is probably safe to assume Crassus’ marriage was arranged out of political convenience rather than any genuine affection. So when Crassus asks Kore, as a man rather than as dominus, what she would desire, he does so out of love. Once again we see the writers drawing a line between Crassus and Spartacus, whose whole rebellion against Rome was to avenge his wife’s death at the hands of Glaber and Batiatus.

Heavy is the Head

It may seem odd dwelling on Liam McIntyre’s acting as he is twelve episodes into his stint as Spartacus, yet it’s hard not to comment given the strength of this week’s performance. Sure, a blind person could see the foreshadowing when Spartacus comes across a cherub faced child and her mother in the streets of Sinuessa.

“Keep close to your mother,” says Spartacus, posing as a grain merchant when he’s in fact determining the best way to sack the city.

It’s the silent remorse on McIntyre’s face that  succeeds in selling the scene. As Romans, the mother and daughter are just as culpable for the institution of slavery as all those who gathered in the forum to participate in stoning a slave. But as people, Spartacus knows them to be innocent. They’ve done nothing to merit the violence about to befall their city. And in that moment, in a single look from Liam McIntyre, we see a world of doubt in the eyes of Spartacus. Of course, he’ll stay the course, but to my knowledge this is the first time Spartacus has ever had to look at the cost of his rebellion in terms of innocent blood spilled.

The plot thread is heart breaking stuff from the writers, delivered with first rate nuance from Mr. McIntyre. It also raises some doubt on the episode’s fundamental question: are the wolves Crassus and the Romans, about to march on Spartacus, or the slave army itself, bringing death and destruction in the name of freedom?

Let He Who Is Without Sin…Nevermind.

Early in the episode, Spartacus, Gannicus, and Crixus come across a slave being stoned in Sinuessa’s public square. Though I’m conceptually aware of how people might conduct themselves amid a stoning, I don’t think I’ve ever seen a more horrifying vision of it brought to life. The make-up and post-production team must have worked overtime on this scene. The combination of toned down, but none the less gruesome, splatter effects and perfectly timed switches between wide and tight shots sell the sequence as a truly horrifying demonstration of slavery as an institution. Moreover, it puts blood on Spartacus’ hands as he tosses the stone which prematurely ends what would have otherwise been a drawn out spectacle. Again, the episode effectively foreshadows the fact that Spartacus won’t get out of Sinuessa without dirtying his hands.

Other than serving as human props and fighting bodies amid the sacking of Sinuessa, Agron and Nassir are notably absent within this episode. In fact, second for second, I think they received less screen time than Naevia, who at least got to beat up the horse butcher from last week as the intro to this episode. But where I noticeably miss the screen presence of Pana Hema-Taylor and Dan Feuerriegel, I’m keen to see Cynthia Addai-Robinson’s Naevia get put to the sword.

Where Liam McIntyre has made Spartacus his own character, Addai-Robinson can make no such claim. Her berserker Amazon charm holds little appeal, less so when compared to the Artemis inspired fusion of power and tactical sense that was Katrina Law’s Mira. Yes, yes, I know Naevia is meant to be a story of female empowerment in the face of abuse and degradation. None of that changes the fact that her only real function was to motivate Crixus to rebellion. Say nothing for the fact that nobody had to gang rape Mira to make her a strong character in her own right.

Spartacus will never be HBO’s Rome, as much as I want it to be at times. However, Wolves at the Gate is the sort of episode that makes me appreciate just how much this show has evolved over the last three years. Try as I might, I can’t think of another series which began as a picayune exercise in titillation only to grow into genuine historical(ish) drama. While this week still sees some obligatory slave girl nudity, the episode eschews any of the series’ hallmark soft-core porn. Instead, the focus is on intrigue and characterization culminating in an impressive battle sequence.