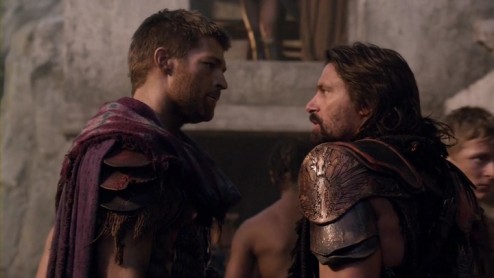 Crassus attempts to save face in the aftermath of his son’s defeat at Sinuessa’s gates. Within the city, the powder keg that is the slave army explodes.

Where the previous episode illustrated the growing cracks in the slave army, this week’s offering yields an outright schism. The revelation that Laeta (Anna Hutchinson) has been hiding Romans in the stables of Sinussea’s former Aedile spurs a confrontation between Gannicus and Naveia. From this spark, and continued food shortages, Crixus leads the rebels on a campaign of extermination within the city’s walls. Meanwhile Crassus teaches Tiberius a lesson in manhood as he orders his son to participate in the decimation of the fifty men who survived his failed attack on Spartacus.

A Nelson Muntz’ trademarked “Ha ha!” echoed through my head as visions of writers taking victory laps around their room filled my mind’s eye. Honestly, good on the writers. Dare I say this is an artful manipulation of audience expectations. After three seasons of Spartacus, vampire blowjobs hardly seem out of the ordinary for a rough and tumble Julius Caesar as played by Todd Lasance. Instead Crassus’ subtle intrigue reinforces the idea that he is a foe unlike any Spartacus has ever known. The sharp writing also stands as another example of the series’ ongoing discussion on body politics. It is pretty standard fare to witness a dominus/domina exploiting a slave; it’s another matter to contemplate a Roman noble ordering another to disfigure himself as a battle stratagem.

And then there’s Saxa

Since joining the cast in the third season, I’ve had little and less to say about Ellen Hollman’s portrayal of the Germanic warrior woman Saxa. During much of her screen time she’s either fighting, fucking, or firing off a one liner. The results are consistently shallow even when she is paired with Gannicus. However, a new thought occurred to me this week. Saxa is the Roman answer to Conan the Barbarian.

When the slave army’s officers are screening the entry of refugee slaves into Sinuessa, Saxa does a little hands-on investigation with a Roman slave girl. Because why not toss in some random girl-on-girl action, it’s cable, right?

Shortly afterwards the camera cuts to Nemetes (Ditch Davey) swindling an incoming slave out of his coin. How interesting. The male character is pilfering trinkets while the female is falling into the sexually exploitative and traditionally male role. Of course the exchange between Saxa and the slave was hardly forced. Rather it was the series’ usual mix of sultry and trashy. It’s moments like this that continue to make me object to the writers’ treatment of Naevia as a character. Saxa occupies a male space, fights and lusts like any other man, and, like Conan, seemingly all women swoon before her. All of this comes from within the character, and some consistent if previously ignored acting from Hollman, rather than as a reaction to external degradation. While I would never suggest all characters need to be the same, I would argue that Saxa, for all her past shallowness, is actually a better constructed character than Naevia.

The Wolves in Sheep’s clothing

Much like Saxa, Julius Caesar has been something of a slow burn character. Being that he’s Caesar, we know he will go on to do great things, if not in this series then in his inevitable spin-off. But in the first three episodes we saw little more than an obnoxious frat boy. Posing as a slave has finally given Lascance a chance to give Caesar some depth. When he must rape and torture Fabia, a captive Roman, to prove his loyalty to the rebellion, Caesar drops his slave facade and appears as a comforting figure. In that moment he’s not just some wild dog, but a man fighting for a cause. After mercy killing Fabia, Caesar makes a public show of her corpse and in doing so fans the flames of dissent which already exist within the camp.

With Caesar and Nemetes calling for Roman blood, Crixus dons the “kill all the Romans” mantle of leadership. But what’s bad for the rebellion is great for the audience. Manu Bennett and the late Andy Whitfield were at their best when their characters were at the other’s throat. Last season saw Crixus as Spartacus’ staunch ally, yet the transformation turned the Gallic champion into a brooding man-child. Now Bennett is crossing steel with McIntyre’s Spartacus, and the conflict is teeming with potential developments.

There are no good options, only the necessary ones.

Between the wholesale slaughter of Roman captives and the unrepentantly brutal decimation sequence, this episode further clouds the line between hero and villain. What really muddies the waters is the recognition that both parties are justified in their actions. Crixus’ frenzy is as much informed by the very real need to conserve dwindling food stores as it is revenge. Meanwhile Crassus must take decisive action to ensure the main force of his men fear their general more than they do Spartacus. Neither are good decisions per se, but they are necessary for survival. With Spartacus’ idealism seemingly an endangered commodity, the audience is left to ponder which side’s vision of freedom is best.

Where did all this tension between Agron and Nassir come from? Everything was fine in the first half of the episode. Then Nassir walks into a room accompanied by a Silesian and apparent implications of infidelity? I suspect something got lost on the cutting room floor.

In other WTF news, how is exiling the decimation’s survivors to the legion’s follower camp a punishment? I mean I know how it is supposed to be punishment, but sending a bunch of soldiers to live with slaves and prostitutes seems a bit more like a vacation than a shaming.

What I initially thought to be a slow episode rapidly built up speed in its second half. While there were no glorious battles, intercutting the decimation in Crassus’ camp with the slaughter in Sinussea demonstrates just how far both sides have fallen in their quest to be righteous. Even if the writers chose to ignore history, it is hard to see how Spartacus could truly be victorious in the aftermath of so much bloodshed. As for Crassus, this week proved his is the smartest character this series has ever seen.