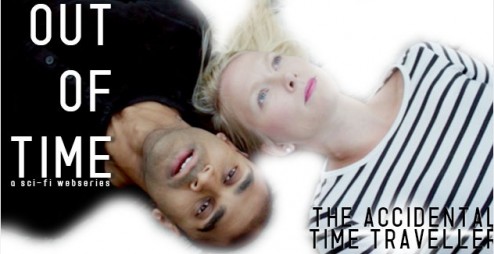 One week ago the director of Out of Time, Rodney V. Smith, offered me an insider’s glance at his upcoming web series. An experienced hand at online production, Smith’s past work includes the detective noir web series Dominion. Where Dominion explored a world of supernatural beings coexisting with humanity, Out of Time presents itself a story that marries contemporary corporate intrigue with time travel.

The series is also embarking upon a unique approach to funding its ten episode debut season. Anybody who backs Out of Time’s indiegogo campaign will gain immediate early access to the thirty minute prologue to the first season, The Accidental Time Traveller.

Considering the average runtime of a web series, thirty minutes dedicated to a pilot represents a substantial investment of time and labour. For comparison, the entirety of Felica Day’s Dragon Age web series ran approximately one hour in duration. This ambition is similarly reflected in the series’ plan to deliver individual episodes at a length of fifteen minutes. By the time the first season is done, Mr. Smith is going to have a feature length film on his hands.

Ambitious is similarly the word I would use to describe the scope of The Accidental Time Traveller. To watch this pilot is to see a self-contained short film which revels in asynchronous story telling. Therein, series protagonist Chris Allman (Steve Kasan) finds himself trapped within his own causality loop as he struggles to save the life of his murdered girlfriend Sara (Julia MacPherson). It is the sort of storytelling which makes Steven Moffat’s attempts to play the timey-wimey game on Doctor Who appear similar to a toddler splashing about in a wading pool. The sheer complexity of the time travel within The Accidental Time Traveler is best compared to 2004’s indie darling Primer.

The impressive visual effects within the pilot episode also merit some discussion. One thing of particular note is a scene when an actor walks through a digitally rendered computer readout. This may not sound impressive, but I expect the production of such a deceptively simple illusion required no shortage of work from the effects department. Moreover, it’s the sort of effect which makes me wonder what this series might be capable of producing once it secures greater funding.

Filming on location in Toronto over the spring of this year, the series is expected to release in March of 2014. For those interested in contributing to the production, there is an extensive breakdown of the project’s budget and production schedule on their Indiegogo page.

My thanks to Mr. Smith for offering me a preview of the series. Best of luck to the cast and crew in meeting their fundraising goal.

Find out more about the project at Out of Time’s webpage. Or head over to their indiegogo campaign to make a contribution.