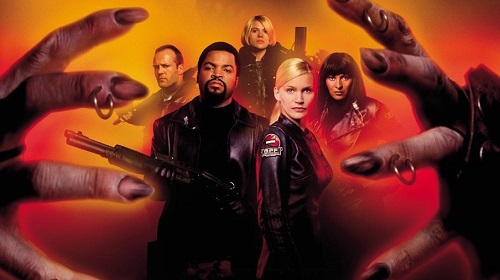 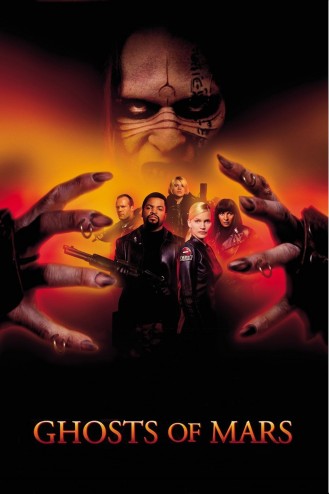 Over the weekend I found myself on a bit of a John Carpenter kick. Saturday afternoon I watched 1982’s The Thing. The next day I took on 1988’s They Live. Then on Tuesday, over an extended lunch break, I watched Carpenter’s 2001 turd Ghosts of Mars.

Twelve years ago, I walked out of the theatre half way through the film’s second act. In following years, I never once tried to watch it again. While seeing the movie from start to finish makes it no less of a turd in my eyes, it does furnish an opportunity to see the myriad of small failings which, if addressed, could have made for a decent experience.

Ghosts of Mars stands as a primer on narrative futility. The main thrust of the story emerges out of a series of flashbacks, the first of which has the movie’s protagonist, Lt. Melanie Ballard (Natasha Henstridge), riding alone into Mars’ capital city. When the next flashback introduces the audience to Henstridge’s team of eystone Martian cops, it’s pretty obvious that they are all going to die.

Call me old fashioned, but I thought the point of a horror movie was to leave the audience wondering who, if anybody, is going to survive the experience. Watching Henstridge read her lines to a board of inquiry (little of what she does in this movie approaches acting) ruins any potential tension. Yet with even the slightest application of a red pen this problem vanishes into the ether.

In 2001 Natasha Henstridge’s claim to fame was taking her clothes off in Species and Species 2 – paging Seth MacFarlane. By comparison Pam Greer, who plays Henstridge’s commanding officer, Commander Helena Braddock, survived 70s Blacksploitation to become Jackie Brown, a role which netted Greer Golden Globe and SAG Award nominations. Based on resumes alone, who should be the kick-ass hero, and who should be the expendable meat sack that dies to mark the ending of the first act? This movie would instantly be better with Pam Greer as Lt. Ballard.

Okay, bear with me on this one because the movie spends so much time shoving the “Martian matriarchy” up its own ass I couldn’t quite figure out what, if any, significance/subtext it is supposed to convey. Even though Mars is an Earth colony, subject to the enigmatic “cartels” (Don’t ask, I don’t know), there’s been a gender role swap during the colonization. This sociological Freaky Friday turns “the Man” into “the Woman”, as elucidated by Ice Cube, who is a special kind of terrible in this movie.

The matriarchal kink also enables a creepy sexual politics in the movie’s first act. Therein Commander Braddock makes a pass at Lt. Ballard; the direct implication is that Ballard will only make Captain after consummating a sexual liaison with her CO. Moreover, heterosexuals on Mars are referred to as “breeders.” A pre-Transporter Jason Statham further suggests that straight people are a rare sort on Mars, so why not have some casual sex?

Let the record show that I have no problem with a movie subverting hetero-normative power structures. But what’s the point in rubbing the audience’s nose in something alienating only to do nothing with it in the long run? What possible reason is there to make Pam Greer play a lesbian sexual predator when she dies twenty-five minutes later? Ditch the weirdness in favour of narrative clarity or meaningful character motivations, and, once again, the movie would heal itself.

This is just storytelling 101. Seventy-five minutes into a ninety-five minute movie sees the two redshirts among the Martian police cadre still alive and kicking. What do they do during that time? Mostly hang about like glorified extras. I couldn’t even tell you the two character’s names without looking it up on IMDB. In a survival-horror movie, there’s no reason for Privates Expendable and Cannon Fodder to still be alive.

Change the Name to Ghosts of Utah

When I think “Mars”, I don’t think trains, mining towns, and federal marshals rounding up prisoners to stand trial for murder; for these are the trappings of a Western. For want of space suits, actual physical Martians, or even a laser pistol, there’s no good reason for this movie to be set on Mars. It should be set in a mining town in 1885. I would pay real money to see a movie about shotgun and pistol armed US Marshals having to deal with ancient ghosts creating a zombie army. The best part: we can still have Pam Greer as Lt. Kick Ass without breaking history – Ada Carnutt was a Deputy U.S. Marshal in Oklahoma Territory in 1893. With a few set and costume changes the movie becomes something requiring a dram of suspension of disbelief instead of a metric ton.

In the end, what is Ghosts of Mars if not an ineffective alien movie, masquerading as a zombie movie, wearing all the trappings of a Western? But imagine what it could have been with just a few changes. It is teeming with potential for a modern Western six years before 3:10 to Yuma’s remake hit the big screen. Meanwhile, this much better hypothetical movie could have maintained all the Carpenter trademarked horror tropes while working within the conventions of a Western. Perhaps then Carpenter would not have gone into self-imposed directorial exile for nearly a decade.